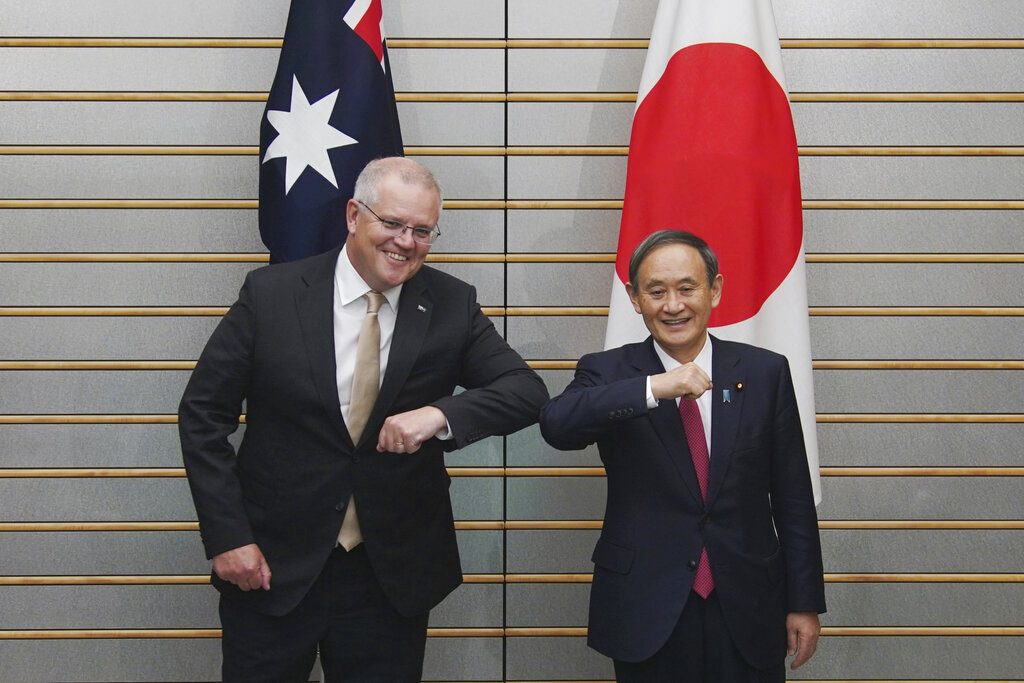 The leaders of Australia and Japan held in-person talks on Tuesday and reached a basic agreement on a bilateral defense pact that would allow their troops to work more closely, as the two U.S. allies seek to bolster their ties to counter China’s growing assertiveness in the Asia-Pacific region.

Australian Prime Minister Scott Morrison and his Japanese counterpart, Yoshihide Suga, said the legal framework, called a Reciprocal Access Agreement, would allow their troops to visit each other’s countries for training and joint operations. It would also enhance their interoperability and cooperation, they said.

The deal is the first of its kind for Japan since its 1960 status-of-forces agreement with the United States, which set the terms for the basing of about 50,000 American troops to operate in and around Japan under the Japan-U.S. security pact.

Morrison called the defense agreement a “landmark” development for the two countries, which are both allies of the U.S. while maintaining significant trade with China. Australia and Japan also have very strong and positive relations with all countries in the Indo-Pacific, he said.

Japan is committed to maintaining and deepening its 60-year-old alliance with the U.S. as the cornerstone of its diplomacy and security, but has in recent years sought to complement its regional defense by stepping up cooperation with others, especially Australia, amid growing Chinese maritime activity.

Abe pushed for greater military cooperation and weapons compatibility with the U.S. as Japanese forces increasingly work alongside U.S. troops. He also increased purchases of costly American stealth fighters and other weapons.

Suga, who took office in September after Abe resigned due to ill health, is continuing his predecessor’s diplomatic and security policies.

Japan considers Australia to be a semi-ally and the two countries signed a defense cooperation agreement in 2007, a first for Japan with a country other than the U.S. The two nations agreed on the sharing of military supplies in 2013 and expanded the deal in 2017 to include munitions after Japan eased restrictions on arms equipment transfers.

In a joint statement, Suga and Morrison expressed “serious concerns about the situation” in the South and East China Seas and “strong opposition” to militarizing disputed islands and other unilateral attempts to change the status quo, without identifying China — signaling their sensitivity toward their biggest trading partner.

Japan has initiated a vision of economic and security cooperation called the “Free and Open Indo-Pacific” as a counter to China’s influence, and recently hosted talks among the foreign ministers of four countries known as the Quad — Japan, the U.S., Australia and India.

Those four nations are now seeking to add more countries, from Southeast Asia and beyond, that share concerns about China’s growing assertiveness in the region.

Tuesday’s basic agreement on a Japan-Australia defense pact comes as the navies of the Quad nations hold a joint exercise in the Northern Arabian Sea seen as part of their regional initiative to counter China.

China defends its actions in the regional seas as peaceful and denies violating international rules. It has criticized the Quad as an “Asian NATO” to counter China.