With 2 Vaccines on the Horizon, Here’s What You Need to Know

With the pandemic cutting an ever-broadening swath through the country, Moderna’s announcement that preliminary data indicate its COVID-19 vaccine was 95% effective offered Americans a much-needed shot of hope.

It was the second time in as many weeks that independent safety monitors had examined clinical trial data and determined that an experimental vaccine was performing above expectations. Last week, Pfizer, in collaboration with its German partner BioNTech, said its vaccine was 90% effective in preventing symptoms of the disease.

“The light at the end of the tunnel is getting a little brighter,” said Dr. William Schaffner, an infectious-disease and preventive-medicine expert at Vanderbilt University.

The news comes as multiple states issued new lockdown orders in an effort to stop another wave of coronavirus infections. More than a million new cases were recorded last week alone, and more than 1,100 Americans are dying each day.

Pfizer and Moderna have yet to release detailed data from this final stage of clinical trials, and the results may change by the time they’re complete. But many experts are optimistic that initial distribution of these vaccines could begin by year’s end.

“The results from Pfizer, and now Moderna, gives me a great deal of encouragement,” said Dr. Buddy Creech, director of the vaccine research program at Vanderbilt University Medical Center. “The effectiveness levels are beyond our expectations, giving us firm hope that we will see an end to the pandemic once widespread vaccination is possible.”

Here’s a closer look at where things stand with these front-running vaccines.

A. The clinical trials are measuring how good experimental vaccines are at reducing a person’s risk of becoming infected with the coronavirus that causes COVID-19.

To do this, researchers recruited volunteers who were given two doses of either the vaccine or a placebo without knowing which was which. Then they were encouraged to continue everyday activities. 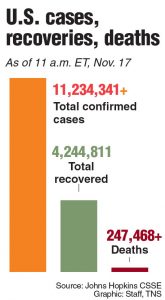 The trials were designed for an assessment to be made after a pre-specified number of volunteers came down with COVID-19. The Moderna trial, for instance, enrolled 30,000 participants and planned to stop after 151 cases were recorded. So far, 95 individuals have become sick, which was enough for the data monitoring board to provide an early assessment of the vaccine’s efficacy. Participants will continue to be evaluated to see how the vaccine performs over time.

The conclusion was that after three months of exposure in typical communities around the country, about 29,900 individuals in the Moderna trial remained symptom-free. Of the 95 who became ill with COVID-19, 90 were in the placebo group, and five had received the vaccine.

This information allowed the review board to conclude that the vaccine had 94.5% effectiveness. The data are still being evaluated to determine why 5% of those inoculated with the vaccine got ill.

The numbers are similar to the Pfizer trial, which enrolled 44,000 people. However, unlike Moderna, Pfizer did not provide information about disease severity among participants.

“The stunning and hopeful news is that the vaccine had an important and positive effect in reducing getting sick,” said Dr. Larry Steinman, professor of pediatrics and neurological sciences at Stanford University who was chair of the immunology department program for 10 years.

Q. Why aren’t all the volunteers given the vaccine?

A. Researchers need something to compare their vaccine against so they can assess whether it’s better — or worse — than doing nothing. In this case, the placebo is merely a saline solution.

“Placebo-controlled trials are the best way to take bias out of the equation,” said Vanderbilt’s Creech. “They allow us to see how well a vaccine works. By randomizing and by staying ‘blinded’ as to what a volunteer received, we are able to more fairly judge whether the vaccine works.”

The study design also helps researchers identify side effects caused by the vaccine. For instance, if those who received the placebo complained of sore arms as much as those who got the vaccine, it would be reasonable to conclude that the soreness is the result of the needle and not necessarily due to the vaccine’s active ingredients.

Q. If the results are so good, why are they still testing the vaccine?

A. More time is needed for more study participants to become sick. The more cases there are, the more certain researchers can be about saying the outcomes for the two groups of volunteers are different — and that the vaccine performed better than the placebo.

Some side effects may take a while to develop as well, and the trial has to last long enough to give them a chance to crop up.

In general, clinical trials may be stopped ahead of schedule if the early data make it obvious that an experimental medication is completely ineffective, or when the results are so favorable that it is no longer ethically responsible to deny it to those who got the placebo.

Q. What kinds of side effects have been seen so far?

A. They’ve all been minimal. Some participants have reported a sore arm for a day or two. Some complained of headaches and fatigue, as well as general muscle aches and pain. None of these is considered a severe adverse reaction.

Even trials of this size might not be able to detect very rare adverse events, which is why even after a vaccine is approved, monitoring systems continue to look for these rare events in the broader population. 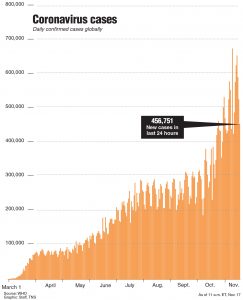 Q. When will we get final results about the Moderna and Pfizer vaccines?

A. These clinical trials were designed as two-year studies, so it’s not clear when the final results will be available.

But final results are not necessary for the Food and Drug Administration, which is tasked with vetting new medications for public use, to decide whether to grant any COVID-19 vaccine an Emergency Use Authorization and allow it to be made available to the public. If such an authorization is given, then vaccines could start to be distributed by December.

Q. Are there any other vaccine candidates currently being tested?

A. Vaccines being developed by AstraZeneca and Johnson & Johnson are also considered viable contenders.

Both are in the late-stage clinical trials, with enrollment continuing around the world. These vaccines are made slightly differently from the ones from Pfizer and Moderna, but because they target the same protein on the surface of the virus, “we have a lot of confidence that they may enjoy similar efficacy,” Creech said.

Q. How soon can I get the vaccine?

A. If the FDA issues an Emergency Use Authorization, the Centers for Disease Control and Prevention will be in charge of overseeing the vaccine’s distribution to the public. States will develop their own plans as well. While there’s still a lot of uncertainty, it’s already clear that there won’t be enough vaccines to go around at first.

Early prioritization schemes put health-care workers at the front of the line. They’ll be joined by older individuals and those with underlying medical conditions, because people in these groups are more likely to become severely ill if they are infected.

Both Pfizer and Moderna have publicly reported that they will have about 20 million doses by the end of the year, but experts believe it will take until late spring or early summer to produce enough vaccine to immunize a majority of U.S. residents.

But experts say that public-health protocols such as wearing masks and maintaining social distance must remain in place for months or even years after vaccines first become available.

What remains to be answered is whether these vaccines will keep people from getting infected. As promising as these trials are, it is not known if the vaccine will stop the spread of the virus.