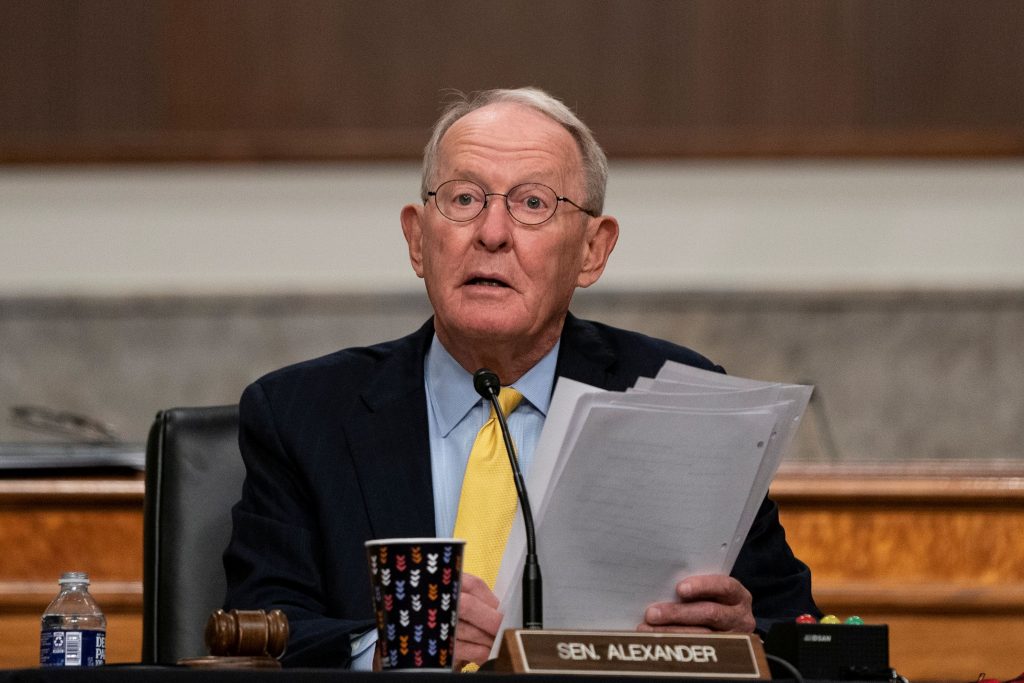 Sen. Lamar Alexander, R-Tenn., on Monday said he would not support the nomination of Judy Shelton to the Federal Reserve’s board of governors, narrowing the path for the controversial economist’s confirmation in the final months of the Trump presidency.

Alexander joins Sens. Susan Collins, R-Maine, and Mitt Romney, R-Utah, who said they would vote “no” over the summer.

“I oppose the nomination of Judy Shelton because I am not convinced that she supports the independence of the Federal Reserve Board as much as I believe the Board of Governors should,” Alexander said in a statement to the Washington Post. “I don’t want to turn over management of the money supply to a Congress and a President who can’t balance the federal budget.”

Shelton’s nomination to the Fed board has been controversial from the start. In her past writings and remarks, Shelton has said the Fed harnesses too much power and should be reined in. Shelton, who advised Trump’s 2016 presidential run, has also caused lawmakers to question her commitment to the Fed’s independence from the White House, a core part of the central bank’s reputation and authority. She has also been outspoken against the Fed as an institution.

Before the coronavirus pandemic thrust the economy into a sudden recession, Shelton altered some of her views to appear in closer agreement with Trump’s aggressive push for lower interest rates. On policy, Shelton has also called for a return to the gold standard, which the nation fully abandoned in 1971.

There’s widespread agreement that the Fed’s seven-seat board benefits from a range of perspectives and opinions. But Shelton’s critics say her views make her too much of an outlier to set monetary policy at the central bank, and that the stakes are especially high as the economy fights its way out of the covid crisis.

Democrats are also expected to oppose Shelton’s nomination, and Republicans hold a 53-47 majority in the Senate. It is unclear whether Vice President Mike Pence, who is marshaled in to break ties in the Senate, will have to do so; a spokesman for Alexander said he will not be in Washington this week due to family matters, so he won’t be present to vote on the nomination if it occurs this week.

But Sen. Rick Scott, R-Fla., who is expected to support Shelton, will be in quarantine this week, according to spokesman Chris Hartline, after coming into contact with someone Friday night in Naples, Fla., who later tested positive for the coronavirus.

Asked whether Republicans have the votes to confirm Shelton, Senate Majority Whip John Thune, R-S.D., the party’s chief vote-counter, said “We hope so.”

“As you know, we have some attendance issues,” Thune said.

If Scott and Alexander both miss the vote, it could come down to a 49-49 tie if Vice President-elect Kamala Harris votes. In that scenario, Pence would be needed to break the tie.

And if the vote drags into early December, incoming Sen. Mark Kelly, D-Ariz., will be seated, likely imperiling Shelton’s chances.

Trump’s other pick for the second Fed vacancy has been far less controversial. Yet it’s unclear when or if Republicans will move to confirm Christopher Waller, a St. Louis Fed economist, by the end of the year.

Last week, Senate Majority Leader Mitch McConnell, R-Ky., took procedural steps to set up a vote on Shelton’s long-pending nomination, suggesting his party’s leadership believed they had enough support to move forward. For much of 2020, Shelton’s prospects have looked dicey given her controversial views on the Fed’s independence and the gold standard.

Even among Republicans, Shelton’s nomination has appeared in jeopardy multiple times. Earlier in the year, Republicans on the Senate Banking Committee raised concerns about Shelton’s monetary policy views and whether she could maintain the central bank’s independence, which is core to the Fed’s reputation and authority.

Then in September, Sen. John Thune, R-S.D., suggested Shelton didn’t have enough votes to be confirmed. At the time, Thune said conversations about Shelton’s nomination “kind of got eclipsed by the coronavirus discussion” and related stimulus negotiations.

“We’re still working it,” Thune said at the time. “She’s a priority for the White House. It’s the Federal Reserve. It’s important, so obviously we want to get it done. But we’re not going to bring it up until we have the votes to confirm her.”