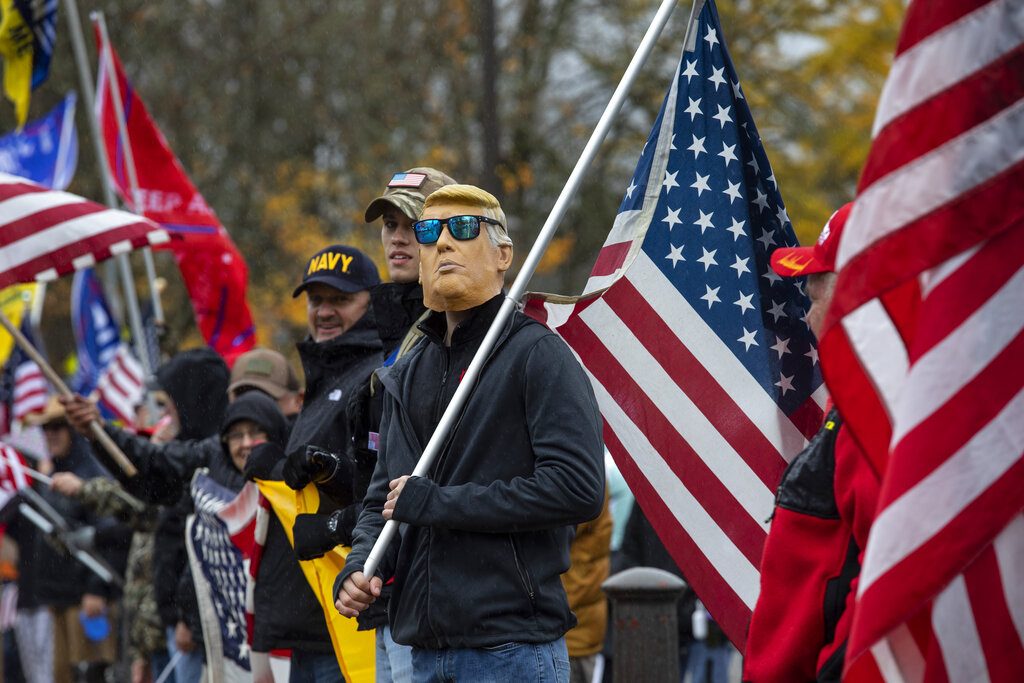 After several thousand supporters of President Donald Trump protested the election results and marched to the Supreme Court, nighttime clashes with counterdemonstrators led to fistfights, at least one stabbing and more than 20 arrests.

The demonstrations in the nation’s capital went from tense to violent during the night and early Sunday. Videos posted on social media showed people demanded Trump supporters take their MAGA hats and banners and leave, and the situations escalating into violence. Police said they made 21 arrests on a variety of charges, including assault and weapons possession, and recovered eight firearms. Four officers were injured. No arrest has been made in the stabbing, and the victim was hospitalized with non-life threatening injuries.

Trump himself had given an approving nod to the gathering Saturday morning by sending his motorcade through streets lined with supporters before rolling on to his Virginia golf club. People chanted “USA, USA” and “four more years,” and many carried American flags and signs to show their displeasure with the vote tally and insistence that fraud was the reason for the results.

A broad coalition of top government and industry officials has declared that the Nov. 3 voting and the following count unfolded smoothly with no more than the usual minor hiccups — “the most secure in American history,” they said.

In Delray Beach, Florida, several hundred people marched, some carrying signs reading “Count every vote.” In Lansing, Michigan, protesters gathered at the Capitol to hear speakers cast doubt on results that showed Biden winning the state by more than 140,000 votes. Phoenix police estimated 1,500 people gathered outside the Arizona Capitol to protest Biden’s narrow victory in the state. Protesters in Salem, Oregon, gathered at the Capitol.

The marchers included members of the Proud Boys, a far-right group known for picking fights with ideological opponents at political rallies.

Multiple confrontations appeared later in the day as small groups of Trump supporters attempted to enter the area around Black Lives Matter Plaza, about a block from the White House, where several hundred anti-Trump demonstrators had gathered.

In a pattern that kept repeating itself, those Trump supporters who approached the area were harassed, doused with water and saw their MAGA hats and pro-Trump flags snatched amid cheers. As night fell, multiple police lines kept the two sides apart.

In preparation, police closed off wide swaths of downtown, where many stores and offices have been boarded up since Election Day. Chris Rodriguez, director of the city’s Homeland Security and Emergency Management Agency, said the police were experienced at keeping the peace.