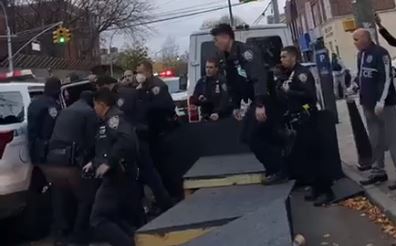 An emotionally disturbed man was Tasered and arrested after brandishing a stick and acting bizarrely in a Midwood pizza store Sunday afternoon.

The incident occurred around 2:40 p.m. in Pizza Express, a kosher shop on Avenue K near Nostrand Avenue, according to the NYPD and the store owner, who spoke with Hamodia.

The 27-year old man entered the store, brandishing a stick, and asked for a job. Told none was available, he then asked the cashier for the “good luck” dollar bills taped to the wall behind the register. When the cashier declined to give them to him, the man threatened that if she refused to give him the money, he will touch the salad bar – but he was unable to do so because it is surrounded by glass.

The man then went to the bathroom, and store employees took the opportunity to call 911.

Police arrived and tried speaking with the man. He began touching a pouch he was carrying; they warned him to take his hands away from the pouch and keep them visible, but he did not comply. Eventually, a struggle ensued, with the man on the floor. Police called for additional units, as the man continued resisting, and he was eventually Tasered.

Video posted to social media shows the man forcefully resisting arrest even after he was Tasered and being led out to the police car. Eight police officers were ultimately transported to local hospitals for minor injuries sustained in the altercation.

The man was brought to the 63rd precinct stationhouse, whereupon EMS personnel arrived and took him to Kings County Hospital.

As he appears to be emotionally disturbed, he will likely be treated but not charged.