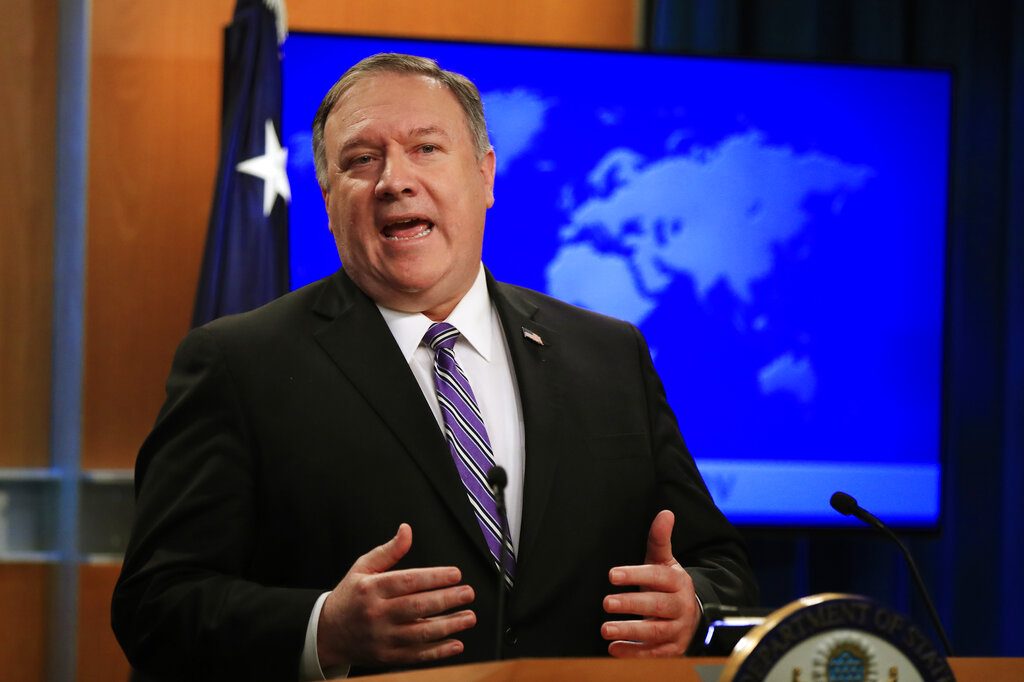 Secretary of State Mike Pompeo discussed “global challenges” with a handful of members of a Paris think tank Saturday at the start of a seven-country tour of Europe and the Middle East, travels that were certain to be awkward since all the nations on his schedule have congratulated Joe Biden for winning the White House.

Pompeo was an all but invisible U.S. envoy on what may be his last official trip to France, tweeting out news of his arrival and from his private meeting with members of the Institut Montaigne, accompanied by photos.

The trip is aimed at shoring up the priorities of the outgoing administration of President Donald Trump. It will include visits to Israeli settlements in the West Bank that have been avoided by previous secretaries of state.

The United States’ top diplomat — as well as its president and much of his Republican Party — have not accepted the results of the American election, and the unusual circumstances will likely overshadow the issues.

In a tweet, Pompeo said he addressed “the global challenges we are facing today, from terrorism to the COVID-19 pandemic” with Institut Montaigne representatives. The independent think tank says it promotes “a balanced vision of society, in which open and competitive markets go hand in hand with equality of opportunity and social cohesion.”

Pompeo arrived to a France in lockdown to fight a second wave of the coronavirus.

Pompeo may find himself doing heavy-lifting on Monday, when he is scheduled to meet French Foreign Minister Jean-Yves Le Drian and President Emmanuel Macron. According to Macron’s office, the French president spoke with Biden by phone four days ago and conveyed his desire to work together in areas such as climate change, terrorism and health.

For the outgoing secretary of state and the French officials, Monday’s meetings will be a delicate demarche on tough issues.

”For the moment, my counterpart is Mike Pompeo, until Jan. 20…” Le Drian said Friday on French network BFMTV, referring to the date when Trump’s term ends. “He’s coming to Paris. I receive him.”

Le Drian noted the “difficult subjects” on the table, from the situation in Iraq and Iran to the Middle East and China.

He said he plans to speak out on any accelerated withdrawal of U.S. troops from Iraq and Afghanistan, clearly concerned that Trump could end his presidency with such a move.

“What he should not do, in our opinion,” Le Drian said of a full withdrawal from Afghanistan. “What should not be done either in Iraq, [we] will tell him.”

Macron has had a tense relationship with Trump. Both leaders initially worked to woo each other with gestures of extravagance, such as Macron making Trump the guest of honor at a Bastille Day military parade. Trump later pulled out of the Paris global climate accord, a blow to Macron.

The United States also left the hard-won Iran nuclear accord, and Pompeo said in a tweet before departing on his trip that “Iran’s destabilizing behavior” would be among topics of discussion.

In an arrival tweet Saturday in France, Pompeo laid out the standard diplomatic groundwork for his Paris talks, noting that France is the “oldest friend and Ally” of the United States. “The strong relationship between our countries cannot be overestimated,” he tweeted.

Promoting religious freedom and countering terrorism were also among topics on the table during his trip, he tweeted. Both issues are keenly relevant to France. There have been three terror attacks in recent weeks in France that have killed four people, linked to recently republished caricatures of the prophet of Islam. Anti-France protests rolled through some Muslim countries after Macron insisted on his nation’s respect for freedom of expression, including the right to draw caricatures.

After France, Pompeo’s tour takes him to Turkey, Georgia, Israel, the United Arab Emirates, Qatar and Saudi Arabia. The leaders of all those countries have offered public congratulations to Biden.

Beside France, Turkey, Georgia and Qatar have had fractious relationships with the Trump administration, and it was not clear whether Pompeo planned public engagements with their leaders — or whether he would take questions from the press, with whom he has had a frosty relationship.

The administration’s relations with Turkey have been particularly strained after the NATO ally’s purchase of a Russian missile defense system, and Pompeo’s stop in Istanbul next week will not include meetings with Turkish officials. Instead, Pompeo will meet with religious leaders to highlight his promotion of religious freedom.

Palestinian officials, who have been snubbed by the Trump administration, have denounced Pompeo’s plans to visit the Jewish community of Psagot in the Shomron. Palestinian Prime Minister Mohammad Shtayyeh tweeted on Friday that this was a “dangerous precedent” that legalizes settlements.

In keeping with Trump’s refusal to concede, and orders for Cabinet agencies not to cooperate with the Biden transition team, the State Department has not been involved with facilitating Biden’s calls to foreign leaders, according to officials familiar with the process.

At a news conference Tuesday, Pompeo said he would carry on as if there was no change.

Yet his French counterpart Le Drian has been looking toward the future, saying last Sunday in Cairo that “we will work with the new president of the United States and his team in the framework of new trans-Atlantic relations, we will need to re-found this.”