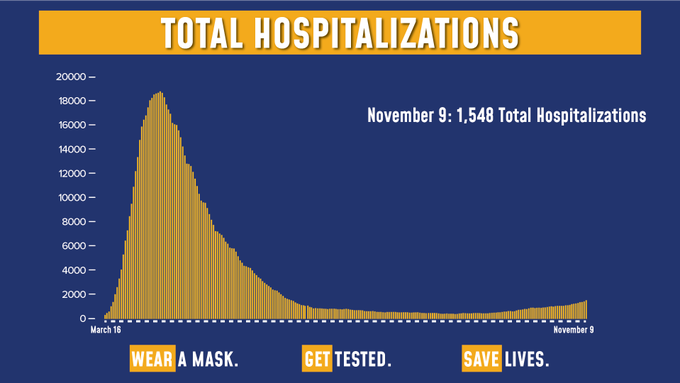 New York reported an uptick in coronavirus cases and hospitalizations Tuesday that the state has not seen for months.

Nearly 150 people were hospitalized a day earlier, bringing the statewide total to 1,548 — a number not seen since mid-June.

Another 32 New Yorkers died of the virus on Monday, according to Gov. Andrew Cuomo, who warned against “COVID fatigue” and encouraged people to take precautions seriously as cases continued to rise across the country.

“While we may be tired of COVID, it is not tired of us,” the governor said. “It’s clear that COVID fatigue and a lack of compliance leads to viral spread, so it’s more important than ever that as we prepare for winter, each of us stays smart and New York Tough by taking simple everyday actions like washing hands, wearing masks and socially distancing.”

That’s the highest positivity rate the state has seen since May 26 and the largest number of new cases since May 1, according to Department of Health data.

However, the governor’s office cited data from Johns Hopkins University that shows New York had the nation’s third-lowest positivity rate over the past week — trailing only Vermont and Maine for the lowest number of cases reported.

Mayor Bill de Blasio has repeatedly warned that if the city’s numbers remain high it could lead to public schools being closed and force the city to enforce tighter restrictions on businesses again.

“This is our last chance to stop a second wave. If we aren’t able to stop it, there will clearly be lots of consequences that will remind us to much of where we were before,” he said.