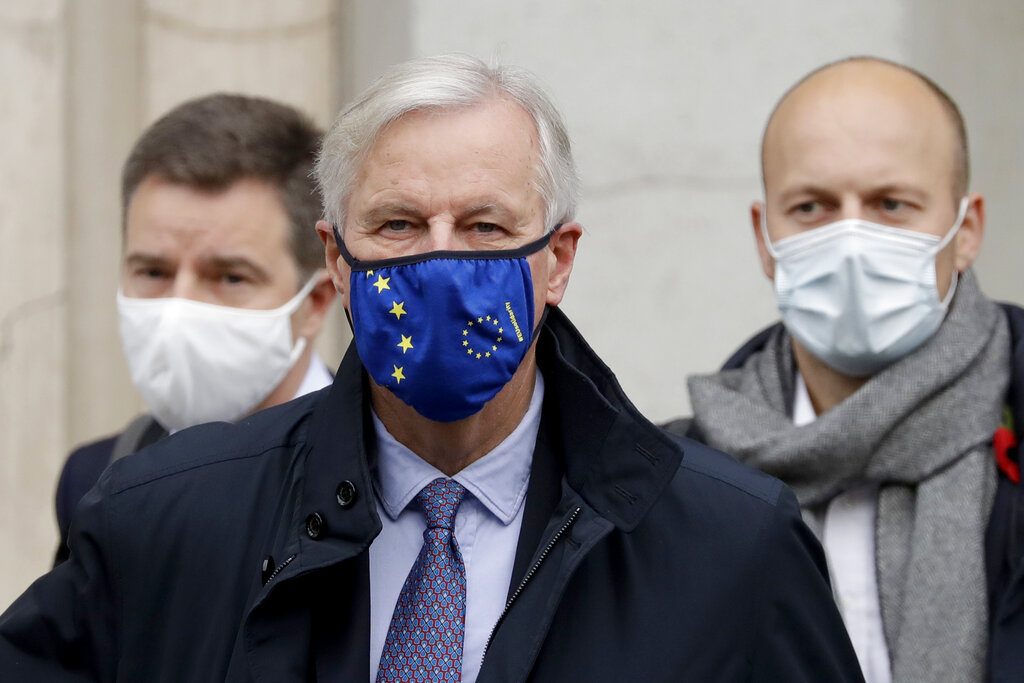 Negotiators from Britain and the European Union were meeting Monday to seek a breakthrough in gridlocked trade talks, with just days until a deadline to strike a post-Brexit deal.

EU chief negotiator Michel Barnier is due to meet his British counterpart, David Frost, in London, after both sides warned there is little time to bridge big differences between them.

Although Prime Minister Boris Johnson said Sunday that a deal is “there to be done” before the two sides’ mid-November deadline, obstacles remain over fishing rights and competition rules. On top of that, controversial legislation from Johnson’s government threatens to derail a deal.

Johnson has infuriated the EU with a bill that breaches parts of the legally binding withdrawal agreement that allowed for Britain’s exit from the bloc in January. The Internal Market Bill gives the U.K. power to override sections of the agreement dealing with Northern Ireland trade.

The U.K. acknowledges that the bill breaches international law, and the legislation has been condemned by the EU, President-elect Joe Biden and scores of British lawmakers, including many from Johnson’s Conservative Party.

On Monday, Parliament’s upper chamber, the House of Lords, is set to remove the law-breaking clauses from the legislation. The government says it will restore them when the bill returns to the House of Commons in the coming weeks.

It says the bill is needed as an insurance policy to ensure smooth trade among all parts of the U.K. no matter what happens to U.K.-EU trade after Brexit.

“Any amendments will be considered when they return to the House of Commons, but we do consider these clauses to be a vital safety net,” the prime minister’s spokesman, James Slack, said Monday.

Biden, who was declared winner of the U.S. presidential election on Saturday, has warned that Northern Ireland’s Good Friday peace agreement can’t “become a casualty of Brexit.”

Charlie Falconer, who served as justice minister in a previous Labour government, said the bill was making the U.K. an “international pariah.”

“The House of Lords is doing the government a favor by seeking to take out these lawbreaking provisions now,” he told Sky News.

Britain left the EU’s political structures on Jan. 31 but remains in its economic embrace until a transition period ends on Dec. 31.

Frost and Barnier have both warned that serious “divergences” remain between the two sides as they seek a new trading relationship. Britain and the EU both say they want a deal, but their views of what that means are fundamentally at odds.

The bloc accuses Britain of wanting to “have its cake and eat it” — retaining access to the EU’s lucrative markets without agreeing to follow its rules. The EU fears Britain will slash social and environmental standards and pump state money into U.K. industries, becoming a low-regulation economic rival on the bloc’s doorstep.

Britain says the EU is making unreasonable demands and is failing to treat it as an independent, sovereign state.

If there is no deal, businesses on both sides of the English Channel will face tariffs and other barriers to trade starting on Jan. 1. That would hurt economies on both sides, with the impact falling most heavily on the U.K., whose economy is already reeling under the coronavirus pandemic.