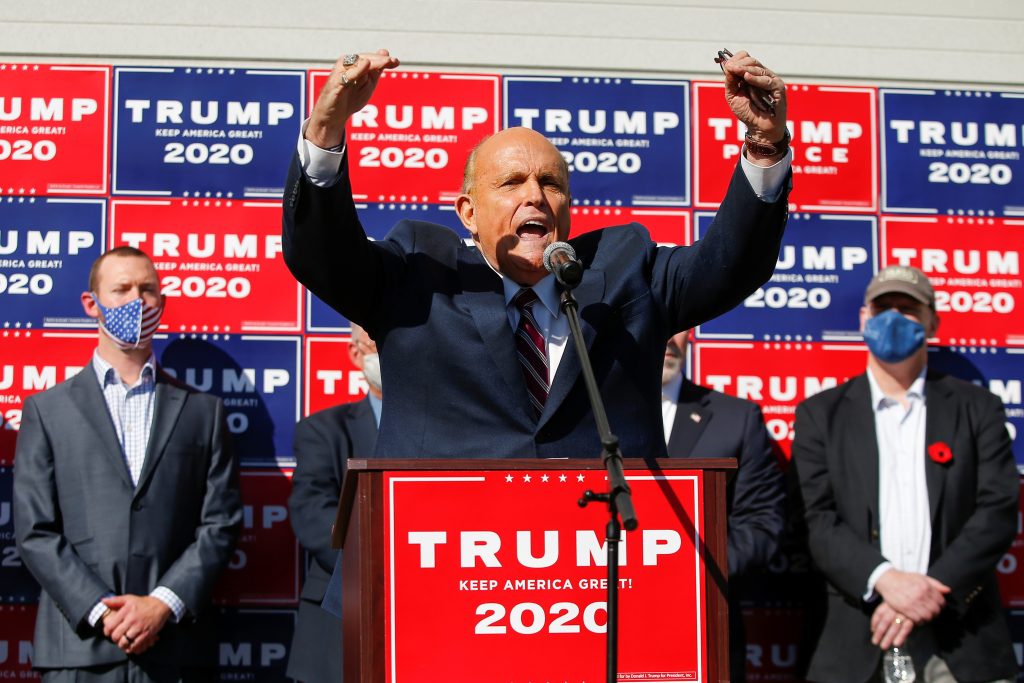 “Obviously he’s not going to concede when at least 600,000 ballots are in question,” Giuliani claimed, shortly after the presidential race had been called in favor of President-elect Joe Biden.

Giuliani has not yet produced any concrete evidence for his fraud claims.

Trump’s team has brought legal challenges in several states he would need to retake the election from Biden – and although he has had some wins, none of them has changed the actual vote count.

Legal experts say that none of the lawsuits filed so far are likely to overturn the election results.

Since Trump’s lead began to slip in several battleground states as more Biden-favorable mail-in ballots were counted, the president has claimed that the election was being “stolen” from him and has alleged massive fraud.

He also alleged the same type of mail-in ballot fraud occurred in Wisconsin, Michigan, Nevada and Arizona, all states where Biden has been declared the winner.

“What it says to me is this is a concerted effort of the Democrat Party,” he claimed.

Giuliani said the election would be decided by the people and he wouldn’t let Democrats “steal” it.

After Biden was declared the winner, Trump said in a statement, “We all know why Joe Biden is rushing to falsely pose as the winner, and why his media allies are trying so hard to help him: they don’t want the truth to be exposed. The simple fact is this election is far from over.”

Giuliani said they would bring a second lawsuit in Pennsylvania, “and then we’re going to bring a federal lawsuit and we’re going to take a very good look at whether we bring this nationally…. Quite possibly, we’ll do a national lawsuit and really expose the corruption of the Democrat Party.”

Giuliani said he had never seen a candidate ahead by hundreds of thousands of votes only to watch their lead quickly slip away. In Pennsylvania, in-person Election Day votes, which highly favored Trump, were counted first, then mail ballots, which heavily leaned for Biden, were counted second, cutting into and ultimately overtaking the president’s lead.

Trump’s adult sons, Donald Jr. and Eric, have also urged their father to keep fighting and challenged Republicans to stand with them.

Other political allies and White House officials, however, have pressed Trump to change his tone and commit to a smooth transition. They’ve emphasized to him that history will be a harsh judge of any action he takes that is seen as undermining his successor. And they have advised him to deliver a speech in the coming week pledging to support the transition.

Trump senior adviser and son-in-law Jared Kushner has told others that he has urged the president to accept the outcome of the race — even if Trump won’t come to terms with how it was reached.