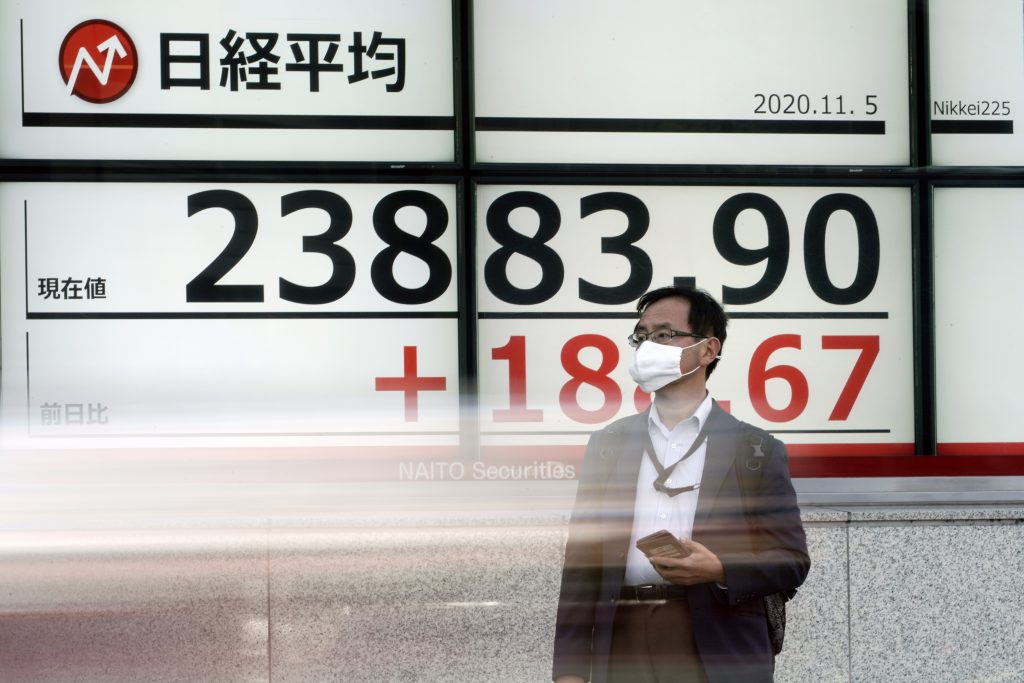 U.S. futures and world shares surged on Thursday as investors awaited the outcome of the U.S. presidential election and embraced the upside of more gridlock in Washington.

European markets opened higher after a day of gains in Asia, while the fate of the U.S. presidency remained undecided as neither President Donald Trump or Democratic challenger Joe Biden had secured the 270 Electoral College votes needed to win.

Analysts say a Congress likely once again split between a Democratic House and a Republican Senate is expected to keep U.S. tax and other policies relatively stable amid legislative stalemates. And share prices tend to rise regardless of who is in the White House.

Taking reassurance where they can, “markets have been happy to presume that this Democratic White . . . House and Republican Senate is the ‘Goldilocks’ outcome. In other words, a ’Goldilocks Gridlock,‴ Mizuho Bank said in a commentary.

An expectation that Biden has a chance of winning also has raised hopes that U.S. foreign policies might be “more clear,” said Jackson Wong, asset management director of Amber Hill Capital. He added, “investors are cheering for that. That’s why the markets are performing well.”

But while most markets have rallied since Tuesday’s election rising coronavirus counts, job losses and recessions remain a dark backdrop for many countries.

Britain’s FTSE 100 edged up 0.1% to 5,893.80 as England began a four-week lockdown Thursday that will keep closed all shops selling items deemed to be non-essential, such as books and clothes. Scotland, Wales and Northern Ireland also have announced wide-ranging restrictions on economic activity.

The Bank of England increased its monetary stimulus by a bigger than anticipated 150 billion pounds ($195 billion) to help the economy weather the new lockdown measures. But as expected it kept its benchmark interest rate at an ultra-low 0.1%.

Thursday’s rallies followed a strong performance overnight on Wall Street, where the S&P 500 rose 2.2% for its best day in five months. The Nasdaq notched its biggest gain in more than six months as traders doubled down on technology stocks that are seemingly immune to pandemic shocks that bring more and more activity online.

Indonesia’s stock benchmark rose 3% after the government reported the country fell into recession for the first time in two decades in the past quarter. The economy, Southeast Asia’s largest, shrank at at 3.49% annual rate in July-September, though that was an improvement over the 5.3% contraction in the previous quarter.

Looking ahead, continued Republican control of the U.S. Senate may further stymie an agreement on a fresh infusion of aid for the economy following the expiration of an earlier package of stimulus measures in July. That could add to pressures on the Federal Reserve to do even more on its own to support the economy, which could send the dollar lower against the euro and other currencies.

The Fed is meeting this week and had been due to announce its latest decision on interest rate policy on Thursday. But it may hold off on determining whether and how to expand its economic support until after final election results are confirmed.