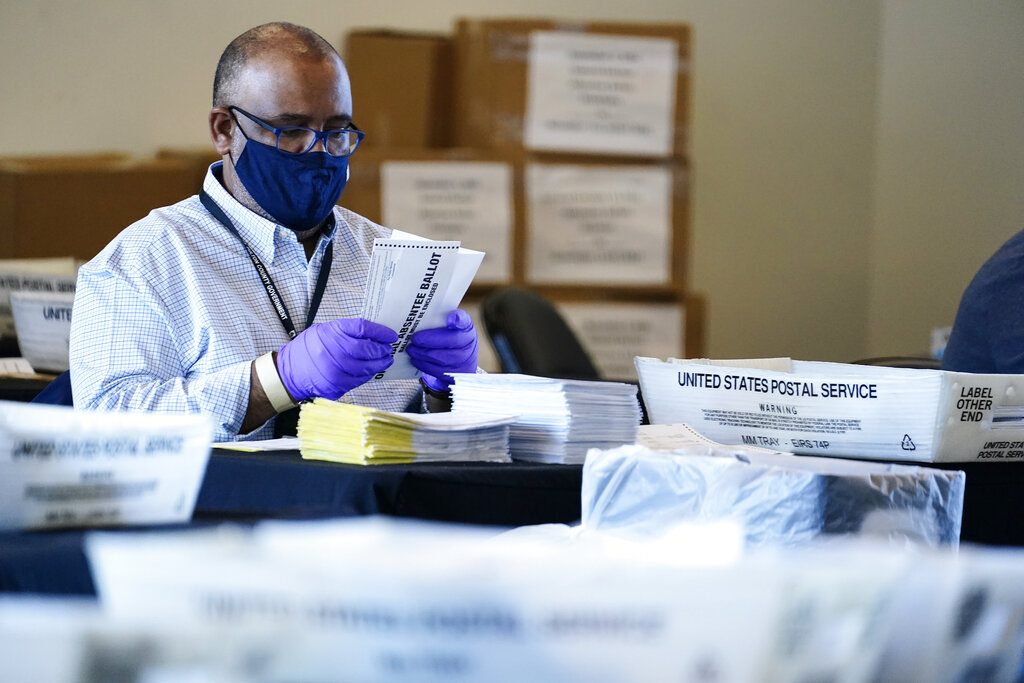 Vote counting continued in Atlanta-area counties on Thursday as Americans watched from around the nation to see whether Georgia would give Democrat Joe Biden the electoral votes he needs to become president.

The Associated Press has not declared a winner in Georgia’s presidential contest because the race between President Donald Trump and Biden is too early to call. With thousands of ballots still being tallied in counties that tend to vote blue, Democrats had reason for optimism.

By Thursday morning, the number of uncounted votes statewide was down to around “50,000 or 60,000,” Deputy Secretary of State Jordan Fuchs told The Associated Press.

“Things are getting really close,” Fuchs said. By the time all the votes are counted, “there’s a good chance that it’s literally 1,000 votes between the two of them,” she said.

By Thursday morning, election officials in the Atlanta-metro area counties of Fulton, DeKalb, Cobb and Gwinnett were scanning the remaining ballots and having adjudication panels review ballots that were flagged electronically.

These panels, including representatives from both the Democratic and Republican parties, study each ballot for marks indicating voter intent.

No Democratic presidential candidate has won Georgia since Bill Clinton was first elected in 1992, and it’s been 22 years since a Democratic nominee for governor or U.S. Senate carried the state. But some cracks in the GOP grip on power were evident two years ago when Democrat Stacey Abrams narrowly lost the gubernatorial contest to Republican Brian Kemp and refused to concede.

Shifting demographics — with more Black, Latino and Asian American voters joined by transplants from other states — and voter registration efforts have made the state more competitive. The populous suburbs in Cobb and Gwinnett Counties just north of Atlanta had already flipped for Hillary Clinton in 2016 and stayed there for Abrams in 2018.

Fulton County election workers stayed through the night feeding absentee ballots into scanners inside State Farm Arena, the home of the Atlanta Hawks NBA team. Meanwhile, adjudication panels were set to review flagged ballots several miles away in a corner of a large warehouse on Atlanta’s westside.

“All the ballots will be counted, and then we’ll have to deal with all the issues, buttoning it up,” Republican Secretary of State Brad Raffensperger, the state’s top election official, told WSB-TV early Thursday.

By late Wednesday, Raffensperger said, fewer than 108,000 votes remained to be tallied, down from an estimated 200,000 earlier in the day.

Raffensperger also said that ballots that usually aren’t counted until after Election Day such as those sent by military people and citizens living overseas will eventually be incorporated into the final totals.

In Fulton County, home to Atlanta and Georgia’s most populous county, election officials brought in a fresh shift of workers Wednesday night to count about 36,000 remaining absentee ballots. Rick Barron, the county elections supervisor, said Thursday that they worked through the night, aiming to wrap up the count and deliver any flagged ballots to the adjudication panels by 10 a.m.

Emory University political science professor Alan Abramowitz said during a video news briefing Wednesday that it may take several days before the final outcome is known in Georgia and the final margin will likely be very small.