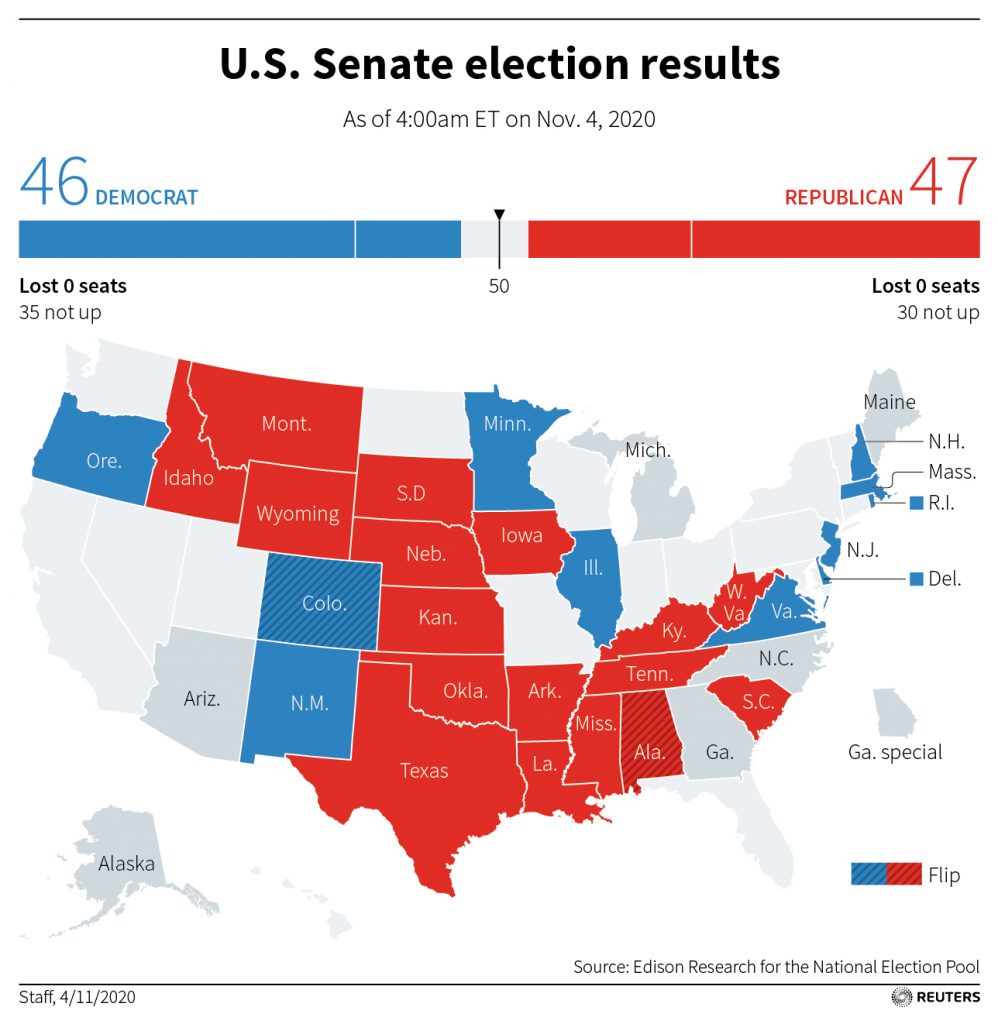 A Democratic drive to win control of the Senate appeared to fall short, with Democrats picking up only one Republican-held seat while six other races remained undecided early on Wednesday.

To win the majority in the Senate, Democrats would need to pick up three Republican seats if Democratic presidential nominee Joe Biden is elected president and Senator Kamala Harris wields the tie-breaking vote as vice president.

But the Democratic path to victory narrowed sharply as results poured in and the final outcome may not be known for days, and in some cases, months.

Republicans also held onto an open seat in Kansas, where Republican Roger Marshall was declared the winner over Democrat Barbara Bollier.

Republican Senator Susan Collins of Maine, a moderate long viewed as vulnerable to upset, led Democrat Sara Gideon by several percentage points in a race that Gideon predicted would not be called soon.

Republican Senator Thom Tillis of North Carolina declared victory over his Democratic challenger, Cal Cunningham, while leading by about 95,000 votes. But the race had not been called.

Republicans now hold a 53-47 seat Senate majority. Democrats were projected to maintain control of the 435-seat House of Representatives.

Gardner, a first-term Republican long seen as his party’s most vulnerable Senate incumbent, lost to Hickenlooper in a formerly Republican state where demographic changes have increasingly favored Democrats in recent years, according to projections by media networks and Edison Research.

Democrat Mark Kelly, a former U.S. astronaut who had long dominated the Arizona race, was declared winner while leading McSally by nearly 7 percentage points in the one-time Republican stronghold.

Jones, the most vulnerable Democrat, lost as expected to challenger Tommy Tuberville in the Republican stronghold of Alabama.

Cornyn was declared the winner against challenger M.J. Hegar in a state that had appeared to be drifting toward Democrats. Republican Senator Majority Leader Mitch McConnell won re-election in Kentucky, as expected.

First-term Republican incumbents also faced challenges in Alaska and in a second Georgia Senate race. Democrat Gary Peters was on the defensive in Michigan.

One of two Georgia Senate races was projected to go to a Jan. 5 runoff between Republican Senator Kelly Loeffler and Democrat Raphael Warnock.

Final results from a four-way Maine contest among Collins, Gideon and two independent candidates could be delayed for 10 days to two weeks if no candidate wins an outright majority and the race is forced into an automatic runoff under the state’s ranked-choice voting system, according to a state election official.

Maine voters can rank candidates in order of preference. With no clear winner on election night, the contest would enter a series of elimination rounds in which lower-ranked candidates drop out until a victor emerges.

In Michigan, where Peters could be vulnerable to an upset by Republican John James, state election officials warned final results may not be available until Friday.