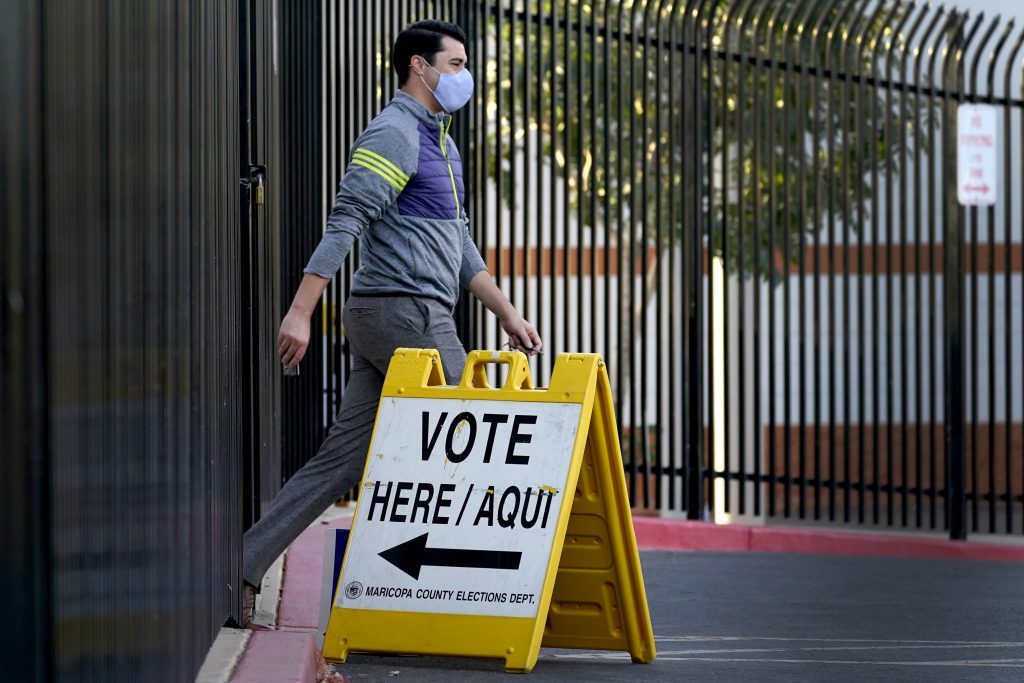 The former vice president benefited from the state’s changing demographics and successfully won over swing voters who split their tickets two years ago to elect a Republican governor and a Democrat to the Senate.

Trump and his allies made an aggressive, but ultimately futile push to hold onto Arizona, which the president won by 3.5 percentage points in 2016.

Trump, his children, Vice President Mike Pence and other campaign surrogates visited the state repeatedly during the campaign’s closing weeks.

Meanwhile, former astronaut Mark Kelly opened a wide lead Tuesday against Republican Sen. Martha McSally in his push to become Arizona’s second Democratic senator. Arizona hasn’t had two Democratic senators since Earnest McFarland lost his re-election bid in 1952. Kelly led 55% to 45%, with 70% of votes counted, including those cast through the weekend.

Kelly all but declared victory, saying, “I’m confident that when all the votes are counted, we’re going to be successful in this mission.”

His wife is former Rep. Gabrielle Giffords, who was shot in the head in 2011 in an assassination attempt in Tucson.

A Kelly win could prove crucial in determining control of the Senate. McSally was appointed to the seat formerly held by late GOP Sen. John McCain.

In 2018, Sen. Kyrsten Sinema beat McSally to become the first Democrat in Arizona to win a Senate seat in 30 years amid changing demographics.

The state was in play down the ballot, giving Democrats a realistic shot even at winning control of the state Legislature and the Arizona Corporation Commission that regulates electric utilities. Voters also approved an initiative allowing Arizona to join other states that have legalized recreational marijuana.

Arizona voters were in a negative mood as they chose their president, according to AP VoteCast, a survey of more than 132,000 voters and nonvoters nationwide conducted for The Associated Press by NORC at the University of Chicago. The survey shows that 61% of Arizona voters said the U.S. is on the wrong track, while 39% said it is headed in the right direction.

But they also were motivated. Election officials in Maricopa County, the state’s most populous, said multiple voting locations with people still in line when they were set to close at 7 p.m. remained open as required by state law.

Carla Retana, who turned 18 on Election Day, called it “amazing” to cast a ballot on her birthday.

“I registered months ago to see if I could actually vote. I made calls, and everyone was like, ‘Yes, if you registered before your birthday then, of course, you can vote,” Retana said outside a polling site.

She was with her cousin, Anthony Medina, who turned 18 four months ago. Registered independents, they both voted for Biden.

“Our current president has said so many bad things about Hispanic people, Black people, calling our current virus the ‘Chinese virus.’ I couldn’t really side with him,” Medina said.

Brandon Ross, 27, a financial adviser and Republican, said he voted for Trump as he did in 2016. He said he understands Trump’s demeanor rubs people the wrong way but said his policies on the economy and civil liberties are what matter.

“What he supports is by and large what I support,” Ross said, suggesting that coronavirus restrictions would stay minimal under Trump.

Nearly 143,000 voters had cast ballots in person as of 5 p.m., and 1.7 million early ballots had been returned and their signatures verified, said Megan Gilbertson, a spokeswoman for the county’s elections department.

Statewide, participation was already high, with nearly 62% of voters having cast their ballots either by mail or in-person by Monday morning.

Democrats pinned their hopes on Arizona’s changing demographics and swing voters who split their tickets two years ago to elect a Republican governor and send a Democrat to the U.S. Senate. Their fortunes have risen thanks to the state’s growing Latino population and influx of new voters.

Trump and his allies battled to hold on to Arizona, which the president won in 2016 by 3.5 percentage points.

Speaking early Wednesday from the White House, Trump said many votes were outstanding and “there’s a possibility, maybe even a good possibility” that he could win despite the deficit.

Bill Clinton was the most recent Democratic presidential candidate to take Arizona, winning with 46% of the vote in 1996, helped by Ross Perot’s strong third-party bid. Before that, the last time Arizona selected a Democrat for president was in 1948 with Harry Truman.

The makeup of the state’s U.S. House delegation also had been on the line Tuesday with all nine incumbents facing challenges.