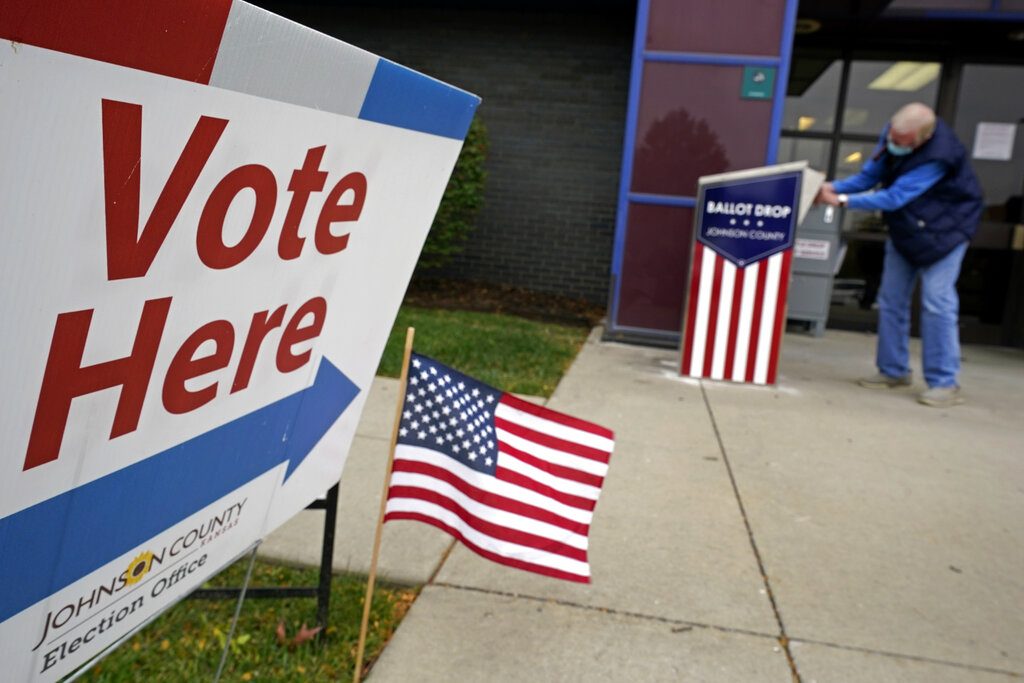 President Donald Trump and Democratic challenger Joe Biden each have a path to win the White House. The former vice president is competitive in all the battleground states Trump carried in 2016, and has put a handful of traditional Republican states, including Georgia and Arizona, in play. Trump can win by defending a wide swath of territory he won in 2016, but his hopes for reelection are heavily dependent on the swing states of Florida and Pennsylvania.

Focus on these 10 states as election returns start rolling in:

All eyes are on Florida, a swing state known for razor-thin election tallies. If President Donald Trump doesn’t win Florida, he’s going to have a rough time capturing enough states to stay in office. If Democrat Joe Biden doesn’t win the state, he still has other pathways to victory.
Don’t put the state in either candidates’ win column too early. After the polls close, Florida election officials are expected to announced the results of millions of mail-in ballots cast early. If more Democrats voted in advance, it could make it look like Biden is winning. It’s important to keep watching as ballots cast on Election Day trickle in. The remaining votes might heavily favor Trump and allow him to eke out a win just as he did in 2016. Moreover, polls close an hour later in Florida’s Panhandle, which is a Republican stronghold.

Trump won the long-running Democratic state of Pennsylvania in 2016 by a little more than 1 percentage point. Biden has had a slight advantage in most polls, while some suggest Trump remains positioned to capture the state again.
Trump’s hopes of winning boosted after Biden, in a presidential debate, called for phasing out fossil fuels. That created an opportunity for Trump in a state with a robust natural-gas industry.
Biden, who was born in Scranton, claims some favorite-son status in the state and has traveled there a lot during the campaign from his home in nearby Delaware.
Bucks County, once Philadelphia’s most GOP-heavy suburb, has been trending Democratic. Trump lost that county by less than 2 percentage points in 2016 and has seen his standing in the suburbs steadily erode since then.

Trump glided to victory in Ohio four years ago by 8 percentage points, but recent polls show this year’s presidential race tightening in the Buckeye State.
Trump’s support in key suburbs has eroded and he has worked to keep a hold of the near-historic margins he earned from voters in rural areas of the state in 2016.
As early voting began in the state, Biden expanded his ad buys into every corner of Ohio. Biden’s push into traditionally Republican areas signaled his campaign’s hope that the state could be within his grasp.
Biden also added a last minute campaign stop Monday in Cleveland, which his campaign hoped would juice turnout for him.

Population changes are driving politics in the Peach state.
Georgia, long a GOP stronghold, hasn’t voted for a Democratic presidential candidate since the 1990s, but parts of the state are leaning Democratic. Trump easily won the state by 5 percentage points in 2016, but Biden maintains he has a shot and made campaign stops in Georgia during the final week of the campaign.
The GOP grip on Georgia is loosening as the number of older, white, Republican-leaning voters pass away. They are being replaced by younger people — some having moved to fast-growing Atlanta from other states — who vote Democratic.

Michigan was long considered a Democratic stronghold in presidential contests. But Trump won it by less than 11,000 votes in 2016 with support from working-class voters and a boost from Hillary Clinton’s poor showing with Black voters in Detroit.
Biden has teamed up with former President Barack Obama to campaign in Flint and Detroit, predominantly Black cities where strong turnout will be essential to putting the state in Biden’s win column.
Trump isn’t ceding Michigan to Biden. In his campaign visits, Trump argued that he has promoted trade policies that have benefited Michigan’s auto industry, while pillorying the state’s Democratic governor over restrictions she has implemented to try to stem the spread of the coronavirus.

Arizona has a long political history of going Republican. It’s the home state of Barry Goldwater, a five-term, conservative senator who was the Republican nominee for president in 1964.
Trump won Arizona in 2016, but it is no longer an ironclad GOP stalwart.
A fast-growing Latino population — politically activated during the past decade by anti-immigrant legislation — plus explosive growth among suburbanites skeptical of Trump has energized Democrats.
In 2018, Sen. Kyrsten Sinema became the first Democrat in three decades to win an U.S. Senate seat. Democrats also won three statewide offices, five of nine congressional seats and made gains in the state legislature that year.

Trump won Wisconsin by fewer than 23,000 votes in 2016. To win it again, he needs to perform well outside urban areas like Milwaukee and Madison. His record on handling the coronavirus pandemic is at the forefront in many voters’ minds as cases of the virus spike in Wisconsin.
Biden is expected to win urban areas and recent polling suggests Trump is not doing as well as he did in 2016 in GOP-leaning suburbs around Milwaukee.
Those are key areas for successful Republican campaigns in the state. It’s unclear whether Trump can lure enough votes in the more rural areas to offset Biden strongholds in Milwaukee, Madison and Green Bay.

Trump won Iowa handily in 2016, yet the public health and economic crises resulting from the coronavirus pandemic are part of why Democrats think they have a chance.
Iowa is not a must-win for Biden. A loss for the president would significantly narrow his path to reelection.

Trump narrowly lost Nevada in 2016 as the state has trended toward the Democrats in the past decade, but the president thinks he can flip it.
Trump’s campaign has invested heavily in the state and is relying on its ground game to turn out voters. Democrats, by contrast, have largely relied on virtual campaign efforts during the pandemic, save for the casino workers’ Culinary Union, which has sent workers door-to-door.
Some Democrats fear Trump has gained momentum from increasing support from Latinos and non-college education white voters, two important constituencies in the state.