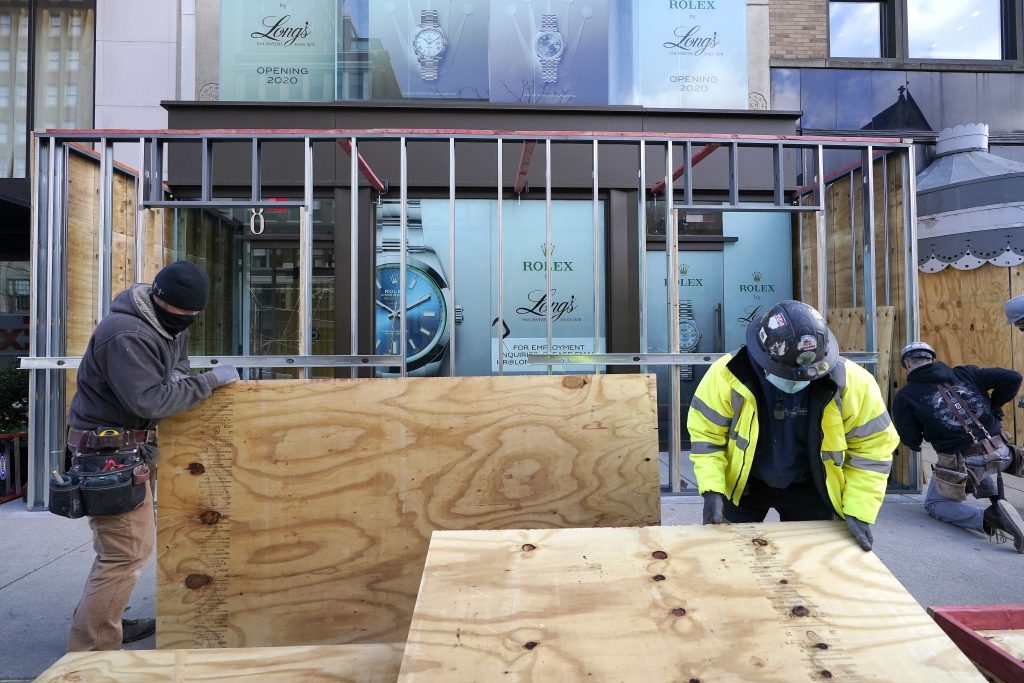 The crews arrived on Rodeo Drive at 6 a.m. Monday with a singular task: To board up every one of the roughly 70 posh boutiques and high-end properties lining the upscale Beverly Hills strip. They planned to work until midnight and barricade Rodeo Drive to vehicles and pedestrians for two days, all in anticipation of Election Day.

“Ferragamo is boarded up, Prada is boarded up, Dolce & Gabbana is boarded up,” said Kathy Gohari, vice president of the Rodeo Drive Committee. “Rodeo Drive is among the most desirable streets in the world, which means we’re one of the biggest targets. What we do not welcome is people with ill intentions, who are here to destruct property.”

After a year marked by unrest and upheaval, retailers around the country are taking sweeping measures – and spending millions – to protect their stores during a high-stakes presidential election that could quickly turn contentious. Saks Fifth Avenue and CVS are boarding up store windows and adding extra security at some locations, while Neiman Marcus is closing all stores at 5 p.m. on Election Day. Others are closing altogether on Tuesday, or providing paid time off for employees to vote or volunteer at the polls.

“The safety of our customers, associates, and communities, as well as the protection of our physical assets, is of utmost importance,” Nicole Schoenberg, a spokeswoman for Saks Fifth Avenue, said in a statement.

The election is the latest wild card for retailers, which have been hit hard by the coronavirus pandemic and a summer of civil unrest. The May 25 killing of George Floyd, a Black man, in police custody in Minneapolis sparked protests across the country, including some that turned violent. Stores across the country were vandalized, leading some retailers such as Target and Nordstrom to abruptly shutter locations, and others to board up windows and step up security.

Retailers have already sustained an estimated $1 billion in insured losses from property damage and theft this year, according to early estimates from the Insurance Information Institute, making this year’s protests “the costliest civil disorder in U.S. history.”

Commercial security companies and contractors say they’ve been fielding round-the-clock calls from business owners who are worried about protests and riots.

“All of the requests are the same: Board up everything before Election Day,” said a manager at Commercial Glass Door Repair in Washington, D.C., who spoke on the condition of anonymity because he is not authorized to speak on behalf of the company. “If you go downtown, everything is boarded up, regardless of whether it’s a luxury store or not. It’s never been like this before.”

In Chicago, a number of stores along its famed Magnificent Mile have boarded up their windows in recent days. The city has snowplows, salt trucks and other “pre-staged” vehicles ready to deploy as barriers if it needs to shut down certain areas, according to Adam Skaf, a spokesman for the Magnificent Mile Association. The group, he said, has been closely coordinating with the police to come up with “long-term security strategies” in the run-up to the election.

Retailers say recent vandalism and looting has resulted in tens of millions of dollars in losses and rebuilding expenses. Sneaker chain Foot Locker, for example, said it had incurred $18 million in costs from “recent social unrest” during the summer.

Demand for attack-resistant windows has been on the rise since the summer, particularly among small businesses and marijuana dispensaries around the country, according to Mike Clark, vice president of Creative Industries in Indianapolis.

“It’s been a mixture of responding to the riots, as well as preparing in anticipation of the election results,” he said. “Businesses are calling and saying, ‘Our windows have been smashed out. We want to upgrade to resistant material.'”