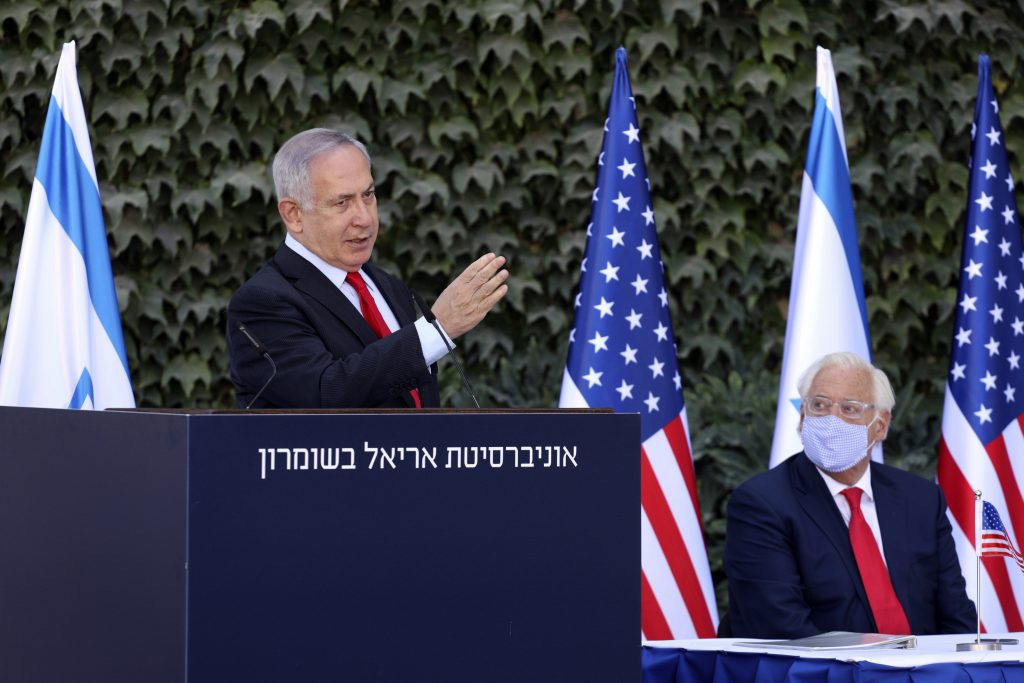 Israel’s leader on Sunday praised President Donald Trump’s Mideast policies, even as he avoided openly taking sides ahead of the U.S. presidential election.

Prime Minister Binyamin Netanyahu told reporters that U.S. bipartisan support has been “one of the foundations of the American-Israeli alliance.” He then went on to say “that alliance has never been stronger” and praised a slew of steps taken by Trump in favor of Israel.

He noted the tough U.S. stance toward Iran, recognition of Yerushalayim as Israel’s capital, recognition of Israel’s annexation of the Golan Heights, the tolerant approach toward Israeli building in Yehuda and Shomron, and the recent diplomatic pacts between Israel and three Arab countries.

Despite his stated commitment to bipartisan ties with the U.S., Israel’s closest and most important ally, Netanyahu has frequently been seen as siding with the Republicans. Netanyahu had a tense relationship with President Barack Obama, appeared to favor Republican challenger Mitt Romney in 2012 and then delivered a major speech to Congress in 2015 to argue against Obama’s emerging nuclear deal with Iran.

While Trump is popular with the Israeli public, Netanyahu’s close relationship with the president appears to be deepening a divide with American Jews. Opinion polls have indicated that American Jews will vote overwhelmingly in favor of Democratic challenger Joe Biden.

Speaking at his Yesh Atid-Telem’s weekly faction meeting in the Knesset, Lapid said: “Until a few years Israel was above politics in the United States. We were a bipartisan issue. All the governments of Israel preserved good relations with the Democrats and the Republicans.”

“Netanyahu decided, mostly for internal reasons, to break with that principle,” he said. “Netanyahu created an almost complete identification between the current Israeli government and the Republican Party, between himself and President Trump. He wanted to use President Trump’s justified popularity in Israel to gain some points at home.”

“Israel cannot afford to be a branch of the Republican Party,” Lapid warned, adding that “Israel is losing the Democratic Party.”

“Within the Democratic Party radical voices are growing stronger,” Lapid continued. “Anti-Israel actors are working hard within the party. Instead of working with the Democrats wisely and with patience, Netanyahu’s approach is playing into the hands of the radical elements. He’s pushing the Democrats further and further away.”

“Netanyahu knows all this but like always the only thing that concerns him is his personal interest, only public relations, only his relations with certain Republican billionaires,” Lapid said.