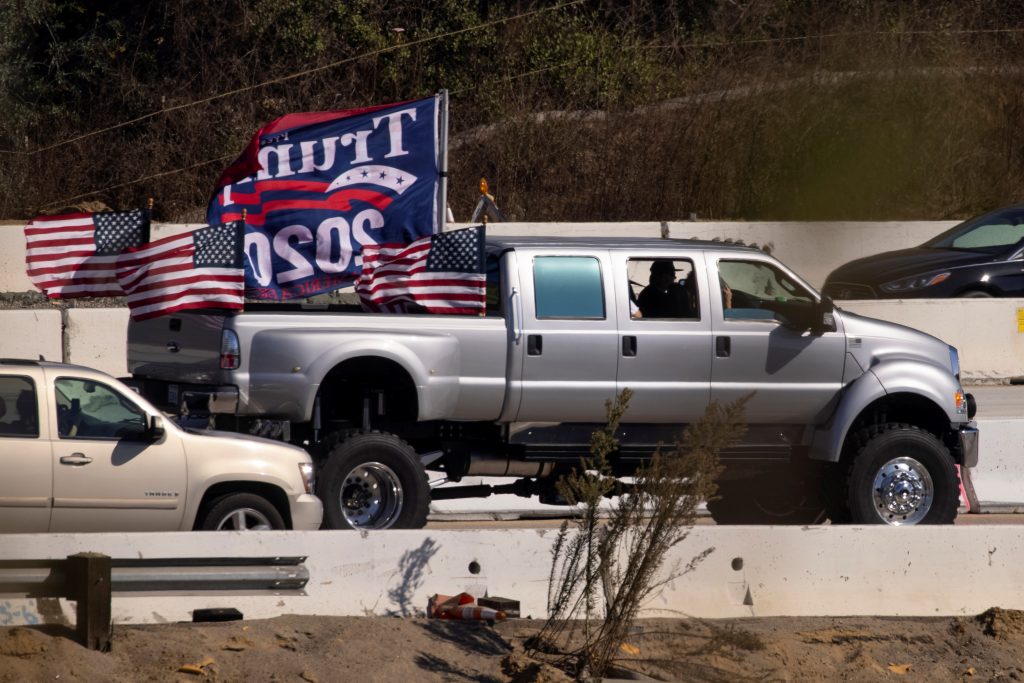 President Donald Trump will hunt for support in four battleground states on Monday while Democratic rival Joe Biden focuses on Pennsylvania and Ohio during the final day of campaigning in their long, bitter race for the White House.

The Republican Trump trails Biden in national opinion polls ahead of Tuesday’s Election Day. But the race is seen as close in enough swing states that Trump could still piece together the 270 votes needed to prevail in the state-by-state Electoral College that determines the winner.

Trump, aiming to avoid becoming the first incumbent president to lose re-election since fellow Republican George H.W. Bush in 1992, will hold rallies on Monday in North Carolina, Pennsylvania, Wisconsin and two in Michigan.

He won those states in 2016 against Democrat Hillary Clinton, but polls show Biden is threatening to recapture them for Democrats.

Trump will wrap up his campaign in Grand Rapids, Michigan, the same place he concluded his 2016 presidential run with a post-midnight rally on Election Day.

Biden, running mate Kamala Harris and their spouses will spend most of Monday in Pennsylvania, splitting up to hit all four corners of a state that has become vital to the former vice president’s hopes.

Joe Biden will rally union members and members of the African-American community in the Pittsburgh area before being joined for an evening drive-in rally in Pittsburgh.

Biden also will make a detour to bordering Ohio, spending time on his final campaign day in a state that was once considered a lock for Trump, who won it in 2016, but where polls now show a close contest.

Biden has wrapped up the campaign on the offensive, traveling almost exclusively to states that Trump won in 2016 and criticizing the president’s response to the coronavirus pandemic, which has dominated the late stages of the race.

Biden accuses Trump of giving up on fighting the pandemic, which has killed more than 230,000 Americans and cost millions of jobs. Polls show Americans trust Biden more than Trump to fight the virus.

During a frantic five-state swing on Sunday, Trump claimed he had momentum. He promised an economic revival and imminent delivery of a vaccine to fight the pandemic. Dr. Anthony Fauci, the top U.S. infectious diseases expert, has said the first doses of an effective coronavirus vaccine will likely become available to some high-risk Americans in late December or early January.

Trump again questioned the integrity of the U.S. election, saying a vote count that stretched past Election Day would be a “terrible thing” and suggesting his lawyers might get involved.

Americans have already cast nearly 60 million mail-in ballots that could take days or weeks to be counted in some states – meaning a winner might not be declared in the hours after polls close on Tuesday night.

“I don’t think it’s fair that we have to wait for a long period of time after the election,” Trump told reporters. Some states, including Pennsylvania, do not start processing mail-in votes until Election Day, slowing the process.

Trump has repeatedly said that mail-in votes are prone to fraud, although election experts say that is rare in U.S. elections. Mail voting is a long-standing feature of American elections, and about one in four ballots was cast that way in 2016.

Democrats have pushed mail-in voting as a safe way to cast a ballot in the coronavirus pandemic, while Trump and Republicans are counting on a big Election Day in-person turnout.

“We’re going in the night of – as soon as the election is over – we’re going in with our lawyers,” Trump told reporters without offering further explanation.

Trump denied an Axios report that he has told confidants he will declare victory on Tuesday night if it looks like he is ahead, even if the Electoral College outcome is unclear.

“The president’s not going to steal this election,” Biden told reporters when asked about the Axios report.

A record-setting 92.2 million early votes have been cast either in-person or by mail, according to the U.S. Elections Project, representing about 40% of eligible voters. The early surge has led Michael McDonald of the University of Florida, who administers the project, to predict a record turnout rate of about 65% of eligible voters, the highest rate since 1908.

A federal judge in Texas will consider on Monday whether Houston officials should throw out about 127,000 votes already cast at drive-through voting sites in the Democratic-leaning area. A Republican state legislator and others accuse Harris County Clerk Chris Hollins, a Democrat, of exceeding his constitutional authority by allowing drive-through voting as an alternative during the coronavirus pandemic.

Former President Barack Obama, under whom Biden served as vice president for eight years, will hold a get-out-the-vote rally in Atlanta, Georgia, on Monday before closing out the campaign in the evening with a rally in Miami.