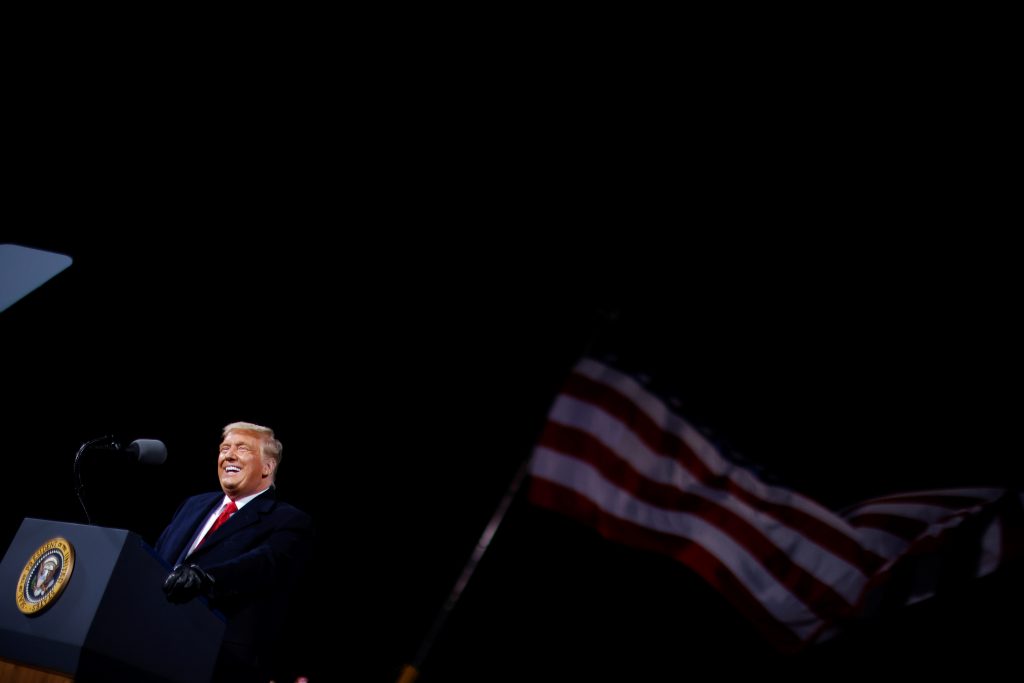 With two days to go, Democrat Joe Biden holds a commanding national lead over President Donald Trump amid deep voter concerns about the coronavirus pandemic, but Trump is keeping his hopes alive by staying competitive in the swing states that could decide the White House race.

Biden’s national lead over the Republican president has stayed relatively steady in recent months as the public health crisis has persisted. He is ahead 51% to 43% in the latest Reuters/Ipsos poll taken Oct. 27-29.

But Trump is still close to Biden in enough state battlegrounds to give him the 270 state Electoral College votes needed to win a second term. Reuters/Ipsos polls show that the race remains a toss up in Florida, North Carolina and Arizona.

Trump also trails by five points in Pennsylvania and nine points in Michigan and Wisconsin, three other battleground states that helped give him an Electoral College win in 2016 over Democrat Hillary Clinton, who won the popular vote.

But even without Michigan and Wisconsin, Trump can win again if he holds all of the other states he won in 2016.

Trump‘s deficit in the polls has been driven in part by an erosion in support from two big parts of his winning 2016 coalition, whites without a college degree and older Americans, and by public disapproval of his handling of the pandemic, which has become the dominant issue in the race.

Biden and Trump have taken starkly different approaches to managing COVID-19, which has killed more than 227,000 people in the United States and cost millions more their jobs. Trump has repeatedly diminished the threat and promised it will end soon, while Biden has vowed to prioritize more stringent efforts to contain it.

More than three-quarters of American adults say they are personally concerned about the health crisis, and almost 60% disapprove of the way Trump has responded to it, Reuters/Ipsos polls show.

Biden earns higher marks than Trump on his ability to handle the pandemic, and about 30% of Americans say their vote this year is primarily driven by their perception of who would be better at handling the crisis.

While Trump still has a slight lead over Biden on who would best manage the economy, that has become a smaller concern for many voters during the pandemic. Only 21% of likely voters said they are mostly looking for a president who is strong on the economy and job creation.

Trump has not been able to skirt blame for the economic slowdown and job losses caused by the pandemic. Nearly half of likely voters in three of the biggest state battlegrounds – Florida, Pennsylvania and North Carolina – blame continued school and business closures on “poor leadership and policy decisions from President Trump.”

Trump‘s response to the pandemic has hurt him with older Americans, who are most at risk from the virus. Polls show a 4-point Biden lead among voters who are at least 55 years old, a group Trump carried by 14 points in 2016.

Trump‘s advantage with non-college whites, another big component of his winning coalition in 2016, also has dwindled this year. The latest polls show Trump leading among non-college whites by 18 percentage points, compared to 30 points in 2016.

Biden also has been successful at cutting into Trump‘s support from college-educated white women, suburban men and independents. Reuters/Ipsos polling this month showed Biden winning white women college graduates by 27 points, while Clinton won them by 15 points in 2016. Biden also leads by 18 points among independent voters, who Trump won by 7 points in 2016.

Biden leads with suburban men by 12 points now. In March, they supported Trump by 1 point.

“Trump has never been one to try to expand his appeal in any way, and that has been true of his entire presidency and not just the campaign,” said Republican strategist Alex Conant.

“His theory was that he didn’t need to expand his base because the independents who voted for him over Hillary would also vote for him over any liberal Democrat,” he said.

That theory was harder to make a reality against Biden, who ran as a moderate in the crowded Democratic presidential primary against more liberal candidates.

More than a month ago, nearly nine of 10 Biden supporters and nine of 10 Trump supporters said they were “completely certain” they would not change their minds. The latest Reuters/Ipsos poll shows only 6% of likely voters are not currently backing a major party candidate. Four years ago, the number of similarly undecided voters was three times as high.