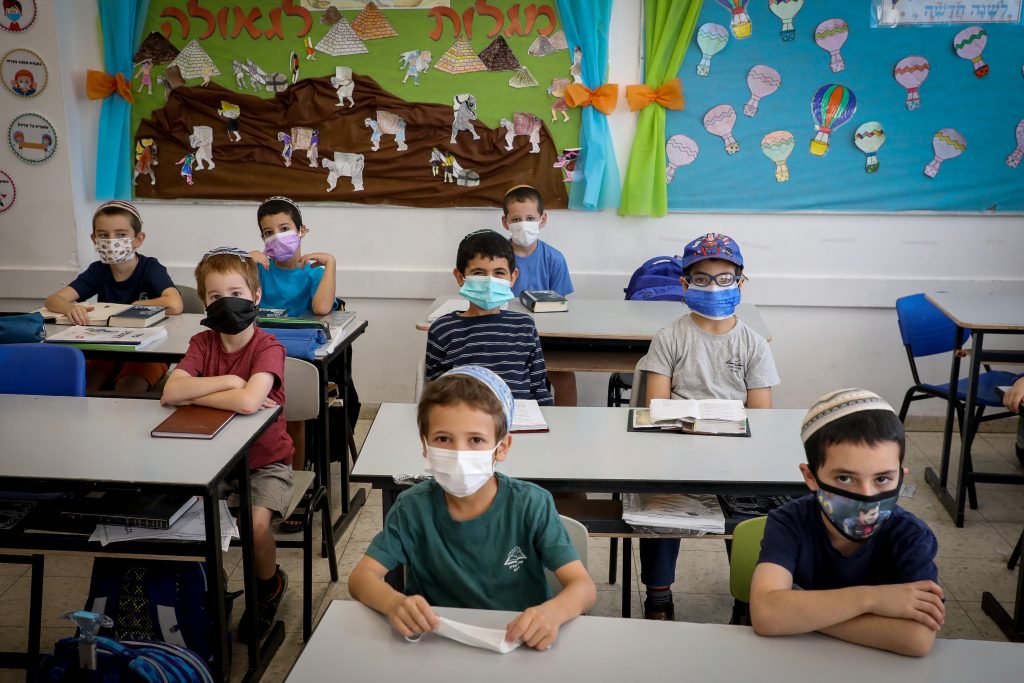 Grades 1-4 in schools across the country, shuls and bed and breakfasts reopened on Sunday morning as Israel continued to roll back some of the restrictions under a gradual exit plan from the second nationwide lockdown.

Some 500,000 children headed back to school in separated capsules of up to 18 children and will be required to wear masks throughout the day and eat their meals outdoors or spaced far apart from one another, as per a Coronavirus Cabinet decision reached on Thursday.

Children in first through fourth grade will study in school for at least four days a week, with several local authorities saying they would allocate funds to open schools for five days a week.

Education Minister Yoav Galant addressed the issue of inequality on Sunday morning, saying it was a difficult situation.

“It is impossible to ignore the fact that there are places in Israel that are able to do more by virtue of their budget. The health constraints together with the budget constraints dictate a certain situation, and we do our best,” he told the Kan broadcaster.

Those in fifth grade and above will continue remote learning.

Schools have been officially closed since September 18, when a nationwide lockdown came into force to drive down infection rates, though preschools and day cares were permitted to reopen on October 18. The latest moves — the second stage of reopening in a six-part plan — comes as Israel sees the lowest positivity rate of coronavirus tests since June.

The reopening of schools in May, after the first nationwide lockdown, and again in September, was blamed for the rise in new virus cases around the country.

In a further easing of the restrictions, bed and breakfasts were allowed to resume business starting Sunday, but only nuclear families can stay together in the vacation homes, and renters cannot use public pools or dining halls in the homes’ communities.

The ministers decided on Friday to move forward the reopening of shuls to Sunday; shuls were supposed to remain closed until November 15, according to the original plan. The number of mispallelim will be limited to ten indoors, and twenty outdoors.

The new rules came into effect at 6 a.m.

Meanwhile, street stores will remain closed at least until early next week, in a move that has outraged small business owners and merchants — many of whom have denounced the government’s handling of the crisis and say they are being victimized. Acknowledging this anger, Prime Minister Binyamin Netanyahu issued a statement Friday urging them to “cooperate for another few days” and promising further economic assistance.

The issue caused tensions on Friday during the Coronavirus Cabinet meeting that saw Finance Minister Yisrael Katz (Likud) clash with other officials, including Netanyahu, over the store reopenings.

The reopening of street stores will only go forward if infection rates are below 500 per day, according to authorities. If daily cases remain above 500, shops will only reopen on November 15, the date set in the initial reopening plan. Malls and market areas will remain shuttered for the time being.