Politics Schumer Could Win Big, or Be Relegated to Perennial Political Bridesmaid
Politics 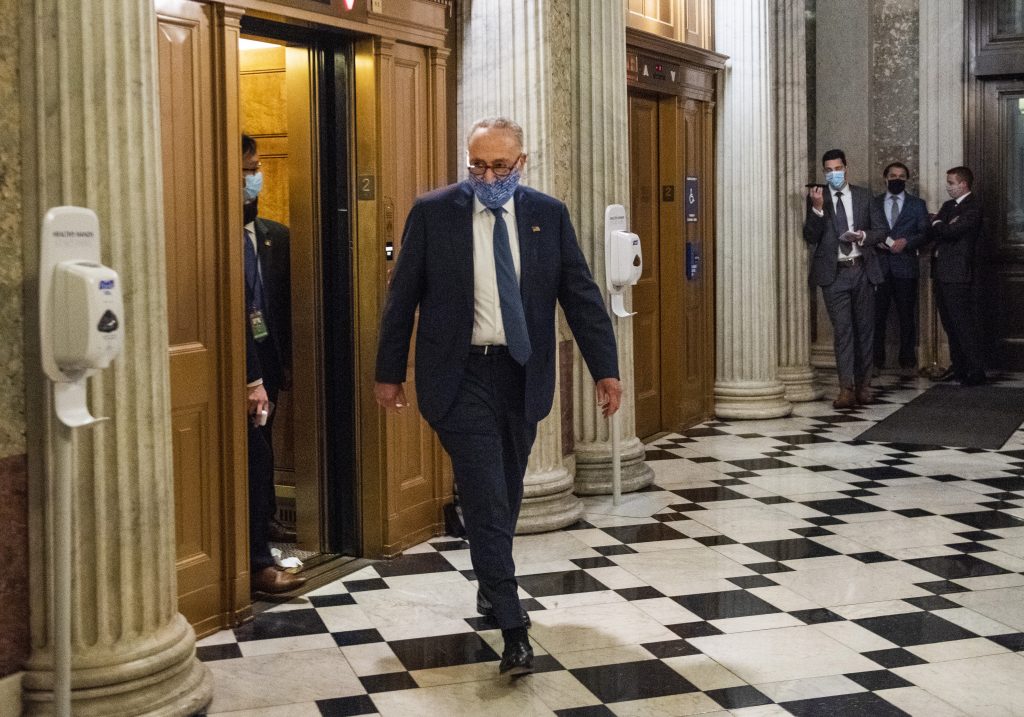 Sen. Chuck Schumer, D-N.Y., bolted from the big election-night party four years ago minutes after polls closed, declaring victory to reporters in Manhattan and then rushing for a flight back to Washington in pursuit of his dream job.

By the time he rolled into the Capitol Hill townhouse where Democratic leaders watched election results, Schumer’s dream had turned into a slow-motion nightmare. In race after race, Democrats came up short, and Schumer would be relegated to the role of Senate minority leader. Even worse, the presidential race pitting fellow New Yorkers ended with four years of insults from President Donald Trump toward “Cryin’ Chuck,” as his ally Hillary Clinton also came up short.

Now, on the eve of another presidential election, Schumer is poised to be the second-biggest winner of election night. Or, if it’s another nightmare, Schumer might be the most frustrated politician in the United States, a perennial political bridesmaid who never gets to walk down the aisle as majority leader.

A bit superstitious, Schumer has been slightly reclusive of late, by his own standards. He has avoided big speeches about how he would run the Senate, unlike Sen. Mitch McConnell, R-Ky., who spent all of 2014 describing how he would govern in the run-up to the midterms that made him majority leader for the next six years.

Schumer, who declined to speak for this column, has happily taken a back seat as House Speaker Nancy Pelosi, D-Calif., does TV appearances at a rate that Schumer used to crave.

But if Democrats hit the trifecta – a Joe Biden victory with control of the House and Senate – Schumer will become the focal point of the battle over how ambitious they need to be.

The immediate will-he-won’t-he speculation will focus on abolishing the legislative filibuster, so a more robust agenda can pass on a simple majority rather than a 60-vote supermajority needed to end debate on most bills.

And all of this will come under the intense scrutiny of his own 2022 reelection bid as Empire State liberals agitate for a primary challenge on Schumer’s left, with all eyes on young democratic socialist Rep. Alexandria Ocasio-Cortez.

Activists have distrusted Schumer since his 2005-2008 tenure as chairman of the Democratic Senatorial Campaign Committee, when he raised large dollars from Wall Street.

But longtime observers of the Brooklynite hear the sound of a senator trying to live up to the “Jewish LBJ” nickname that a former colleague gave him early last decade.

“I’m not busting my chops to become majority leader to do very little or nothing. We are going to get a whole lot done, and as I’ve said, everything, everything is on the table,” Schumer said in a recent interview.

Senate liberals see a different leader than their outside allies.

“He absolutely understands the urgency of the moment,” said Sen. Brian Schatz, D-Hawaii, part of a younger faction that wants fast action.

Schatz said that Schumer does not want to do the “normal triage,” in which a new president’s team whittles down their top 15 or so issues to just a few big items.

“We don’t have the luxury of doing only one or two things,” Schatz said.

Former advisers expect Majority Leader Schumer, if it happens, to give Republicans a chance to work in bipartisan fashion for only so long, before advising Biden, who served in the Senate for 36 years, to go it alone.

“The Senate that Chuck Schumer and Joe Biden served in is long gone. Chuck knows it; we’ll find out if Joe Biden knows it,” said Matt House, a senior adviser to Schumer from 2013 to 2018.

His team points to Schumer’s speech, shot on video in front of the Statue of Liberty, at the virtual Democratic National Convention as an example of how aggressive he wants to move. “Our country needs bold and dramatic change, and we need a Democratic Senate to achieve it,” he said in August.

In a more defiant speech Monday, just before the confirmation of Supreme Court Justice Amy Coney Barrett, Schumer dismissed any future GOP indignation about how Democrats would run the Senate.

“I want to be very clear with my Republican colleagues. You may win this vote. And Amy Coney Barrett may become the next associate justice of the Supreme Court. But you will never, never get your credibility back. And the next time the American people give Democrats a majority in this chamber, you will have forfeited the right to tell us how to run that majority,” Schumer said, staring across the aisle at McConnell.

That vote completed a four-year run in which Republicans confirmed three new Supreme Court justices while refusing to consider Barack Obama’s nominee, Merrick Garland, for the final 10 months of his presidency.

For their part, Republicans do not view Schumer as a centrist, bipartisan dealmaker. They take the long view of a partisan street fighter always looking for the edge against his opponent.

In almost every speech about the Barrett nomination, McConnell pinned the blame on a young Schumer for poisoning the Senate’s well. In early 2001, Schumer mapped out the emerging Democratic strategy to filibuster the most conservative of President George W. Bush’s nominees to the federal bench, a deep escalation of the judiciary wars.

“I hope our colleague from New York is happy with what he has built. I hope he is happy with where his ingenuity has gotten the Senate,” McConnell said Oct. 23, his back turned to Schumer and Democrats in the chamber.

In a speech the next day, McConnell seemed to signal that he expects Schumer to blow up the filibuster rules, if Democrats win the majority, but noted that Barrett would be a “permanent” fixture they could not undo.

“A lot of what we’ve done over the last four years will be undone sooner or later by the next election,” McConnell said.

But Schumer must first win the majority, and even then, the margin might matter. Trailing 53-47 now, Democrats realize a 50-50 Senate is plausible. With a Biden victory, Kamala D. Harris would be the tie-breaking vote giving Schumer the majority – but a few centrist Democrats might refuse to change the Senate rules.

They may need 52 seats in their caucus to execute what insiders call the “nuclear option” to end the legislative filibuster.

And Schumer has come up short before.

On election night 2016, Biden had planned to sneak over from the vice-presidential residence to the DSCC headquarters to join Schumer and Harry M. Reid (D-Nev.), the outgoing minority leader, to celebrate their new majority.

Biden, of course, never made that trip, and sometime after midnight, all of their dreams were dashed.

If Biden and Schumer are victorious, the incoming majority leader is challenging liberals to hold him accountable.

“We will get a lot done. Please vote. It matters this time,” Schumer said Thursday. “And then hold our feet to the fire if we don’t get anything done, but we will.”