The State Department of the United States has announced that, effective immediately, all American citizens born in Yerushalayim will be able to list their place of birth as “Jerusalem, Israel” on official documents.

For decades, due to political tensions, if an American was born in Yerushalayaim, his or her parents could only put down “Jerusalem” on passports and consular documents.

Both Israel and the Palestinian Authority claim Yerushalayim as their capital, and the status of the city is one of the greatest sources of contention in the conflict between Israelis and Palestinians.

In 2002 Congress passed a law that directed the State Department to allow “Jerusalem, Israel” on birth certificates. However, then-President George W. Bush defied Congress, claiming they had overstepped their boundaries in directing the State Department, which only the president has authority to do. President Barack Obama’s administration took Bush’s position, and in 2015 the Supreme Court ruled the law was a violation of the balance of federal powers.

The Trump Administration recognized Yerushalayim as the capital of Israel in 2017, but on the State Department’s website, it states “We are not taking a position of any final status issues, including the specific boundaries of the Israeli sovereignty in Jerusalem, or the resolution of contested borders. Those questions are up to the parties involved.” 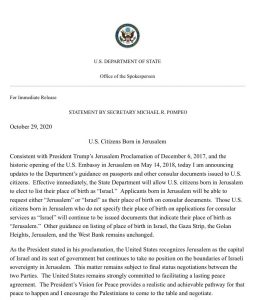