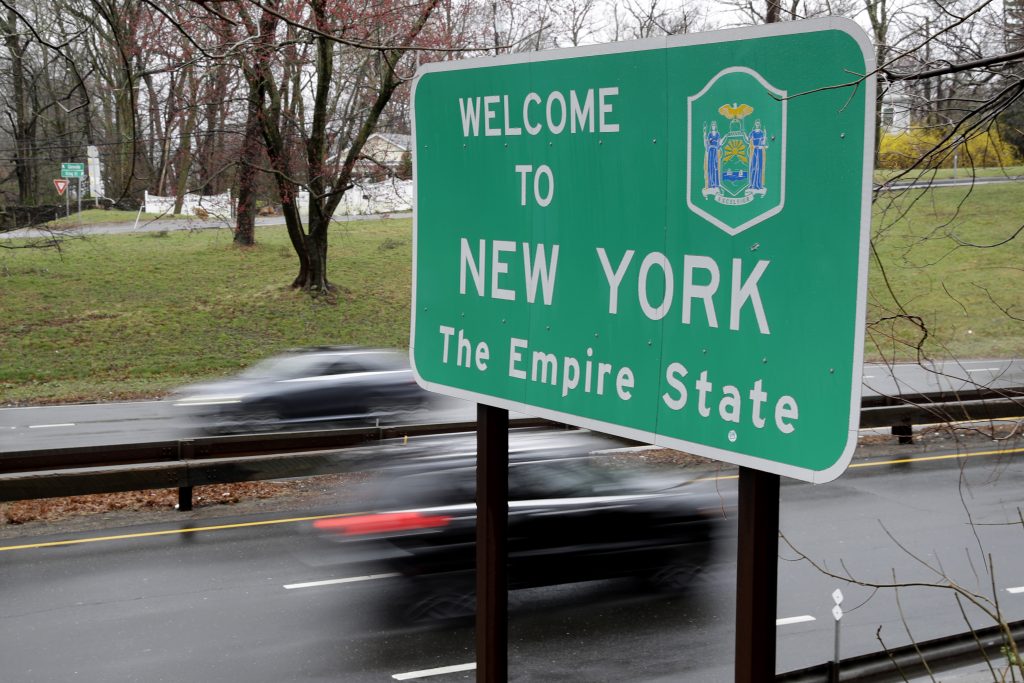 Rich Collins is trapped in the maze of coronavirus-related travel restrictions in the Northeast. The Rhode Island firefighter has custody of his 5-year-old daughter every other weekend in an agreement with his ex-wife, but he can’t bring her to his home because she lives in upstate New York.

“The problem is, if I bring my daughter to Rhode Island for her weekend here, then when she goes back to New York — due to Rhode Island being on New York’s quarantine list — she can’t go to school. She has to quarantine for 14 days,” said Collins, 36, of Warwick.

“It’s been taking its toll,” he said. “There’s no end in sight. I find it ironic that Rhode Island is the only New England state on New York’s list. It’s very frustrating.”

With coronavirus rates rising across the country, more states have qualified for the travel restrictions imposed by New York, New Jersey and Connecticut, raising questions about the usefulness of those rules. Only seven states now have rates low enough to avoid the three states’ 14-day quarantine mandate.

Connecticut and New Jersey recently qualified for their own restrictions due to rising virus rates, dealing a blow to the pride of a region that saw low virus numbers over the summer after suffering through the country’s first large outbreak.

Public health officials say the restrictions continue to help limit the spread of the virus, but enforcement has been uneven, with the three states all relying on the honor system for travelers to self-isolate and complete forms.

And the virus rate thresholds adopted by the three states are low, compared with some others used around the country and world.

“When you impose these rules and you can’t even satisfy them yourself, what it does is it shines a bright light on how ill-conceived these rules are,” said Sheldon Jacobson, a computer science professor at the University of Illinois at Urbana-Champaign who studies pandemic data. “Do you change the bar? Do you keep moving it so that you are no longer part of it? Or do you … drop it, saying, ‘This is not working’?”

Some research has shown travel restrictions are effective. In a study of several European countries and New Zealand published in July by the New England Complex Systems Institute, researchers said they reduce the chances of “undermining disease containment by importing infected cases.”

When New York, New Jersey and Connecticut implemented their travel rules in late June, New York Gov. Andrew Cuomo, a Democrat, blasted mostly Republican-led states where the virus was spiking for reopening their economies too early and playing “politics” with COVID-19.

It was a turning of the tables. In March, Cuomo had criticized President Donald Trump for wanting to quarantine tri-state-area residents due to high virus rates, saying it would be a “federal declaration of war.” New York officials also weren’t happy when Florida and Texas set quarantine rules for people coming from the three states early in the pandemic.

Under the three states’ advisories, travelers are required to quarantine for 14 days and submit forms disclosing personal information if they are arriving from states averaging 10 or more new daily cases of the coronavirus per 100,000 residents over a seven-day period, or from states where 10% or more of tests came up positive on average over the past week.

The rules don’t apply in Connecticut if someone has evidence of a recent negative test, and travelers staying less than 24 hours don’t have to quarantine.

Connecticut and New Jersey crossed the threshold of 10 new daily cases per 100,000 residents last week. But the three states have agreed to not enforce their rules against one another. Each state also has carved out exemptions for other neighboring states that qualify for the travel restrictions, citing economic and social ties and allowing workers to commute across state lines.

Enforcement of the travel rules has been lax in New Jersey, where Gov. Phil Murphy, a Democrat, has opposed fining violators, and in New York, where Cuomo has warned about fines but there has been only one known citation, in New York City. New York’s health department said it doesn’t track fines for travel violations and referred questions to 62 county health departments.

Connecticut has been stricter, issuing fines ranging from $100 to $2,000 to more than 50 people for not submitting the required travel form, most of them Connecticut residents who returned from states with high virus rates.

“You cannot physically get to every person that’s crossing borders,” said Jan Louise Jones, a professor of hospitality and tourism at the University of New Haven. “When it’s state to state, it’s essentially impossible and you just have to hope that people are still social distancing and being safe.”

Collins, the firefighter, hopes New York will exempt Rhode Island from its travel advisory soon so his daughter can come stay with him. New York is not on Rhode Island’s quarantine list, so he can visit her in New York without having to quarantine when he returns home.

“She has a loving home in Rhode Island … that she can’t come to. She’s got grandparents here that she hasn’t seen,” he said. “It’s not good for my family and I, and I don’t know what else to do.”