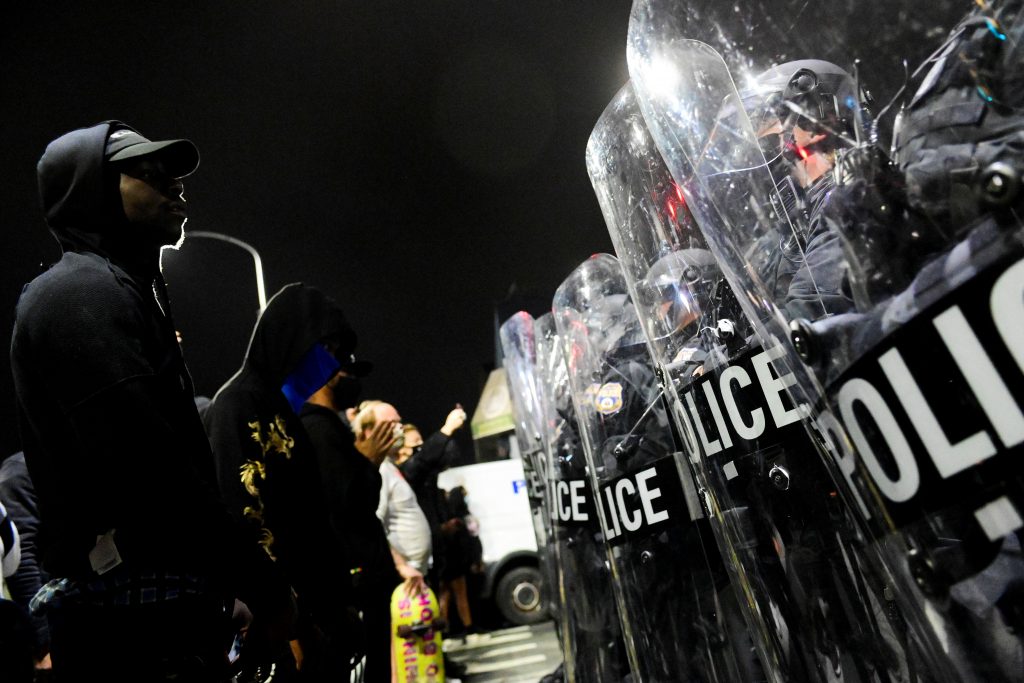 New York police arrested 32 people as approximately 200 protesters took to the streets in Fort Greene Park before marching through Downtown Brooklyn late on Tuesday following a deadly police shooting in Philadelphia of an African-American man.

At least two officers suffered minor injuries during the overnight violence in the area around Fort Greene Park. Protesters broke windows of an Urban Outfitters and Bank of America on Atlantic Avenue in Cobble Hill, and spray painted “RIP Walter,” a reference to the victim in Philadelphia.

“Approximately 30 people have been arrested,” a New York Police Department spokesman told Reuters by phone, without detailing the reason for the arrests.

Police also said that their vehicles were damaged and some trash cans were set on fire in the demonstrations.

The New York Post reported that a car attempted to drive through a group of police officials in Brooklyn, on Atlantic Avenue. It was unclear if that was part of the protests or a separate incident. Officers surrounded the car and broke its windows to try and slow it down before the driver sped away.

The development in New York City came after the deadly Philadelphia police shooting on Monday of Walter Wallace, 27, who has a knife on him and relatives said he was suffering from serious mental illness when he was confronted by law enforcement.

It follows months of anti-racism protests that have spread across the United States since the death in May of George Floyd, an African-American who died after a Minneapolis police official knelt on his neck for nearly nine minutes.

The protests, which have sometimes turned violent, have aimed at achieving racial equality and opposing police brutality.

Philadelphia became the latest flash point in the United States on issues of race and police use of force, as Tuesday’s rallies began peacefully but grew confrontational as darkness fell, just as on the previous day.

A bystander’s video of the shooting of Wallace was posted on social media on Monday and showed him approaching two police officers who had drawn their guns and warned him to put down his knife. The officers were backing up before the camera cut briefly away as gunfire erupted and Wallace collapsed.