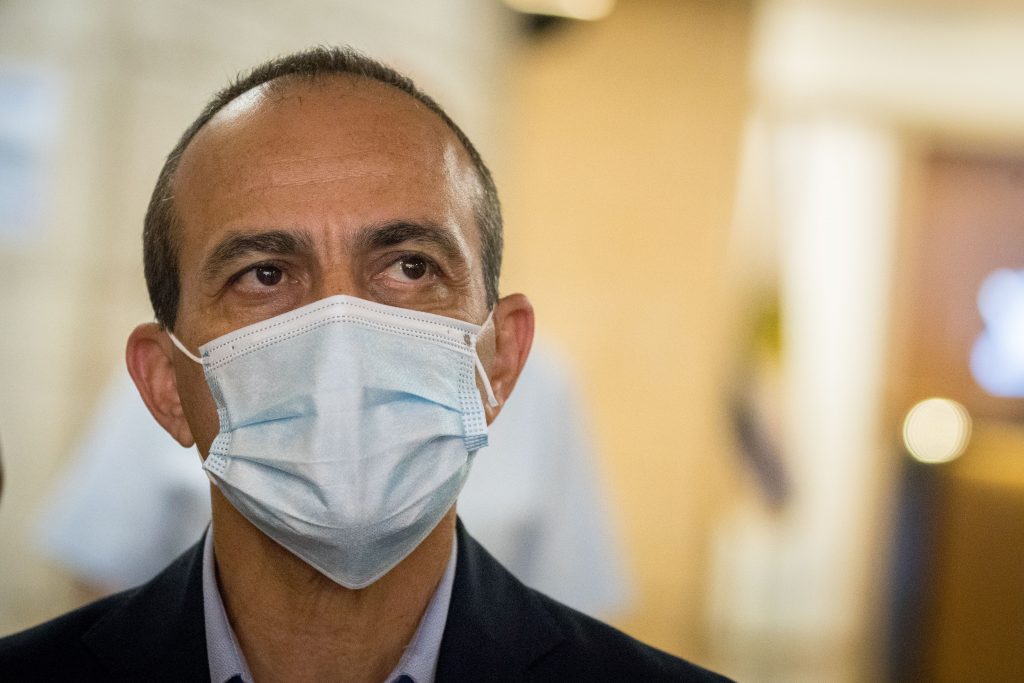 After a tumultuous three months trying to lead Israel’s response to the coronavirus crisis, Prof. Ronni Gamzu will be resigning the post.

Health Minister Yuli Edelstein announced on Tuesday that Gamzu will be succeeded by Nachman Ash, a former head of the IDF Medical Corps.

“I thank him for his willingness to take on this challenging role,” said Edelstein during a tour of the Ziv Medical Center in Tzefas.

The decision comes as the country emerges from a second nationwide lockdown. Gamzu, who entered the post with promises that he would be granted the authority necessary to carry out an effective anti-pandemic program, found himself in frequent conflict with ministers, MKs, and various health experts as he sought to implement his “traffic light” program, classifying cities and towns from red to green depending on the level of virus infection. In particular, he was sharply criticized by chareidi leaders for bias against the community.

Edelstein also talked about the lifting of the lockdown.

“Many people who were without a livelihood for weeks — and I’m talking about cosmeticians, private tutors, driving teachers and the like — will go back to work,” he said according to media reports.

“As you can see, the [infection] numbers aren’t growing as they did in the beginning,” he said. “We’re monitoring with concern and trying to exit the lockdown gradually so as to avert a third lockdown.

“On Thursday there will be another discussion around other things in the economy such as trade and B&Bs, but I suggest everyone be careful. We’ll check all the data and indices seven times before we do any more openings.”

Gamzu took on the role of head of the Magen Israel program in August after several others turned it down. He was committed to returning to his job as the head of Tel Aviv Sourasky Medical Center sometime in November.

The coronavirus commissioner praised the selection of Ash, saying that “we are in particularly challenging times, in light of the need for a safe and gradual return to the coronavirus routine.” He added that he would continue to assist as an adviser even after the end of the transition period.

Ash, 59, is a senior staff member in the Health Management Department of Ariel University. He is also the director of Maccabi Healthcare Services’ Division of Medicine.

The Health Ministry reported Tuesday evening that 836 people were diagnosed with coronavirus since the day before, out of the 40,464 people who were screened.

Some 464 patients were in serious condition Tuesday night, including 196 intubated patients. The death toll rose to 2,463.