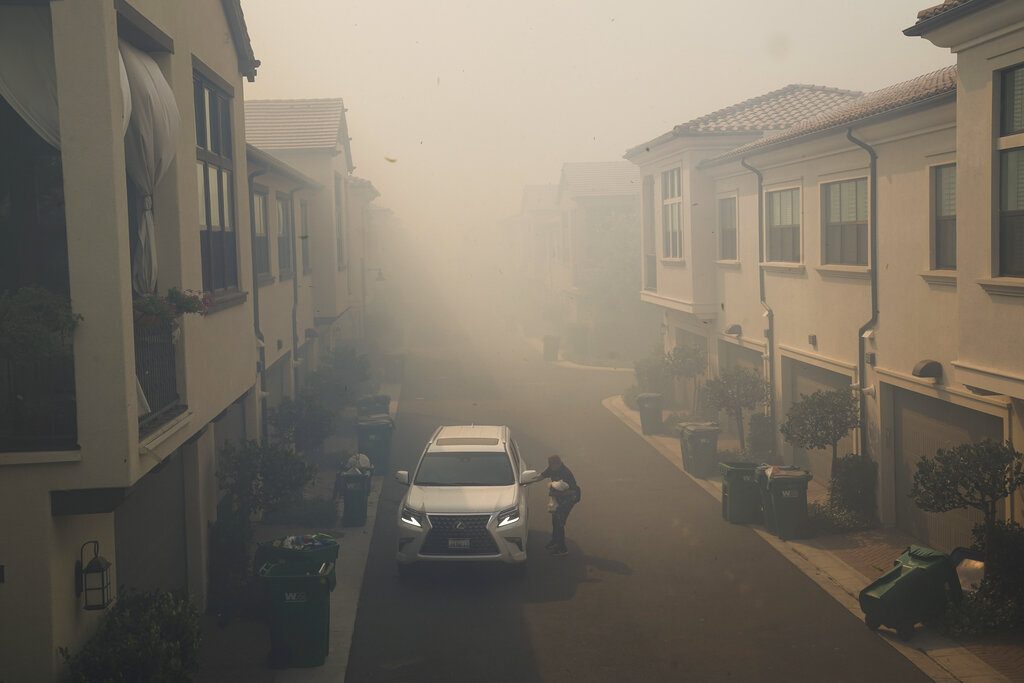 California prepared for another round of dangerous fire weather Tuesday even as crews fought a pair of fast-moving blazes in the south that critically injured two firefighters and left more than 100,000 under evacuation orders.

Some of the fiercest winds of the fire season drove fires up and down the state Sunday night and Monday before easing, but they were expected to resume overnight and continue into Tuesday morning, although not to the earlier extremes, according to the National Weather Service.

Forecasts called for Santa Ana winds up to 50 to 80 mph (80.4 to 128.7 kph) at times over much of Southern California, with some of the strongest gusts howling through Orange County, where two blazes sped through brushy hills near major urban centers.

A fire that broke out around dawn Monday prompted evacuation orders for thousands of homes in the area of Irvine, while a few miles away another blaze did the same in the Yorba Linda area. More than 100,000 people were told to flee the fast-moving flames.

One home was reported damaged.

Two firefighters, one 26 and the other 31 years old, were critically injured while battling the larger blaze near Irvine, according to the county’s Fire Authority, which didn’t provide details on how the injuries occurred. They each suffered second- and third-degree burns over large portions of their bodies and were intubated at a hospital, officials said.

Southern California Edison reported to the state’s Public Utilities Commission that it was investigating whether its equipment might have sparked the blaze. The utility said a wire that lashed a telecommunications line to a supporting cable may have struck a 12,000-volt SCE conducting line above it.

SCE was among utilities that cut power to customers to prevent equipment from being knocked down or fouled by debris in the winds and sparking wildfires.

SCE cut power to about 38,000 homes and businesses, although it restored some power by Monday night.

The winds were so strong that firefighters had to ground their aircraft for much of the day in Irvine, though they got back up by late Monday afternoon and continued their work into the night.

In Northern California, the easing of winds allowed Pacific Gas & Electric to begin restoring power after the largest of five safety shutoffs this year.

At its peak, PG&E blacked out about 345,000 customers — an estimated 1 million people — in 34 counties. PG&E said it had restored power to more than 150,000 customers by Monday evening with electricity to be back on at the other homes and buildings by Tuesday night after crews conduct air and ground inspections to make repairs and ensure it’s safe.

A dozen reports of damage had been received, PG&E said.

Nearly two dozen wildfires were reported in Northern California Sunday night and Monday but all were rapidly contained without serious damage.

However, the fire threat was far from over in many parts of PG&E’s vast service area. A red-flag warning of extreme fire danger was in effect into Tuesday morning in the Santa Cruz Mountains and some coastal and valley areas, with warnings extending into Tuesday evening for some higher elevations in the San Francisco Bay Area.