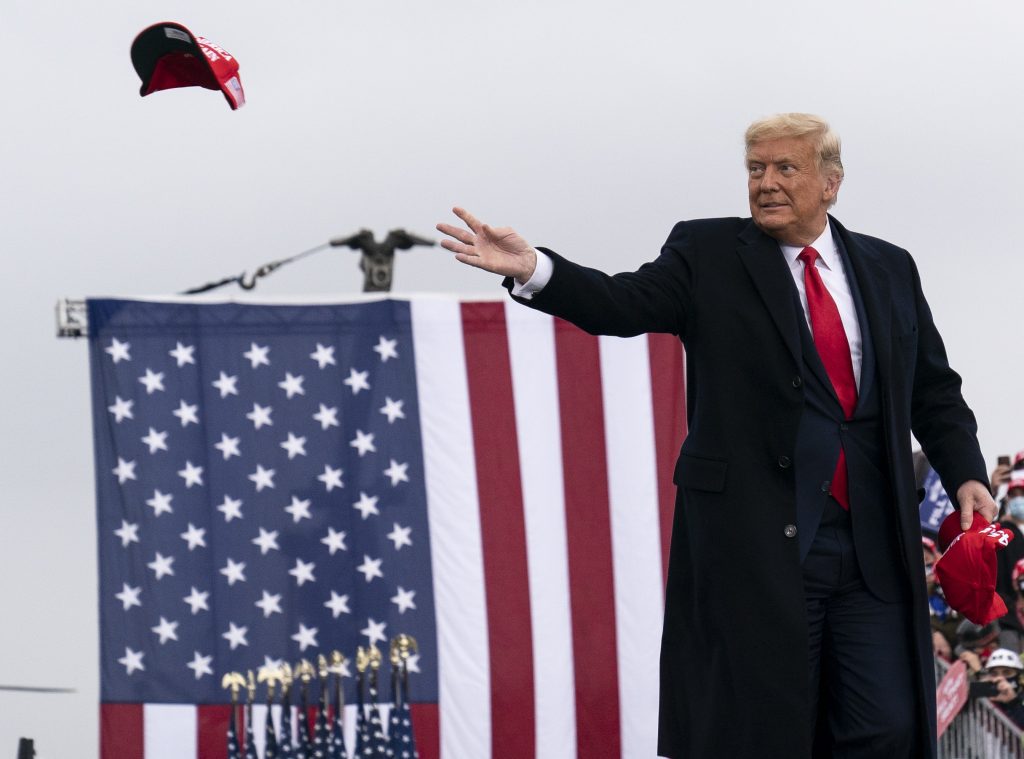 President Donald Trump and Democratic rival Joe Biden zeroed in on the critical battleground of Pennsylvania on Monday, demonstrating starkly different approaches to rallying voters just eight days before polls close during the worst public health crisis in a century.

Trump drew thousands of largely mask-less supporters as he began a final-week charge through nearly a dozen states ahead of the election. Biden, taking a more cautious approach in effort to show that he’s taking the pandemic seriously, greeted a few dozen supporters outside a Chester, Pennsylvania, campaign field office.

“Bottom line is Donald Trump is the worst possible person to lead us through this pandemic,” Biden said as he sharpened his closing message into an indictment of Trump’s handling of the virus. Trump, meanwhile, stoked fears about Biden’s plans to address the outbreak.

“It’s a choice between a Trump boom or a Biden lockdown,” Trump claimed at a rally in Allentown, focusing on the economy and the possibility of lost jobs.

For each candidate, the differing campaign approaches carry risks.

For Trump, the full-speed-ahead strategy could spread the virus in places that are already setting new records and leave him appearing aloof to the consequences. And if Biden comes up short in the election, his lower-key travel schedule will surely come under scrutiny as a missed opportunity.

Trump’s campaign schedule suggested he’s on the defensive in Pennsylvania, viewed by his aides as critical to his path to 270 electoral votes. Biden, meanwhile, is demonstrating more confidence with signals that he’s hoping to expand his campaign map.

In the closing days Biden plans to visit Georgia, a state that hasn’t voted for a Democratic presidential candidate since 1992, and Iowa, which Trump carried by more than 9 percentage points in 2016. He’s dispatching his running mate, Kamala Harris, later this week to Texas, which hasn’t backed a Democrat for the White House since Jimmy Carter in 1976.

With more than a third of the expected ballots in the election already cast, it could become increasingly challenging for Trump and Biden to reshape the contours of the race. But both men are fighting for any endgame advantage. Biden is leading Trump in most national polls and has an advantage, though narrower, in many key battlegrounds.

Several close aides to Vice President Mike Pence tested positive, including his chief of staff, Marc Short. Pence, though, was insistent on maintaining his aggressive political calendar, even though he was deemed a “close contact,” claiming the status of an “essential employee.”

Pence arrived at a rally in Hibbing, Minnesota, wearing a mask Monday but removed it as he reached the podium to speak to a crowd of supporters who were largely not wearing face coverings or social distancing.

Anticipating a razor-thin Electoral College margin, Trump has an aggressive schedule including a visit Omaha, Nebraska, Tuesday after a Sunday visit to Maine, aiming to lock up one electoral vote in each of the states that award them by congressional district. Trump is scheduled hold a dizzying 11 rallies in the final 48 hours before polls close.

Biden is sitting on more campaign cash than Trump and is putting it to use, blanketing airwaves with a nearly 2-to-1 advantage over the final two weeks. The incessant campaign ads feature both upbeat messages and blistering criticism of Trump’s handling of the pandemic.

Democrats have been heartened by their lead in the record numbers of early votes that have been cast across a number of battleground states — though they caution that Republicans are more likely to turn out on Election Day and certain to make up ground.

Four years ago, Clinton also enjoyed a lead in national and some state polls, and Democrats say their complacency doomed their candidate.