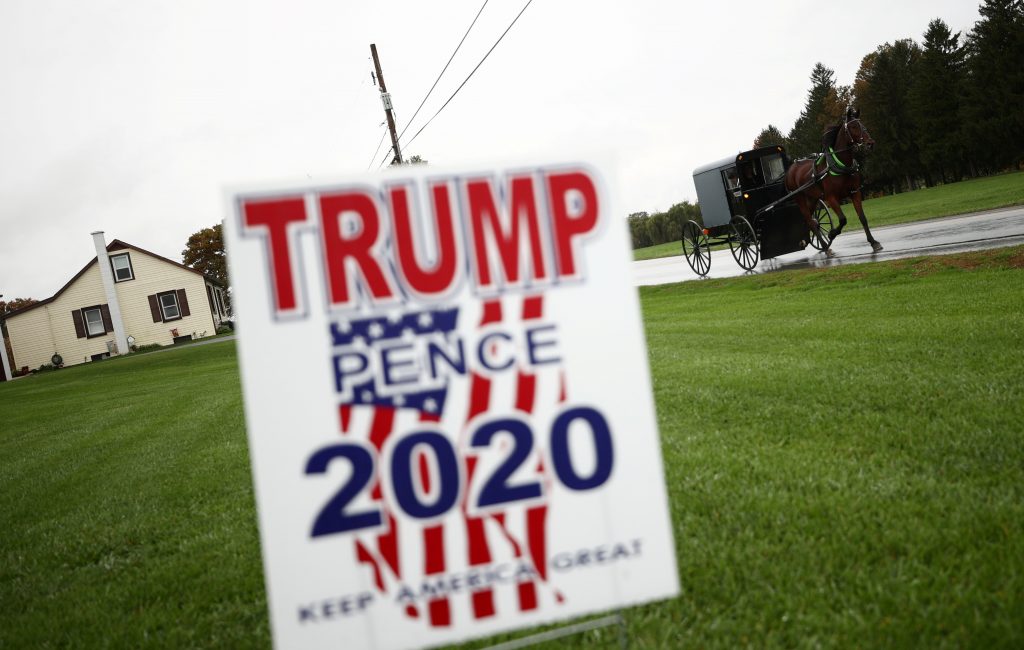 President Donald Trump and Democratic challenger Joe Biden on Monday are down to the final full week of campaigning before the Nov. 3 election, as surging coronavirus cases and a COVID-19 outbreak within Vice President Mike Pence’s staff keep the focus of the race on the pandemic.

Trump claimed progress in combating the disease even as the United States set records in recent days for daily infections, while Pence forged ahead with campaigning on Sunday despite close aides testing positive.

Biden accused the president of surrendering to the pandemic that has killed about 225,000 people in the United States.

With eight days to go before Election Day, more than 59.1 million Americans have already voted in person or by mail, a pace of early voting that could lead to the highest turnout rate in more than a century, according to data from the U.S. Elections Project at the University of Florida.

On Monday, Trump will head to Pennsylvania, a critical swing state being heavily courted with frequent visits by both candidates, and speak at rallies in Allentown, Lititz and Martinsburg. He is set for multiple trips to Michigan, Pennsylvania and Wisconsin this week, as well as visits to Nebraska, Arizona and Nevada.

Biden was expected to remain in his home state of Delaware on Monday. He is scheduled to travel to Georgia on Tuesday, with stops in Atlanta and Warm Springs, a town of about 400 people where Democratic President Franklin D. Roosevelt, who took office during the Great Depression and rolled out his New Deal recovery program, died in 1945.

That push in the southern state, which went for Trump in 2016 by about 5 percentage points and has not backed a Democratic presidential candidate since 1992, shows Biden’s effort to expand his party’s reach as polls show a competitive race in the state.

Despite Biden’s solid lead in national opinion polls, the contest in the most critical battleground states such as Florida and Pennsylvania that could decide the outcome appears closer. Biden will be aided with an appearance in Orlando, Florida, on Tuesday by former President Barack Obama, under whom he served as vice president.

The United States has seen its highest number of new COVID-19 cases in the past two days, offering Biden’s campaign a chance to remind voters of how Trump and his allies have downplayed the advice of public health experts to wear masks and observe social-distancing guidelines to combat COVID-19 transmission.

“There’s no nation in the world that’s recovered like we’ve recovered,” Trump told cheering supporters in New Hampshire on Sunday.

Pence’s chief of staff, Marc Short, tested positive on Saturday as well as multiple other senior aides. Despite the outbreak, the White House said the vice president would press ahead with campaigning. Pence, who tested negative, according to a spokesman late on Saturday, visited North Carolina on Sunday and will be in Minnesota on Monday.

The outbreak among the vice president’s staff marked the latest White House COVID-19 cases, which have included Trump, first lady Melania Trump, their son, Barron, and numerous aides and associates.