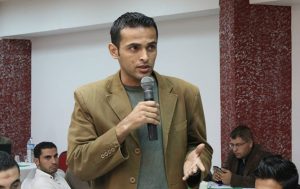 Gaza’s Islamist rulers Hamas convicted three Palestinian peace activists of “weakening revolutionary spirit” for having held a Zoom call with Israelis peace campaigners, but ordered the release of two of them after six months in jail.

Hamas arrested Rami Aman, 39, and seven other activists in April after the conference call, describing it as “treason”.

Such grassroots dialogue between Israelis and Gaza Palestinians is rare.

While five of the prisoners were released within days of being arrested, Gaza military prosecutors charged Aman and two others with aiding Israel and ordered them jailed until their trial. One of the three was granted bail in July.

A Hamas-run military court on Monday convicted all three of “weakening revolutionary spirit” but ordered authorities to release Aman and the other campaigner who had remained in jail.

Speaking to Reuters soon after his release, Aman said he had told the court he was not calling for a normalization of ties with Israel.

“I call for a just and comprehensive peace, and believe that as long as there is occupation, there will be resistance,” Aman said, referring to Israel’s occupation of the West Bank and blockade of Gaza.

Hamas did not immediately respond to a request for comment.

The military court handed Aman a one-year suspended sentence and ordered the other prisoner, whose name has not been made public, to be released on the basis of time served, the Palestinian Center for Human Rights, which had defended them, said in a statement.

Hamas seized control of Gaza in 2007 and has since fought three wars with Israel. Flare-ups along the shared border are relatively frequent.