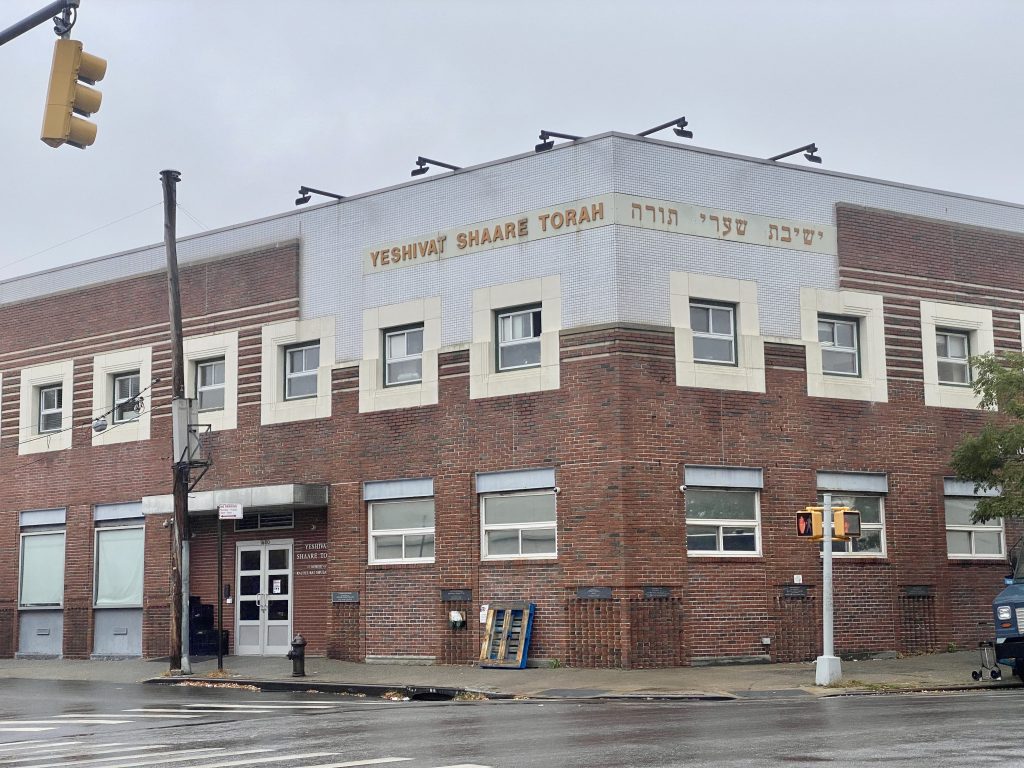 A Midwood yeshivah administrator says his school was nearly given a summons Monday despite being closed, in an encounter that was videoed and circulated widely on social media.

Yeshivat Shaare Torah boys’ elementary school, on Coney Island Ave. near Ave. N, was closed Monday, as it is in a COVID-19 “red zone,” where schools may not be open. There were just several staff members on site doing administrative work, when a school administrator says he saw two Health Department inspectors writing a summons outside. The administrator asked them to come in and see that the school was in fact closed.

A video of the encounter taken by the administrator and posted to social media, begins once the two inspectors are inside the building. A female inspector says, “This is confusing.”

“It doesn’t sound confusing to me,” the administrator replies. “It sounds that you’re just looking to give summonses. Because there’s no one in this building. You were here last week; there was no one here. Yet you were just writing up a summons outside.”

The administrator and the female inspector go upstairs, while the male remains downstairs. The woman looks around and says, “It looks good from here. Obviously, there’s nobody here.”

Throughout the encounter, the inspector appears perplexed as to what to do, as she sees there are no students in the school.

Administrator: “So why are you writing me a summons?”

Administrator “I have to record you because you were giving me a summons outside. How can I not record you? If I wouldn’t have opened the door, you would have put a summons on my door.”

Administrator: “- you have a list of schools that are open?”

Administrator: “So you have summons that you are writing before you’re even coming into the school. Because you just came into the school; there’s not one kid here.”

Female Inspector: “See, this is the thing, which you guys are not understanding. Three weeks ago, orders went out, stating that whatever schools [are] open must close, because this is a red- and orange-zone area. So we revisit these schools. If we find that these schools are open, summonses go out.”

Administrator: “But why were you writing a summons outside, though – there’s nobody in here?”

The woman then turns to the male inspector, who was on the phone, presumably with a boss, and asks what the person on the phone had said. The man replied, “She wants to know why they are open.”

The administrator then says, “It seems like you guys have a list that you’re just coming around giving summonses to, whether we’re open or closed.”

The female inspector asks the male inspector to tell the woman on the phone “that this gentleman is recording me,” and the administrator again replies, “Yes, the whole conversation is being recorded.”

The administrator replies, “You don’t have to verify anything. You can give me the summons now and I’ll show this in court. We’ll have a field day. How’s that? … You guys came in here to give me a summons without even checking the facts, and then I’m wrong for recording?”

The administrator goes on to say, “I know you guys are just doing your job, but something doesn’t make sense. Had you knocked here and asked me to come in, I would have gladly shown you around.”

The male inspector then says, apparently referring to the boss on the phone with the female inspector, “Alright, we’re going to find out what she wants to do.”

The administrator asks,”How do you explain writing up a summons without even coming in?”

Meanwhile, the female inspector says into the phone, “No, actually, it’s pretty empty,” and that the only people present were “maybe two staff members in the office and then the gentleman that’s in charge. That’s it.”

She then hangs up the phone, and says to the administrator, “You’re good.” The administrator asks, “Can I see that you’re ripping up that summons?” And she replies, “No, you can not.”

The full video portion of the encounter is multiple clips pasted together, totaling 5 minutes and 45 seconds.

After video of the incident was publicized, Councilman Kalman Yeger tweeted, “This terror being inflicted on law-abiding New Yorkers by City Hall has sadly become standard. Here is a CLOSED school about to receive a summons. Fortunately, the Quota Agents were caught by school management. @NYCMayor de Blasio, this must stop NOW!!!”

Councilman Chaim Deutsch tweeted, “In the words of the inspector: they have a list of schools to issue summonses. They made ZERO attempt to confirm if the school was closed before writing the summons. (It WAS closed) This keeps happening – it’s not an isolated incident. Orthodox Jews continue to be targeted in NY.” Deutsch then wrote, “This should serve as a reminder of how important it is to respectfully but vigilantly record any interactions with inspectors. It is easier for us (@KalmanYeger, @SEichenstein, @NYSenatorFelder, and I) to fight these summonses when there is video evidence showing the misconduct.”

In response to Hamodia’s request for comment on the incident, a City Hall spokesperson said that city inspectors are working to promote compliance with mandated closures and other requirements, including in schools. The spokesperson also said that the inspector checked the school building to determine whether there were children present and, finding none, did not issue a summons.

Since the shutdown in COVID-19 hotspots in parts of New York City were announced in the first week of October, there have been several incidents in which summonses were erroneously given before being rescinded.

Last week, a kosher café in Homecrest received a summons from a City Department of Consumer Affairs inspector simply for having his doors open to customers picking up takeout food. The previous week, two Queens yeshivos were cited by City Health Department inspectors for being open despite being in a yellow zone, in which schools are allowed to operate; and the State Health Department cited a Boro Park building-supply store, which is in fact an essential business and allowed to be open. All were subsequently rescinded.