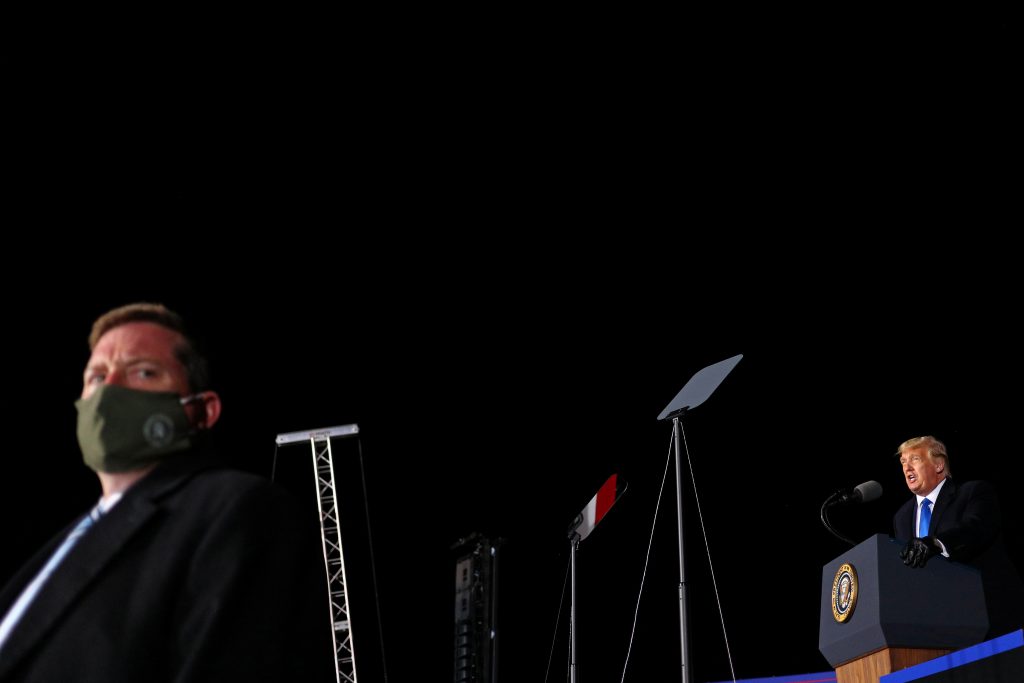 President Donald Trump will go on the offensive against Democratic rival Joe Biden on Sunday with a campaign trip to New Hampshire, a state he narrowly lost in 2016 but is trying to reclaim in this year’s White House race.

With nine days left until the Nov. 3 elections, the Republican president is storming his way through top battleground states in a late push to make up ground against Biden, who leads in national opinion polls.

Opinion polls in many of the most vital swing states that will decide the election show a closer race. New Hampshire, which Trump lost to Democrat Hillary Clinton by about 3,000 votes in 2016, has not been considered a top-tier battleground, and most polls show Biden with a comfortable edge in the New England state.

But Trump is running out of time and opportunities to change minds and shift the race in his favor. More than 56.5 million Americans have already voted in person or by mail, a pace of early voting that could lead to the highest voter turnout rate in more than a century, according to data from the U.S. Elections Project.

After voting early in his home state of Florida on Saturday, Trump raced through rallies in three states – North Carolina, Ohio and Wisconsin – where he promised the end of the coronavirus pandemic was in sight and said Biden would threaten jobs by pushing for more COVID-19 restrictions.

In Ohio, Trump said his campaign was doing well and he was not worried about the public opinion polls. “We have 10 days, and nothing worries me,” he said.

On his visit to New Hampshire, Trump will hold a rally in Manchester. He has suggested he might hold five rallies a day down the final stretch before the election.

Biden, who made two campaign stops in Pennsylvania on Saturday, has no public schedule for Sunday, although the former vice president often makes a trip to church.

During his swing through Pennsylvania, Biden renewed his criticism of Trump for not taking the health crisis seriously enough and warned of a resurgence during the winter months of the virus, which has killed more than 224,000 Americans and is on the rise in several battleground states.

“It’s going to be a dark winter ahead unless we change our ways,” he said of Trump‘s attempts to contain the coronavirus.

The United States set a single-day record of more than 84,000 new COVID-19 cases on Friday, according to a Reuters tally, with the spike in infections hitting election swing states Ohio, Michigan, North Carolina, Pennsylvania and Wisconsin.

Late on Saturday a spokesman for Vice President Mike Pence disclosed that Marc Short, Pence’s chief of staff, had tested positive for the new coronavirus. Pence and his wife tested negative earlier in the day and the vice president will not alter his schedule, the spokesman said.

Concern about the health risks of voting in crowded polling places on Election Day has helped drive the stampede to vote, as many states have increased early voting and vote-by-mail opportunities.