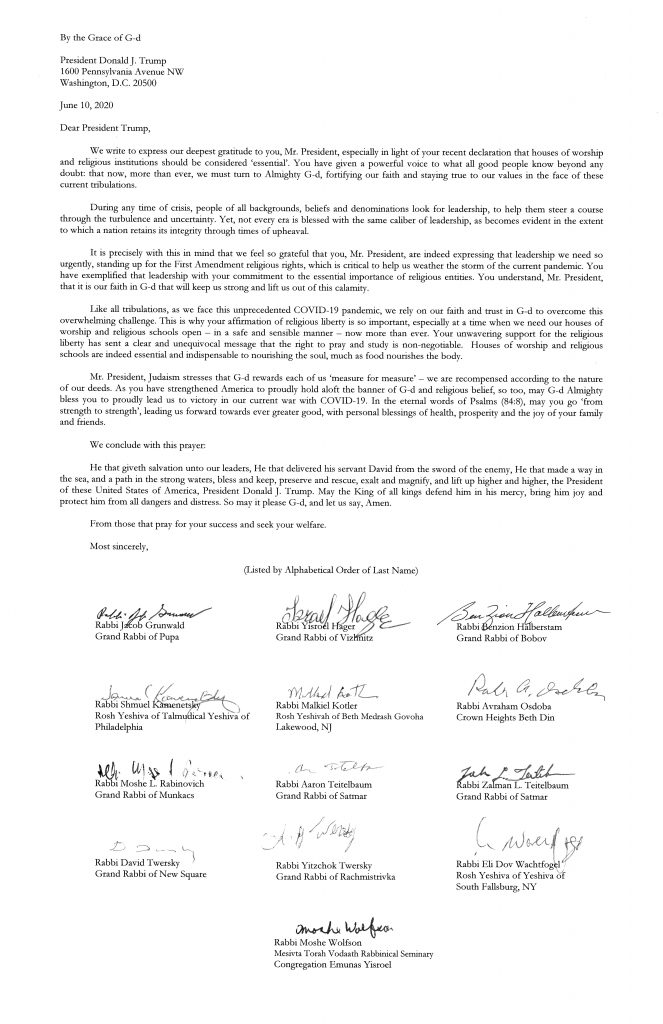 Last Motzoei Shabbos, news broke of a letter signed by 13 rabbanim, thanking President Donald Trump for declaring in May that houses of worship be considered “essential” institutions and allowed to remain open during the COVID-19 shutdown.

“You have given a powerful voice to what all good people know beyond any doubt: that now, more than ever, we must turn to Alm-ghty G-d, fortifying our faith and staying true to our values in the face of these current tribulations,” the letter stated. “We feel so grateful that you, Mr. President, are indeed expressing that leadership we need so urgently, standing up for the First Amendment religious rights, which is critical to help us weather the storm of the current pandemic.”

News of the letter, whose signatories included several rabbanim who generally don’t sign letters, spread quickly, both in Jewish and secular media. The timing of the publicization of the letter — which was in fact dated June 10 and delivered to the president in August — led many outlets to report on it as a public endorsement of the Trump campaign shortly before Election Day.

The letter was in fact intended solely as an expression of appreciation to the president for his support of religious liberties, according to Rabbi Moshe Margaretten, a prominent community activist who lives in Williamsburg, and who spearheaded and drafted the letter. In an interview with Hamodia on Tuesday, Margaretten described the story behind the historic, months-long effort, which included scheduling in-person meetings with busy gedolim, and travelling through multiple states and safeguarding the precious piece of paper on which the gedolim hand-signed the letter to be delivered to the president.

As the COVID pandemic swept through the United States in the spring, states began instituting shutdowns, which included closing schools, banning prayer services at houses of worship, and leaving open only “essential businesses.”

Some communities of faith found the notion that houses of worship were considered “unessential” to be objectionable.

On May 22, Trump, whose administration has been supportive of religious liberties, lent public support to religious advocates, decrying how some governors have deemed entities like liquor stores essential, “but have left out churches and other houses of worship.”

“It’s not right, so I’m correcting this injustice and calling houses of worship ‘essential,’” the president said. “The governors need to do the right thing and allow these very important essential places of faith to open right now.”

Though the actual decisions on shutdowns were up to the states, the president’s statement provided a moral boost to religious communities.

“Rabbanim and askanim felt that New York politicians don’t understand our community, and how essential shuls are to our lives,” Margaretten recalls. “When the president made this declaration, it was so heartwarming to all people of faith.”

Soon thereafter, a gadol suggested to Margaretten that he draft a letter to be signed by rabbanim, thanking the president for this pronouncement, and for his longstanding support of religious rights.

Margaretten, President of the Tzedek Association, had gained fame as a leading supporter of prison reform, but the gadol felt that, with his connections to the White House and experience in obtaining support from gedolim, Margaretten would be the right person for this task.

It would not be an easy one.

Margaretten began drafting the letter at the end of May. It would need careful language specifically thanking Trump for his support for religious liberties, and not be seen as an attack on any other elected officials.

The final draft was completed on June 10 — the date that would appear on the top of the letter. Then Margaretten began the process of obtaining the signatures.

After all discussions and emails negotiating drafts had been completed, a single copy was printed out for all the rabbanim to sign. This precious sheet of paper would be carried around in a special binder and carefully safeguarded, as Margaretten and others would have to visit each rav personally to obtain their signature.

“Gedolim are very busy; sometimes it took weeks to get on someone’s schedule. And we did not want to have someone fax in a signature — we wanted to present to the president a paper with actual handwritten signatures. It took lots of time to get onto the schedule of so many gedolim.

“And even once we could get on the schedule, we had to travel to wherever they were. This was during the summer, when many were traveling. Some rabbanim were in New York, others in New Jersey. Rav Shmuel Kamenetsky was in Pennsylvania, and the Skverer Rebbe was vacationing in California.”

Rabbi Efraim Fink, an askan who is close with Harav Moshe Wolfson and has worked on community matters with Margaretten, went with Margaretten to obtain signatures from Rav Wolfson as well as most of the other rabbanim. “This letter was different than any other letter we have worked on,” Fink says. “Rav Wolfson felt this was an issue of hakaras hatov, so he went along with it unhesitatingly and enthusiastically. The same thing happened with other rabbanim as well. And they know that Moshe Margaretten is a devoted and selfless askan — so if he told the rabbanim that this letter was important, they certainly trusted him, and that went a long way in getting them to sign it.”

One memorable encounter for Margaretten was with Rav Shmuel Kamenetsky. To obtain the signature of the venerated gadol, Margaretten and Rabbi Moshe Brown, another person involved in arranging the letter, traveled to Philadelphia, where they knew Rav Shmuel would be in the beis medrash of the yeshivah (despite it being bein hazmanim). But upon arriving during a rainstorm, they had to wait in their car for 30 minutes until the rain fully stopped, for fear of getting any moisture on the letter.

“Rav Shmuel read through the letter,” Margaretten recalls. “Then he smiled, and said, ‘It is a beautiful letter,’ and he began to praise President Trump, saying that he has been so good to the Jewish community, and to everyone in fact, and started telling us how much he loved the idea of this letter.”

One signature was obtained by messenger — Rabbi Shalom Ber Fischel, a prominent askan in the Skverer Rebbe’s inner circle, was sent to California to obtain his Rebbe’s signature. Otherwise, Margaretten says, “the letter never left my possession. I got all the signatures personally. I kept it in a safe place in my house — my kids knew they could not go near it. We virtually never even had any food or drink in the same room with it. If anything had happened to that piece of paper — if it had gotten lost or dirty or wet — we would have had to start the process with the 13 rabbanim all over again. Honestly, carrying this letter around was both exhilarating and terrifying.”

The rabbanim who united in signing the letter had different motivations, Margaretten says, “Some were specifically focused on the president’s declaration that houses of worship should be considered essential. Others said they were grateful for the president’s support of religious liberties and the Jewish community throughout his presidency. Some specifically mentioning his pardoning of Shalom Mordechai Rubashkin.”

By August, Margaretten and his team had obtained 13 signatures. Margaretten says that, although he appreciated how historic this was, “I did have one real regret — that we did not have enough time to get even more signatures. I am sure there are other rabbanim who would have signed as well. But this was such a draining process. We had limited resources and time — time taken away from our prison-reform efforts. And as the weeks went by, and more and more time passed since the President’s May 22 announcement, we knew we could not wait any longer, and had to send it already. I do wish we could have had the time to get more signatures, and felt terrible that there were chashuve rabbanim who were not asked, but under the circumstances, this was, regrettably, the best we could do.”

On August 12, Margaretten drove to Washington and delivered the letter to a contact in the White House.

The next day, the contact told Moshe that she understood the “importance and significance of the letter,” and that she had delivered it the West Wing, with the assurance that the President would see it personally.

On September 9, the White House contacted Margaretten to invite him to the upcoming Abraham Accords signing ceremony — and mentioned that the President had received, and appreciated, the letter from the rabbanim that he had delivered.

Margaretten chose not to publicize the letter. “The motivation behind this was for the rabbanim to show their gratitude, and that of the Jewish community, to President Trump. I had not intended this for any sort of publicity or pre-election endorsement purposes.”

It was not until Motzoei Shabbos, October 24, when Mishpacha Magazine obtained a copy of the letter from a person close to the Trump Administration and tweeted it, that this unprecedented letter became public, and was reported widely across both Jewish and general media.

Some people have expressed unhappiness that the letter was made public.

Margaretten says he had decided not to speak about the letter until this week, when it made national news, and to correct any misconceptions surrounding it.

“While some have reported the purpose of this letter as a pre-election endorsement, that is fake news,” says Margaretten. “This letter was simply signed as an expression of thanks to a president who has been such a great friend to our community.”