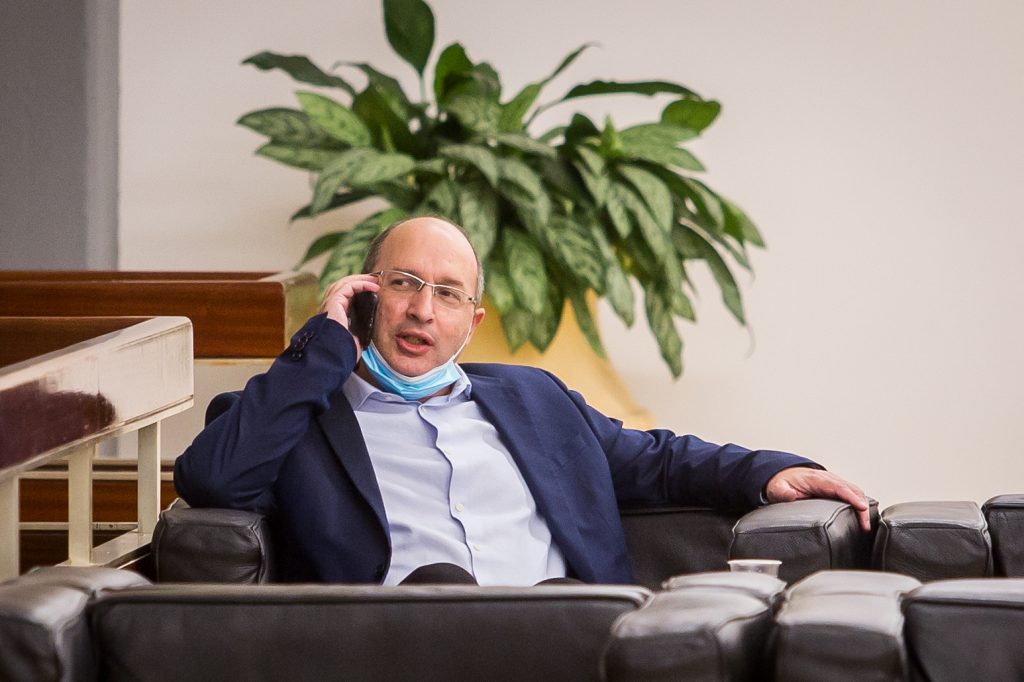 The issue of Israel’s acquiescence in the likely sale of American F-35 fighter jets to the United Arab Emirates has flared up again, with Blue and White party leaders accusing Israeli Prime Minister Binyamin Netanyahu‏‏ of wrongfully bypassing them in the decision-making process.

Justice Minister Avi Nissenkorn (Blue and White) on Sunday went so far as to compare the prime minister’s conduct to the scandal-ridden purchase of German submarines, which was also done without consultation with senior defense officials.

“The fact that the Defense Ministry doesn’t know ahead of time about things that are critical for Israel’s security and that it stays within the walls of the Prime Minister’s Office is improper,” Nissenkorn told Army Radio.

“That is likely what happened in the submarine affair and that is what happened now with the F-35, and that’s wrong,” he continued. “Things like this must be fully reported on ahead of time. If they aren’t it is very serious.”

On Friday, Netanyahu and Defense Minister Benny Gantz released a joint statement saying that Israel had agreed not to formally object to the sale.

But then Gantz issued a separate statement alleging that Netanyahu failed to inform him and other relevant officials about the sale.

Gantz reiterated the charge after Netanyahu called his claims “baseless.”

“Following the signing of the peace agreement with the United Arab Emirates, the defense minister discovered that there were — in parallel — negotiations to sell advanced weapons,” Gantz said in a statement.

He said the talks between the US and the UAE over the jets were “known to Israeli officials who were part of the (normalization) negotiations, but were hidden from the defense establishment, which was not involved.”

Gantz flew to Washington last week where he and counterpart Mark Esper signed an agreement to maintain Israel’s qualitative military edge in the region.

After securing this assurance from the U.S., Gantz and Netanyahu released a joint statement saying that in light of this agreement and promises to supply Israel with yet more powerful weapons, they would not object to the sale of F-35 fighter jets to the UAE.

The proposed sale, subject to approval by the U.S. Congress shortly, will encounter less opposition than if Israel had registered opposition to it.

A senior Israeli defense official, speaking on condition of anonymity after the signing in Washington, told reporters on Thursday night that the document represented a general commitment by the U.S. to maintain Israel’s military superiority but did not specify which weaponry would be included in that, something to be thrashed out in the near future.

“Who can predict coups in the Middle East?” he asked rhetorically at an anti-corruption rally in Tel Aviv, according to Ynet. “The prime minister has again made a decision, which he denies. I think it’s wrong to allow the UAE to be equipped with F-35s. Abu Dhabi is not a danger, but tomorrow others will get the planes and they’ll be turned on us. We can’t have that.

“We need a state commission of inquiry, so the same mistakes won’t be repeated,” he said, referring to the submarine bribery scandal.

Amid much controversy, a proposal to form a commission of inquiry into the submarine scandal was passed, but then overturned by the coalition on a technicality, prompting angry opposition leaders to take the matter to the High Court.