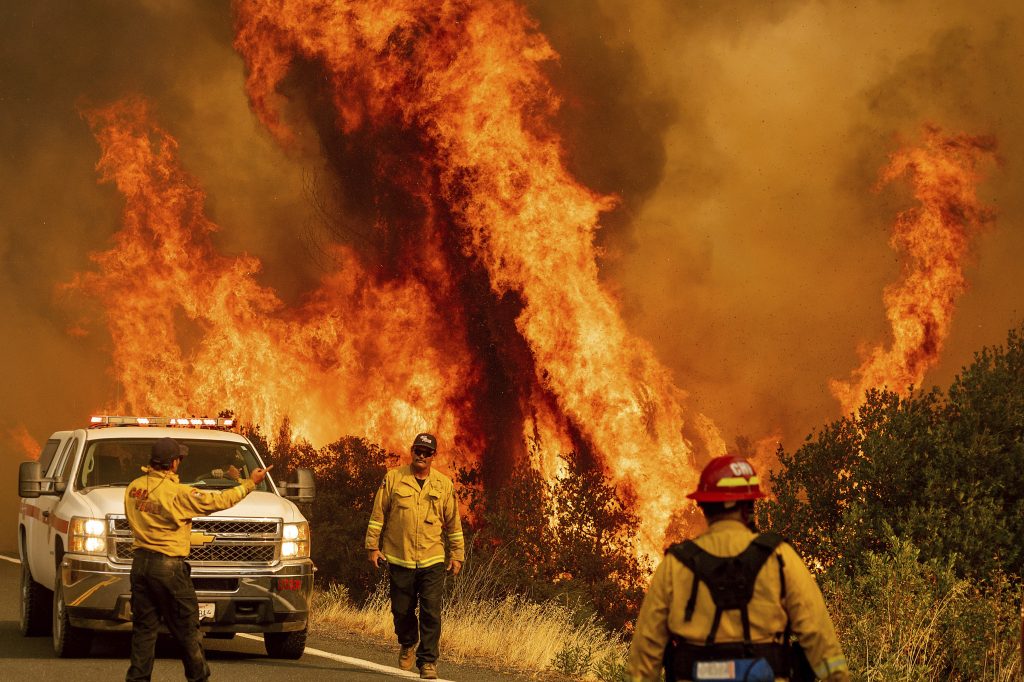 California, which has endured its worst wildfire season in history, is bracing for the most dangerous winds of the year, a forecast that prompted the largest utility to announce plans to cut power Sunday to nearly 1 million people to guard against its equipment sparking new blazes.

Pacific Gas & Electric Co. said the outages would start in far northern California and ultimately could affect 386,000 customers in 38 counties, with many of the shutoffs concentrated in the San Francisco Bay Area. At a Saturday night briefing, utility officials said high winds were expected to arrive midday Sunday and reach 40 to 60 mph (64 to 96.5 kph) with higher gusts in the mountains. Winds that strong can topple trees and send branches into power lines.

Some of the largest and deadliest fires in recent years were started by utility equipment being damaged by high winds, so PG&E has been aggressive about preemptively cutting power when fire conditions are most dangerous. This will be the fifth time PG&E has cut power to customers this year and by far the largest shutdown.

“We obviously recognize that power outages present hardships. That’s why we try to make it as small as we can,” PG&E incident commander Mark Quinlan said, noting that the planned shutdown had been reduced from 466,000 customers.

Cities throughout the region planned to open emergency operations centers and add police officers and firefighters to patrol high-risk areas. Officials also were encouraging people to have their cellphones fully charged or, if they have a landline, to connect an older model phone that doesn’t depend on electricity.

In Berkeley, just east of San Francisco, officials recommended residents consider leaving the hills before Sunday afternoon, especially if they would have trouble getting out quickly during a fire. In neighboring Oakland, where a blaze in the city’s hills in October 1991 killed 25 people, at least 10 parks will close Sunday and Monday.

“I would ask all of the people who live in high-impact areas mimic us and plan ahead of time and do the planning with their neighbors, with their families and within their own households so that if they are asked to evacuate they’re ready and not just then starting to figure it out,” Oakland Assistant Fire Chief Robert Lipp said.

While about one-third of the affected customers will be in the Bay Area, cuts are predicted to encompass parts of the Sacramento Valley, the northern and central Sierra Nevada, the Santa Cruz Mountains, the Central Coast and parts of southern Kern County. The projected shutoffs included 19,000 customers in parts of Butte County, where in November 2018 a blaze ignited by PG&E equipment destroyed much of the town of Paradise and killed 85 people, the most in state history.

Scientists say climate change has made California much drier, meaning trees and other plants are more flammable. Traditionally October and November are the worst months for fires, but already this year California has seen more than 8,600 wildfires that have scorched a record 6,400 square miles and destroyed about 9,200 homes, businesses and other structures. There have been 31 deaths.

Four of the five largest fires in state history occurred since mid-August, when a massive series of lightning strikes sparked hundreds of fires. All of the largest fires have been fully or significantly contained. But more than 6,000 firefighters remain committed to 19 blazes, including a dozen major incidents, according to state fire officials

Almost all of northern California is in moderate to extreme drought. The combination of high winds, very low humidity and a parched landscape has the region on edge.

The National Weather Service issued red-flag warnings for many areas, meaning fire danger is extremely high. It said the conditions could equal those during devastating fires in the Bay Area’s wine country in 2017 and last year’s Kincade Fire that burned a large swath of Sonoma County.

“Given that vegetation is now at or near record dryness levels — much as it was prior to the North Bay firestorm in October 2017 — this is a very concerning forecast,” Daniel Swain, climate scientist with UCLA and the National Center for Atmospheric Research, wrote in an online post.

Southern California, which enjoyed several days of cool temperatures and higher humidity, will see the return of warm, dry Santa Ana winds. A fire weather watch is in effect for much of Los Angeles and Ventura Counties from late Sunday through Tuesday. Relative humidity levels will plummet, and winds could top 55 mph (88.5 kph)  in valleys, with gusts of 75 mph possible in mountain areas.