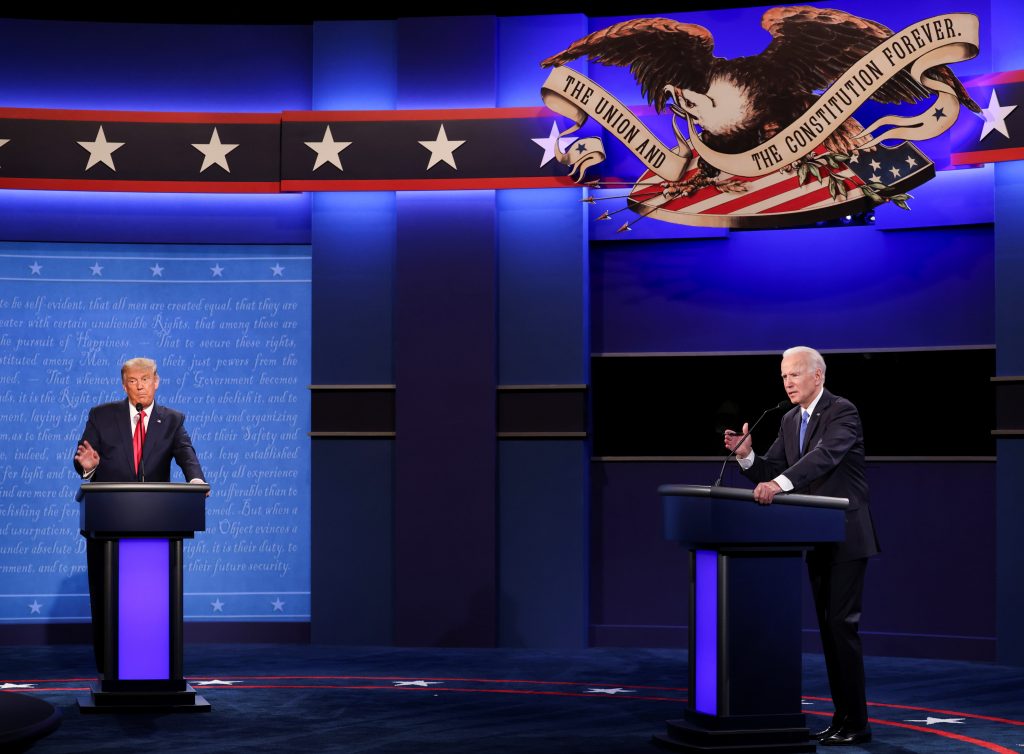 After the first presidential debate was panned so widely that organizers introduced a mute button, Thursday’s second and final debate between President Donald Trump and Democratic challenger Joe Biden was far more civil.

Whether because of that button or the terrible reviews, the candidates interrupted each other far less frequently, even as they clashed on issues ranging from the coronavirus to crime to global warming.

While Trump and Biden responded to each other’s answers — shaking their heads disapprovingly or smiling — the two largely avoided speaking over one another. And neither man tried to speak at length while he was muted during opening questions.

Trump, in particular, was on his best behavior, especially early on, and especially when it came to the moderator, whom he’d repeatedly attacked before the debate.

“So far, I respect very much the way you’re handling this,” Trump said to NBC’s Kristen Welker when she gave him time to respond to Biden at one point.

Because of the pandemic, only around 200 people were seated inside the debate hall in the massive college arena in Nashville. That included a representative of the Commission on Presidential Debates, who was tasked with ensuring each candidate had a two full minutes of uninterrupted time to deliver opening answers on six major topics, according to debate commission chair Frank Fahrenkopf.

A member of each of the Trump and Biden campaigns monitored the person who controlled the mute button backstage, Fahrenkopf told The Associated Press, noting that the button would not be used beyond the first four minutes of each topic.

The button was among a handful of changes implemented by the nonpartisan debate commission to help ensure a more orderly debate following the raucous and widely criticized opening debate 23 days ago. Coronavirus restrictions also remained in place, with attendees required to wear masks at all times and audience members distanced.

Organizers had initially planned to separate the candidates with plexiglass barriers, but the barrier were removed hours before the debate began. A Trump campaign official said the decision was made after White House chief of staff Mark Meadows called Anthony Fauci, the nation’s highly respected top infectious diseases expert, during a walkthrough of the venue site.

Meadows put Fauci on speakerphone and Fauci told those in the room that all a barrier would do was provide a false sense of security, the person said.

The university, a picturesque institution of more than 8,200 students just a mile from Nashville’s Music Row, also hosted a town hall-style debate between Democrat Barack Obama and Republican John McCain in 2008.

There was a far smaller audience this time around.

Only around 200 people were allowed inside, a mix of invited guests of the campaigns and the debate commission, students, the commission’s production team, security, and health and safety personnel. Audience members were seated in accordance with social distancing recommendations; several empty seats separated each person or small group.

All audience members and support staff were required to undergo coronavirus testing onsite and wore colored wristbands as evidence of their negative tests.

Trump and Biden each sought to position himself as the defender of American’s health care, keenly aware that it ranked among the top issues for voters even before the coronavirus pandemic struck the nation.

But Trump’s efforts to repeal and undermine the Obama-era Affordable Care Act proved to be a liability, as Biden hammered his efforts to strip coverage from tens of millions of Americans and his lack of a plan to cover those with preexisting conditions.

Biden, by contrast, fended off Trump’s attack that his plan to reinforce the Obama-era law with a “public option” amounted to a step toward socialized medicine by relying on his well-established public persona — and his vanquishing of Democratic primary rivals with more liberal health care policies.

“He thinks he’s running against somebody else,” Biden said. “I beat all those other people.”

TRUMP TONES IT DOWN

Three weeks after drawing bipartisan criticism for his frequent interruptions and badgering of his Democratic rival, Trump adopted a more subdued tone for much of the debate.

Trump took to asking moderator Kristen Welker for the opportunity to follow up on Biden’s answers — “If I may?” — rather than just jumping in, and he thanked Welker repeatedly to boot.

Sure, there still were digs.

“We can’t lock ourselves up in a basement like Joe does,” Trump said, reprising his spring and summer attacks on Biden staying at his residence rather than campaigning in-person amid the pandemic.

The two men had a lengthy back-and-forth about their personal finances and family business entanglements.

But on the whole, voters at home got something they didn’t get on Sept. 29: a debate.

Aiming to alter the trajectory of the race, Trump returned to a tactic that he believes boosted him to the Oval Office four years ago — staccato personal attacks on his opponent.

Trump repeatedly leveled unsupported allegations against Biden and his son Hunter in an attempt to cast his rival and his family as corrupt.

When the Democrat sought to change the subject from the president’s attacks on his family to issues more relatable to voters, Trump fired back with the charge that Biden’s canned line reflected him being “just a typical politician,” mockingly adding, “Come on, Joe, you can do better.”

Both candidates struggled to explain why they weren’t able to accomplish more while in office, falling to the familiar tactic of blaming Congress for its inaction.

A larger question may be whether voters are moved at all, especially those undecided voters whom both candidates are trying to win over, especially given that more than 47 million Americans have already cast ballots.

With centuries of institutional racism coming to a head in 2020, it’s been a bit of disconnect to see a 74-year-old white Republican and a 77-year-old white Democrat battle for the presidency. Trump and Biden did little to dispel that disconnect.

Welker offered both multiple opportunities to talk directly to Black Americans. Both men said they understood the challenges Black citizens face, but the segment amounted mostly to them blasting each other.

Trump blamed Biden as an almost singular force behind mass incarceration, especially of “young Black men.” Trump declared himself “the least racist person in this room” and repeated his claim that “nobody has done what I’ve done” for Black Americans “with the exception of Abraham Lincoln, possible exception.”

Polls suggest many young voters of color do not support Trump but aren’t particularly enthusiastic about Biden either. It’s unlikely their final debate altered that view.

Trump and Biden faced off on global climate change in the first extensive discussion of the issue in a presidential debate in 20 years.

Biden sounded the alarm for the world to address a warming climate, as Trump took credit for pulling the U.S. out of a major international accord and asserted he was trying to save American jobs, while taking credit for some of the cleanest air and water the nation has seen in generations.

Biden, tapping into an issue of particular importance to his base, called for massive investment to create new environmentally friendly industries. “Our health and our jobs are at stake,” he said.

Biden also spoke of a transition from the oil industry, which Trump seized upon, asking voters in Texas and Pennsylvania if they were listening.

Biden finally got a chance to talk a little foreign policy. But only a little. The former vice president loved the topic in the early months of the Democratic presidential primary, but the general election has been dominated by the pandemic and other national crises.

It certainly wasn’t a deep dive into a pool of complex issues.