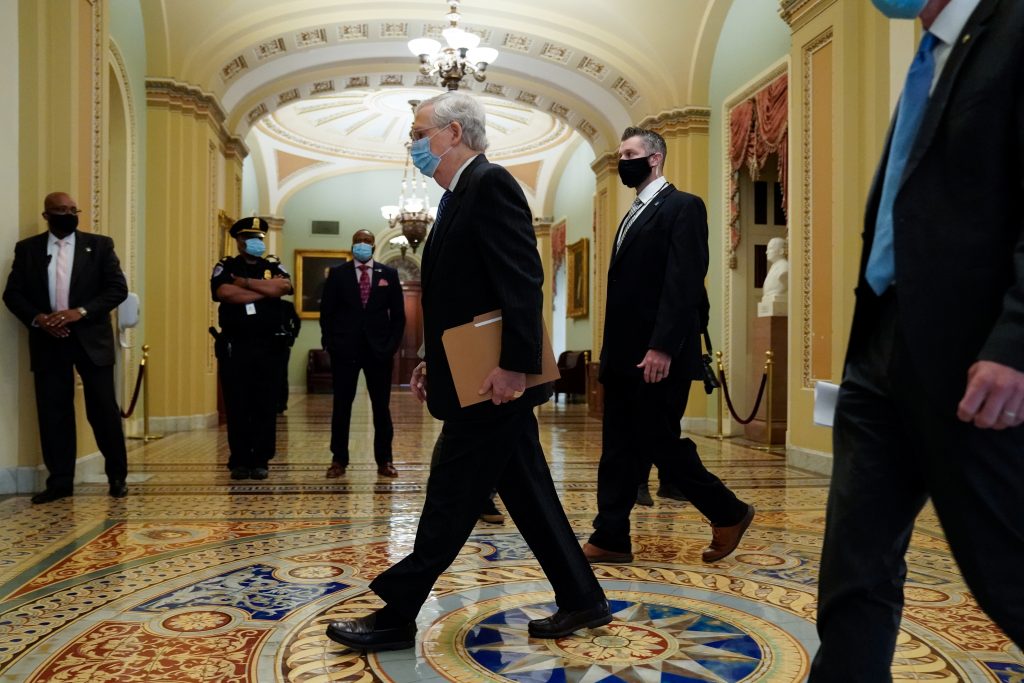 The White House and Democrats in the U.S. Congress moved closer to agreement on a new coronavirus relief package on Tuesday as President Donald Trump said he was willing to accept a large aid bill despite opposition from his own Republican Party.

With just two weeks to go until the U.S. presidential election, Trump signaled a willingness to go along with more than $2.2 trillion in new COVID-19 relief, as Democrats had been pushing for months.

“I want to do it even bigger than the Democrats,” Trump said in an interview with Fox News, as talks between Pelosi, a Democrat, and Treasury Secretary Steven Mnuchin continued with the goal of getting something to pass Congress before Election Day on Nov. 3.

Pelosi, speaking to reporters after a mid-afternoon call with Mnuchin, was asked about prospects for a legislative package by the end of this week.

In a letter to her fellow Democrats on Tuesday evening, however, Pelosi made no mention of wrapping the battle up by week’s end. “I remain hopeful that we can reach an agreement before the election,” she wrote.

Pelosi Deputy Chief of Staff Drew Hammill said that a 45-minute call between the speaker and Mnuchin was productive “as they move closer to an agreement.”

Hammill said on Twitter that negotiations would continue on Wednesday.

Majority Leader Mitch McConnell told reporters that the Republican-led Senate would consider a Pelosi-Mnuchin deal if it wins House approval, but provided no time frame.

The White House has proposed $1.8 trillion in coronavirus relief, while Pelosi is pushing for $2.2 trillion.

In an interview with Bloomberg, Pelosi said aid to state and local governments and Republican demands for liability protection for businesses remain sticking points. But she suggested the Democrats could find grounds to agree on liability protections if the administration agrees to eliminate certain language sought by McConnell that she believes would overshadow protections for workers.

Senate Republicans have repeatedly stated their opposition to additional COVID-19 relief spending near the $2 trillion mark and have focused instead on smaller initiatives.

As negotiations heated up, several were wary, non-committal or just plain negative about aid totaling $1.8 trillion or more.

Trump predicted that Senate Republicans would fall in line if a broad bipartisan deal is reached. He also said he would be willing to accept a deal passed mainly with Democratic support.

“Not every Republican agrees with me, but they will,” he said. Trump added he specifically expects support from McConnell: “He’ll be on board if something comes.”

Pelosi and Mnuchin have been negotiating intermittently since August on a fresh plan to aid Americans slammed by the coronavirus pandemic, which has infected more than 8.2 million people in the country, killed over 220,000 and thrown millions out of work.

Any new stimulus would be in addition to $3 trillion in relief that Congress approved earlier this year.

The head of the Association of Flight Attendants-CWA, Sara Nelson, sent a letter to members of Congress on Tuesday urging action before the election.

“Now is the time. There is no retroactivity that Congress can apply to the human toll caused by delayed relief,” she said. More than 32,000 airline workers have been furloughed while awaiting another round of aid.

The Senate also plans to vote on Wednesday on a $500 billion-plus Republican proposal to include unemployment benefits and aid to schools. It would provide people with $300 in federal weekly unemployment benefits, while the Democrats want to return to the $600 weekly level in a measure approved earlier this year.