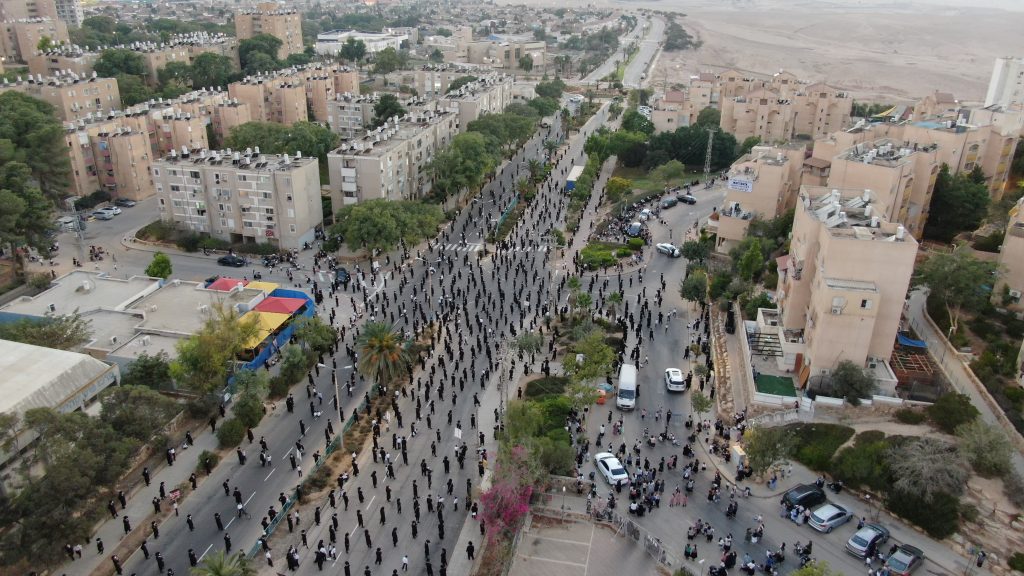 A Kiddush Hashem on a grand scale took place in Arad on Monday at a mass tefillah rally. Thousands gathered to protest against the raging incitement against chareidi Jews in Eretz Yisrael, and its odious results – including arson against a chareidi shopping center and a number of chareidi-owned businesses. The blazes caused millions of shekels in damage.

The rally, held in full compliance with Health Ministry guidelines, was approved by the police. Participants wore masks and maintained social distancing, and were widely praised in local and international media. Police estimated the size of the crowd at 3,000 people.

The event came against the backdrop of a wave of hatred and incitement against chareidim, tagging them as spreading disease.

The chareidi residents of Arad, who live among the secular population, have been among the first to feel the effects of the hatred. Since the beginning of corona, the frum population has been in strict compliance with all regulations, as evidenced by the low levels of infection in the city, baruch Hashem.

That being the case, it is impossible not to reach the painful conclusion that it is not fear of contagion that is behind the incitement, but a deep-seated hatred toward those who follow the path of Torah.

For years, the community has had to fight every step of the way for its rights. The most basic rights require extensive lobbying of city leaders, who have doggedly fought against the community since it was established.

This atmosphere has a devastating effect, conveying the message that a community that comprises a significant part of the population is second rate, and its needs are of a lower priority.

This culminated last week in a fire that was intentionally set to destroy chareidi-owned businesses.

The tefillah rally was not an effort to express horror at an isolated incident, severe as it was. It was a cry to save the residents “miyad achi” – from harassment at the hands of our brethren. In the days before the rally, numerous hair-raising stories were heard about epithets that had been hurled, dogs set upon children, girls fleeing in fear, clerks harassing people, threats that would be carried out if not for people’s fear of retribution by authorities, and much more.

It’s important to note that it’s not everyone. Not even a majority. The residents of Arad are good people, and live in harmony with their neighbors. But there is a definite trend, and it is widespread enough that there is almost no one who has not experienced it one way or another.

Harav Mordechai Wolkowitz, the Mara d’Asra, was the first speaker. He described the peaceful decades that the city experienced until recent years, when it has become evident that there are entities trying to incite and cause division. He noted that the rally was an effort to promote peace and tranquility.

The central message of the event was delivered by Harav Avraham Mordechai Abramowitz, the Mashgiach of Yeshivas Lev Simchah: “The young man did not set the Arad Municipality ablaze, nor did he go to his local shopping center or even his own living room. He knew exactly where he was going,” he declared. “I have been living in this city for 30 years, and until recent times, we always lived here with mutual understanding. Recently, there has been a wave of incitement that has been acted upon by a group of city residents; most live in peace and harmony with us.”

He was followed by the secretary general of Agudas Yisrael, Deputy Mayor of Bnei Brak Rabbi Chanoch Zeibert, who declared that every Jew has a right to live any place in Eretz Yisrael. He mentioned his days in the city of Arad decades ago, when local residents warmly welcomed the chareidi arrivals.

MK Rabbi Yaakov Litzman said that he was inviting the media to see how it was possible to maintain health guidelines even at a protest, unlike other places, where they take risks and don’t social distance. “The city of Arad is only an example. If we do not mitigate the violence here, it will erupt all over the country. We must not forget that for decades, chareidim have been living peacefully in Arad, in harmony with all residents, until the mayor came along and decided to make it difficult for them for no reason. As a result of incitement by the mayor – a member of Yesh Atid – we have witnessed a violent outburst and the burning of stores.

“What has the mayor done for the residents? Gerrer Chassidim established an emergency care center, they opened businesses and helped the city thrive. The mayor said to me, ‘I’ll provide everything if the Gerrer Chassidim don’t come anymore.’ We have to sue the mayor to pay out of pocket for the arson. He is to blame, as it is the result of his harsh incitement. I call on everyone to strengthen those who were affected by the fires. Patronize their businesses, and give them support. The government should also be compensating those who were affected by these acts.”

The event was concluded by Chairman of Agudas Yisrael Harav Yosef Kupperburg, who offered divrei chizuk. The crowd dispersed rapidly and with dignity. The residents of the city who witnessed the scene noted that they were impressed by the behavior of those present, and expressed their horror at what had been done to the business owners. Many declared that they will support the chareidi residents of the city and will not abet hatred and incitement.