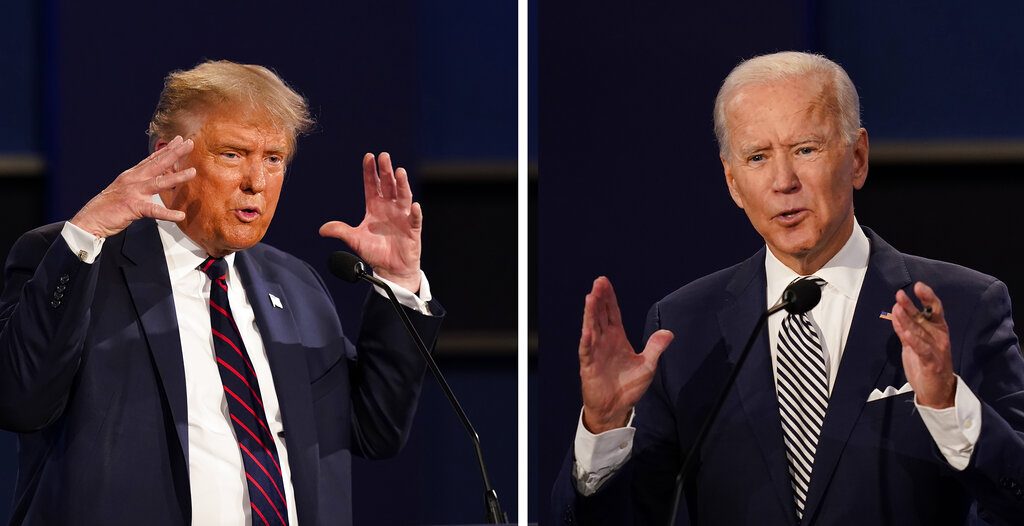 U.S. presidential rivals Donald Trump and Joe Biden will court early voters on Sunday as their campaigns step up events ahead of their final debate this week.

Trump on Sunday will head to Nevada, a battleground state where more than 100,000 voters have already cast ballots, according to state data. Trump will campaign every day leading up to Thursday’s debate in Florida, including stops in Arizona and North Carolina, campaign spokesman Tim Murtaugh said.

Biden on Sunday heads to North Carolina, where 1.2 million voters have cast their ballots, according to state data. Biden’s running mate, Kamala Harris, will return to the campaign trail on Monday with a visit to Florida to mark that state’s first day of early, in-person voting.

Thus far, 25.83 million people have already cast a ballot in the Nov. 3 presidential election, according to the U.S. Elections Project, shattering records. Much early voting is due to safety concerns about the pandemic that has killed more than 218,000 Americans and infected 8.1 million others.

Democrats hold a significant advantage in early voting, largely driven by mail balloting. Of the 10.6 million mail ballots cast, 5.8 million have been cast by Democrats, according the U.S. Election Project, run by the University of Florida.

Trump lags in national and battleground opinion polls and the latest figures from his campaign show he also trails in fundraising as the race intensifies.

In a memo sent to donors over the weekend, Biden campaign manager Jen O’Malley Dillon said the national figures are misleading because must-win states are close. “We cannot become complacent because the very searing truth is that Donald Trump can still win this race, and every indication we have shows that this thing is going to come down to the wire,” she wrote.

On Saturday, Trump campaigned in Michigan and Wisconsin, two battleground states he narrowly won in the 2016 election. At Saturday’s rally in Muskegon, Mich., Trump targeted Michigan Governor Gretchen Whitmer, a Democrat, several times. He blasted state rules to stop the spread of coronavirus, calling her “dishonest,” and made light of a right-wing plot uncovered by the FBI to kidnap her.

“Hopefully you’ll be sending her packing pretty soon,” Trump said, prompting the crowd to yell back “Lock her up!” several times.

Whitmer responded on Twitter to the chants. “This is exactly the rhetoric that has put me, my family, and other government officials’ lives in danger while we try to save the lives of our fellow Americans,” she wrote.