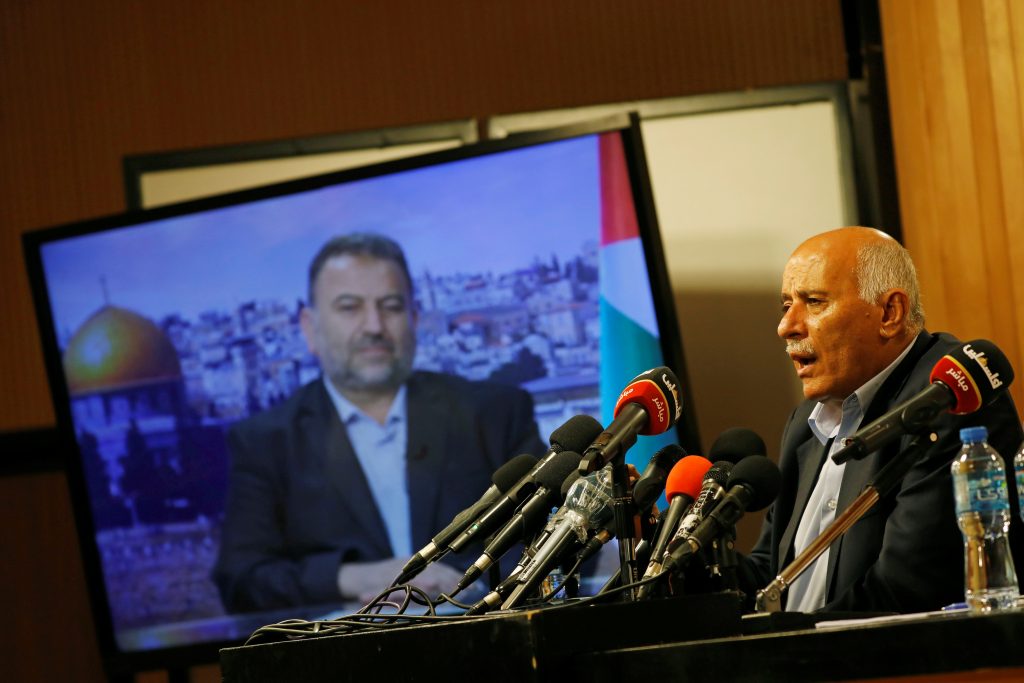 Arab states have stopped giving money to the Palestinian Authority because of American pressure, deputy Hamas leader Saleh al-Arouri said on Friday in an interview with Hamas-run Al-Aqsa channel.

“The Palestinian issue was central throughout its history, but we’ve recently come to a point where there’s a desire to eradicate it,” Arouri said. “Of course, the Israelis are outlining the parameters for this. The Trump administration is implementing it with all its connections in order to impose this map by force.”

Accordingly, Arouri claimed the goals of the Trump administration’s so-called Deal of the Century was to erase the Palestinian issue and make Israel a legitimate part of the Middle East. “This won’t come to pass without a resolution to the Palestinian matter,” he warned.

Amid the backdrop to his comments, Arouri noted that “Israel isn’t prepared to pay” what the international community demands, nor recognize the Palestinian rights. “The Palestinian, Arab and Islamic right is all of Palestine. This is our right and no one can change our minds in this regard.

“Even when the international community discusses a state within the 1967 borders with the capital in al-Quds [Yerushalayim], the occupation [Israel] doesn’t want to commit to that. [Israel] wants a resolution that establishes its control of Jerusalem and particularly the West Bank. The Palestinian residents there won’t have sovereign citizen rights, rather merely as residents. The Trump administration stupidly and insanely rushed to implement this vision.”

He added: “First of all, Israel accelerated construction in the settlements, especially in Jerusalem and the rest of the West Bank. It continued imposing the siege on the Gaza Strip to perpetuate the endless suffering there.

“The American administration declared the Deal of the Century and recognized Jerusalem as the capital of this entity, the united Jerusalem. The administration recognized the right of the entity to annex the settlements in the West Bank, moved the embassy to Jerusalem, and pressured countries across the globe to move their embassies there as well.”

Additionally, the senior Hamas official continued, the administration sponsored the normalization treaties between Israel and the United Arab Emirates and Bahrain, while “skipping over the Palestinian issue.” Arouri argued that the U.S. applied immense pressure on Arab states in this regard.

“Obviously, Arab states have the Saudi initiative, which says that when a Palestinian state with Jerusalem as its capital is established within 1967 borders, diplomatic relations between [Israel] and the Arab-Islamic region will normalize. We, of course, oppose integrating the entity and making it a part of the region. But now, normalization with several states means shunning the Palestinians conclusively,” he told Al-Aqsa channel.

Arouri went on to say that the Palestinian Authority, Palestinian Liberation Organization and Fatah faction were under heavy pressure because they are part of the international and regional system. Conversely, he said, “Hamas is a resistance movement.

“Neither the United States nor the international community has the tools with which to pressure us. The siege on Gaza was forced on us and we are in a daily struggle against the occupation in the Gaza Strip. They don’t have the means to pressure us, such as shutting down the PLO office in Washington or the international Middle East Quartet [the U.S., United Nations, European Union, and Russia] or anything of the sort.”

Hamas’ deputy political leader noted that the U.S. severed monetary aid to UNRWA, the U.N.’s relief agency for so-called Palestinian refugees, and asked other countries to do the same. “There are Arab countries that froze their commitments to the Palestinian people, whether via the PA or PLO, because of an American decision. To be clear, an American decision. They came to our brothers in the PA and told them: ‘We won’t pay you a thing after today.'”

Arouri stressed that all Palestinian factions were opposed to the Deal of the Century and that Hamas had rejected an American invitation to discuss it.