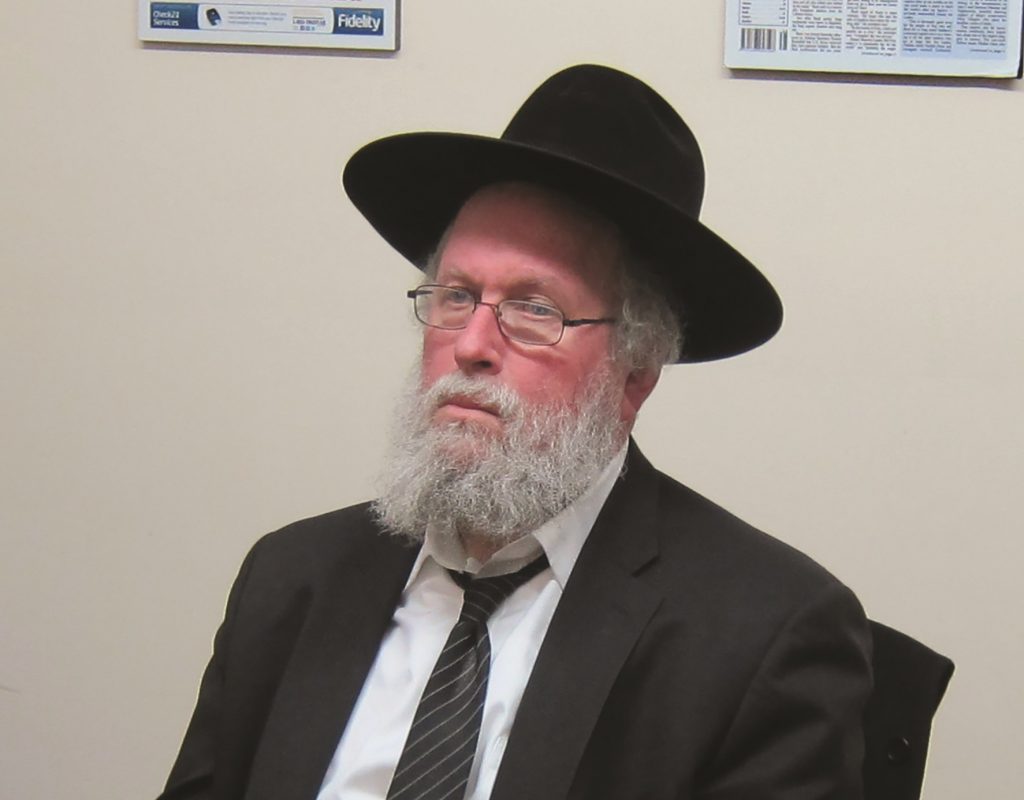 The past few weeks have been challenging for Yidden in the New York metropolitan area. While we hoped to observe the Yamim Nora’im with tranquility tempered with proper solemnity, followed by a joyous Sukkos infused with true simchah, we are unfortunately faced with a dual challenge; an uptick in the health crisis in our midst, and the daunting restrictions that the government has imposed on our shuls and yeshivos.

In a discussion with Hamodia, Harav Elya Brudny, shlita, Rosh Yeshivah in Mirrer Yeshiva and a chaver of the Moetzes Gedolei HaTorah of Agudas Yisroel of America, shared his insights into the predicament that currently envelops the Jewish community in the New York area.

Over the last few weeks, there has been a great deal of negative feeling in the Jewish community towards governmental authorities regarding the restrictions imposed on shuls and the closure of yeshivos. There is a sense that despite the fact that these limitations were put in place to protect the health of the residents during the current outbreak, there is an unwarranted imposition on our religious freedoms and even a contention by some that there is some underlying anti-Semitism involved.

Yet the undeniable fact is that there is a continued proliferation of this virus and a weak response from the community to stem its spread, resulting in restrictions on Jewish communal life.

How does the Rosh Yeshivah view this situation?

There is a consensus by both governmental agencies and the medical field that COVID-19 is extremely contagious, and it needs extreme measures to control its spread. Conventional wisdom calls for us to implement the safety measures which control the infection of others, which include social distancing, wearing a mask and washing our hands.

Since the shuls were allowed to reopen before Shavuos until I left for the mountains at the beginning of Chodesh Av, I davened in the Agudah of Madison, under the leadership of Harav Yisroel Reisman, shlita, and during all the minyanim we adhered to these measures. Everyone spread out, at times the minyanim were even divided into smaller groups, and we all wore masks during davening, which was not a mechitzah that divided us from Avinu Shebashamayim. It may be a bit unpleasant, but it is something which seems to me a davar pashut that it must be done.

We all know the value the Torah places on shemiras hanefesh. Harav Yisrael Salanter, zt”l, publicly ate on Yom Kippur in Vilna during a cholera epidemic to impress on the populace the importance of preserving one’s life. It is also told that during the last Yom Kippur of the life of the Rizhiner, zy”a, he felt weak and sent a she’eilah to the Dayan asking if he could break his fast. When it was denied, it was said that he explained the passuk in Yechezkel (20:25), “chukim lo tovim,” to mean that although all the halachos of the Torah are good, nevertheless they will be ruled by people who are not fit to rule properly, and the result will not be good. The Rizhiner specifically connected this to the inyan of shemiras hanefesh.

In addition, I remember when I learned in Brisk, my Rebbi Harav Yoshe Ber, zt”l, spoke in his shmuess before Yom Kippur about the importance of shemiras hanefesh. He quoted from a letter that Harav Chaim Brisker wrote to Harav Zalman Sender of Krinik in which he wondered why he was hesitant to eat in his illness on Yom Kippur. “If you would have a boy whose eighth day fell on Shabbos, would you hesitate to perform the bris on Shabbos because it desecrates the Shabbos? Certainly not, because that is what the Ribbono Shel Olam wants. So why do you hesitate in this case?” I think that Rav Yoshe Ber felt it was vital to convey in his shmuess that it was of utmost importance to emphasize to young talmidim that shemiras hanefesh transcends everything in the Torah.

The last Be’er Hagolah in Choshen Mishpat (426:90) gives a fascinating explanation for the reason why the Torah commanded us about shemiras hanefesh. “The Ribbono Shel Olam created the world in His kindness in order to benefit the creation, who should recognize His greatness and serve Him by fulfilling His mitzvos and His Torah … and bestow reward for their toil. Someone who endangers himself seemingly is repulsed by the will of the Creator and does not want to serve Him nor receive His reward. There is no greater heretical desecration than this.”

So we know from all sides that the Torah demands that we do our utmost to protect our own lives and the lives of others. So why is there a resistance in our circles to comply with the safety precautions that all recommend?

I think that there is a righteous resentment at the way the government clamped down on our batei knesses. Certainly, a shul with the capacity of several hundred can accommodate more than just 10 mispallelim. There is a callousness on the part of the government officials in the manner in which they cast aside what is important to us. And we certainly have a right to be upset and do whatever is within our legal power to retain our rights. But the methods that are being employed are not what the Eibishter wants from us in galus America.

Over 200 years ago, Harav Chaim Volozhiner cried when he foresaw the travails of this final station of our long stay in galus. He saw that in the welcoming atmosphere of the American government and society, there would be millions of Yidden lost to the “melting pot” of this land. After being welcomed to join the culture of America, we forgot what galus is all about.

Hashem gave Klal Yisrael two chances to reach its shleimus in Eretz Yisrael. When we did not achieve it, He sent us into galus, where we wandered for two millennia. We must remember that over the past few weeks, we said 12 times, “Umipnei chata’einu galinu mei’artzeinu” — we were exiled because of our sins. Because of that, we can’t achieve the closeness to Hashem that we want. The goal for us in galus is for us to shteig, to grow from our experience and draw closer to Hashem. Instead, as the passuk says in Tehillim, “Vayisarvu bagoyim vayilmedu mima’aseihem — they mingled with the nations and learned from their actions.” It is to our detriment that we picked up the mentality that we should copy what we see and hear being done by the nations of the world. Although other segments of society act brazenly to demand what they feel is rightfully theirs, our mindset should not be like that. Rather, we we must understand that we have a different tachlis in galus.

I am not someone to be a mochiach larabim, to chastise the public, but since you are asking, I must answer that this hashkafah must be taught to our young, and it must be reiterated for the old.

During the summer months, when there were virtually no COVID-19 cases in the community, we more or less moved on with our lives. Has this hamstrung us in our response when the current uptick began?

Let’s be realistic. Even before the summer, we got complacent pretty quickly. It did not take long for us to forget the situation we had before Pesach, with the constant wail of Hatzolah sirens as they rushed to transport patients to emergency rooms. Or the numerous levayos that were taking place each day. At the time, we knew it was shreklach, but our memories were short. We quickly became complacent in our safety precautions, so when the summer calm came and went, it was already customary not to practice what was asked of us.

Does the Rosh Yeshivah feel that the community’s reticence to comply with the safety guidelines is an outgrowth of a mistrust of medical professionals and health experts, or perhaps the politicization of the pandemic for partisan reasons?

I think that there are no real arguments concerning the facts of this virus. Everyone agrees that it is contagious, and it requires strict adherence to contain the spread. The politicization of the virus is everyone trying to cash in on it for personal or partisan gain. But that it no reason for us to ignore the obvious and disregard what is incumbent on us to do.

With the toxic environment that has enveloped us, how can we effectively address the crisis and strengthen the cooperation and coordination between the community and government agencies?

There is certainly a lack of appreciation of religion in general, and of Yiddishkeit in particular, in the secular society. They have no understanding of our religion and indeed envy the close relationship we have with Hakadosh Baruch Hu. Over the Yamim Nora’im we said over and over again, “Atah vechartanu mikol ha’amim” — Hashem chose us from amongst all the nations. They cannot comprehend that when we celebrate Simchas Torah, it is the culmination of our avodah of the Yamim Nora’im. We imbibe to experience the simchah of growing closer to Hashem.

But we must keep in mind what Yeshayah Hanavi (1:14) said in the haftarah of Shabbos Chazon: “Chadsheichem umoadeichem sanah nafshi hayu alai laTorah — I disliked your festivals; they were a burden on Me.” If our celebrations are dependent on what type of expensive liquors we provide at the hakafos, and what type of kiddush we provide for Chassan Bereishis, then we forfeit our exalted status.

I think we need a dual introspection of our Simchas Torah, both from a ruchniyus point of view and from the gashmiyus point of view. Do our hakafos represent the sisu vesimchu besimchas haTorah, rejoicing with the Torah we have and we learn, or is it an excuse to ply ourselves with expensive liquors and the finest cuts of meat?

What steps should the community take in order to build a more mature relationship with the government officials who oversee these issues within our community?

We must cease blaming the messenger and remember the message, which is that we were put in galus to bring out the best in us and to grow from the experience. This includes living as we are expected to live in galus.

We must also keep in mind that noncompliance breeds eivah, a hatred that the umos ha’olam have for us. Unfortunately, we have become a focal point for the entire United States, where they can point to the clusters of infection in our areas and proclaim that we brought the disease upon them. Can we forget what we experienced in our history when the Yidden were blamed for plagues and falsely charged with poisoning wells?

In conclusion, we must fulfill venishmartem meod l’nafshoseichem; understand that although we rightly feel hurt by the overreach of the government, we must respond a Yidden in galus; and lastly, we must remember that Hashem is the Borei Refuos.