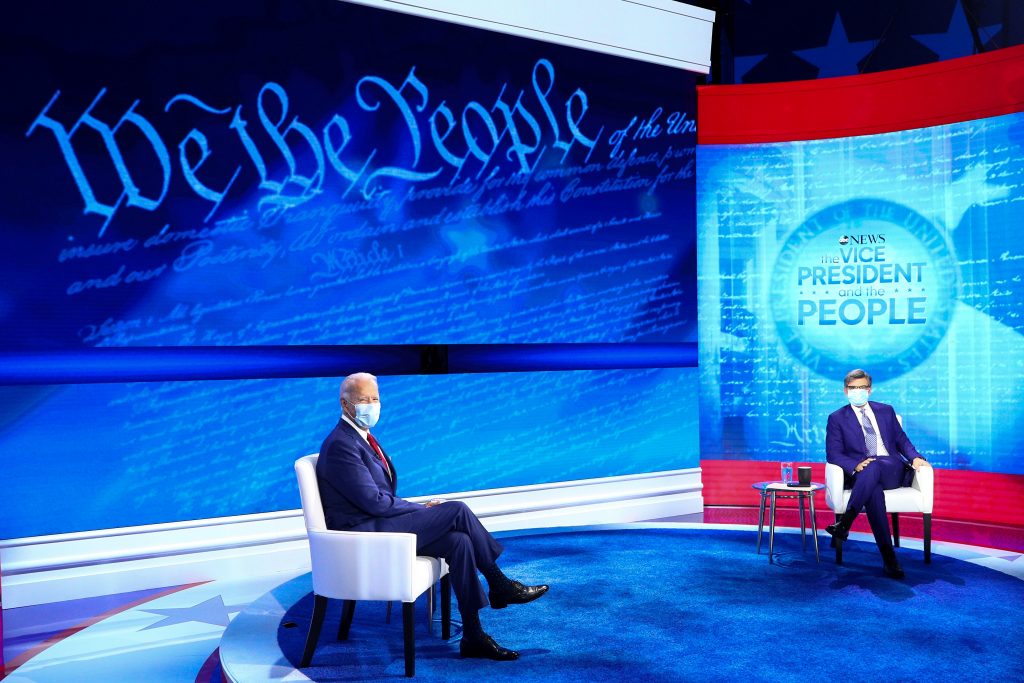 President Donald Trump and Democratic challenger Joe Biden will return to the campaign trail on Friday with visits to three battleground states, a day after the two contenders clashed from afar during dueling town halls.

The split-screen events, which replaced a presidential debate that was canceled in the wake of Trump’s coronavirus diagnosis, also highlighted the sharp contrast between the two candidates’ approach to the campaign less than three weeks before the Nov. 3 election.

A combative Trump, sparring with moderator Samantha Guthrie on NBC, refused to condemn the bizarre conspiracy theory QAnon, claimed the 2020 election is rife with fraud and questioned whether masks can help combat the spread of COVID-19. Biden delivered policy-heavy answers and focused his attacks on Trump’s handling of the pandemic.

Biden has led the contest for months, according to polls, and it was not clear whether Trump’s aggressive posture would succeed in altering what has been a stable race despite a whirlwind of news.

More than 18 million Americans have already cast ballots, far more than at a similar juncture in 2016, according to a tracker at the U.S. Elections Project at the University of Florida.

Trump will travel to Florida and Georgia, two states that are seen as crucial to his chances of victory, while Biden will visit two cities in Michigan, another battleground state.

The second presidential debate had been scheduled for Thursday, but Trump pulled out of the event after organizers said it would be virtual to lessen the risk of infection.

Trump, who received treatment for several days at a military hospital after he contracted the virus two weeks ago, has since returned to headlining massive campaign rallies.

During his town hall on NBC in front of voters in Miami, Trump declined to say when he last tested negative for the virus before announcing his diagnosis, a question that White House physicians have also refused to answer.

He also questioned whether masks are effective at stopping the spread of the coronavirus, contradicting the consensus among public health experts, including those in his own administration.

In Philadelphia, Biden outlined to voters his plans to combat the pandemic and revive the economy by prioritizing testing, funding local and state governments and hiking taxes dramatically on corporations and the wealthy.

He again deferred when asked whether he supports adding justices to the Supreme Court, an idea known as “court-packing” that some Democrats favor as a response to Republicans’ hardball tactics.

“It depends on how this turns out,” he said of the ongoing confirmation hearings for Trump’s latest nominee, Amy Coney Barrett.

But the coronavirus dominated the proceedings, just as it has loomed over the last seven months of the campaign.

Trump, who has downplayed the crisis, again said on Thursday that the country has “rounded the corner,” despite surges in cases in many states. He also defended his own personal approach to the virus, including hosting a Rose Garden event last month after which multiple attendees, including himself, tested positive.

Biden‘s campaign said on Thursday that three people who recently traveled with him or his running mate, Senator Kamala Harris, had tested positive. Neither candidate had close contact with the infected individuals, the campaign said, but Harris canceled her in-person events through Sunday as a precaution.

The third presidential debate is scheduled for Oct. 22.