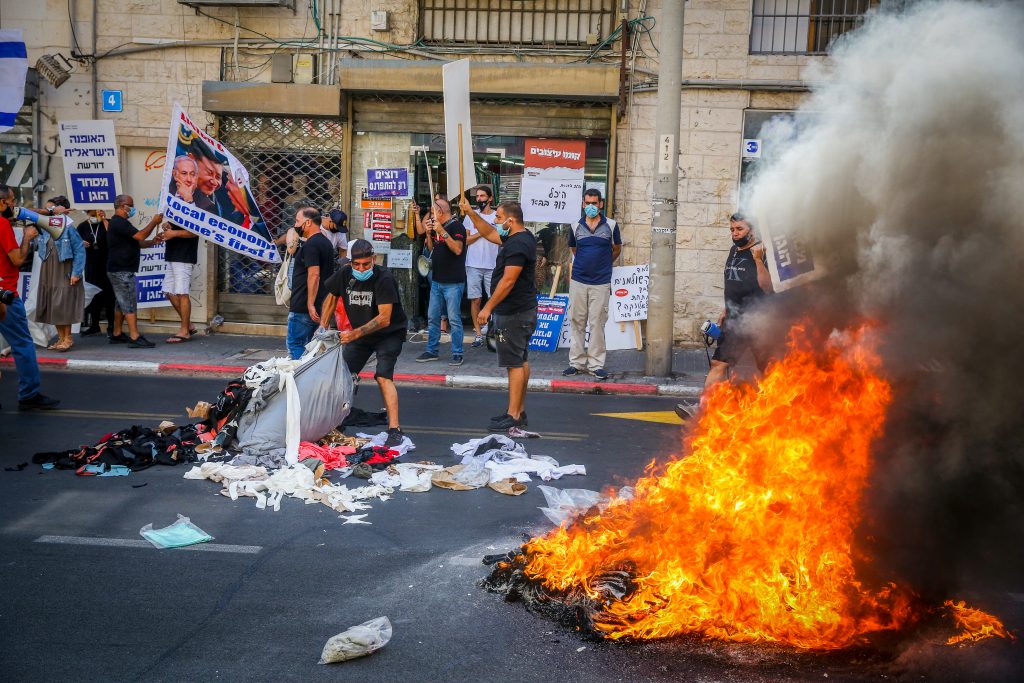 While the country was on the verge of coming out of the second coronavirus lockdown, some shopkeepers in Tel Aviv were saying it’s too late for them.

Business owners on Jaffa Street, where there are numerous textile and clothing firms, blocked traffic and burned merchandise in protest against the government’s handling of the economic crisis.

Protesters shouted, “You’re killing us” and held signs reading “we’re all closing our businesses,” and other angry messages, according to media reports.

The coronavirus cabinet reportedly decided to lift some restrictions on businesses starting Sunday, many will not be able to reopen due to financial losses already incurred during the lockdowns.

“We have a collection of dresses that’s just going in the trash,” one owner told Channel 12 news.

“Now the winter collection is coming, the money is gone, the workers are home, we have small kids at home, we have workers. The bank is calling for answers, what are we supposed to tell them? There’s nothing we can do with the merchandise.”

“The government has no conscience and it is dragging us into a severe economic crisis. People are not able to get through the month and they do not allow us to earn a decent living. Without an organized plan we will simply collapse – we have nothing to lose anymore so we go to war for our lives and the lives of our families,” Shimon, a textile salesman from Holon was quoted as saying by Ynet.

Roi Cohen, president of LAHAV, the Israel Chamber of Independent Organizations and Businesses, asked why green cities were remaining closed if 60% of the country is green.

“People here are collapsing, people have no money to bring home, to support their families,” said Cohen to Ynet. “The State of Israel must stop with this collective punishment of full closure. The closure policy harms the economy, society, the psyche – all the factors that create stress and tension and ultimately harm health.”

Cohen added that outlets such as Max Stock and supermarkets have begun selling clothes and toys and are profiting from the closure of smaller businesses during the lockdown.

“The businesses that are demonstrating today are not asking for alms or favors, they want to work,” said the chairman of the lobby for small and medium businesses in the Knesset, MK Oded Forer, to Ynet.

“The government is not acting in accordance with common sense and not in accordance with the data emerging from the field. As evidence, even when I asked Gamzu yesterday, along with dozens of other self-employed people, why the streetside shops were closed, he did not have a clear answer. These sights are difficult and only show the growing despair of small businesses.”