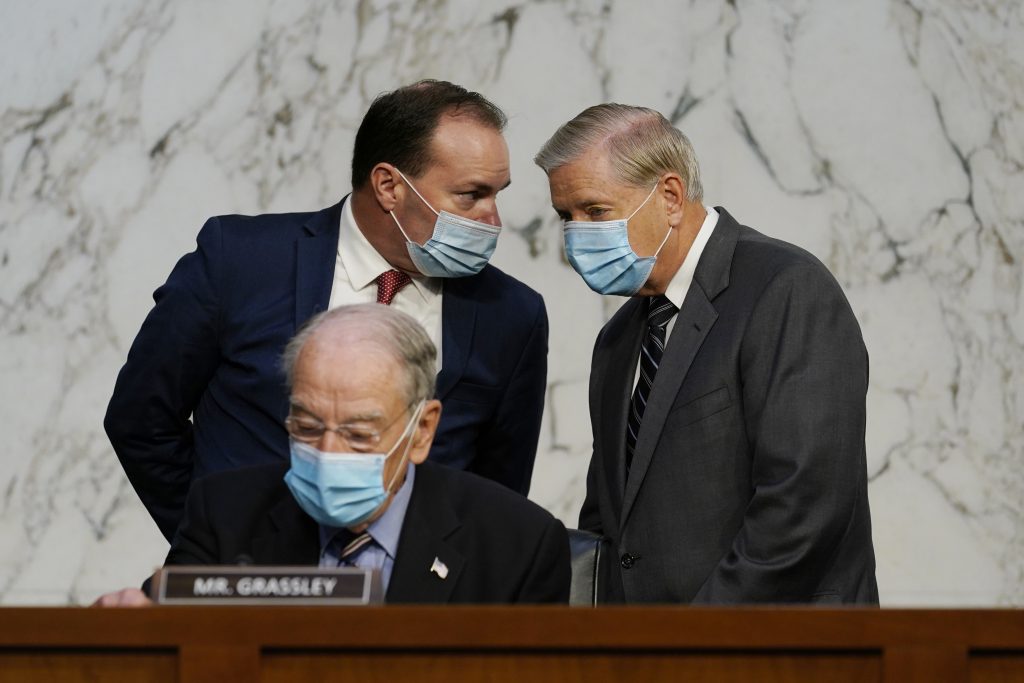 They’re holding it under difficult political circumstances: during a pandemic that has sickened at least two Republicans on the committee, and three weeks before a presidential election as many Americans are already voting, and with a poll showing that a slim majority of Americans oppose moving forward now. Republicans four years ago opposed an election-year Supreme Court nomination when it would have helped Democrats rather than them.

Against that backdrop, Republicans knew they needed to be proactive about talking about why this hearing should happen now. Their argument came down to two points.

First, the same party is in control of the White House and the Senate now, so it’s different from 2016 under President Barack Obama. (The reality is that there isn’t much data to draw on, because election-year vacancies are rare. Justices don’t leave then if they can help it.)

And Democrats are using the process to attack this nomination because they can’t attack Barrett’s qualifications.

“There’s nothing unconstitutional about this process,” said Senate Judiciary Chairman Lindsey Graham, R-S.C. “This is a vacancy that’s occurred, the tragic loss of a great woman. And we’re going to fill that vacancy with another great woman. The bottom line here is that the Senate is doing its duty constitutionally.”

Barrett’s membership in a conservative faith group that encourages women to be submissive to their husbands generated headlines in the lead-up to her hearings. She hasn’t talked about this publicly, and the group has scrubbed mention of her from its website. But her opening statement pushed back on the narrative.

“When I went to college,” she said, “it never occurred to me that anyone would consider girls to be less capable than boys.”

Barrett also said all the right things about how she would apply political independence to her review of the law. “When I write an opinion resolving a case, I read every opinion from the perspective of the losing party,” she said. “I ask myself how I would feel if one of my children was the party I was ruling against.”

That will do little to assuage Democrats as they question her in the coming days, but she didn’t open herself up to further criticism on either front.

Democrats can’t stop a Republican majority on this committee and in the Senate from pushing through Barrett’s nomination. It appears Republicans have enough votes on both to do so over unified Democratic opposition. Democrats also can’t stop a conservative court’s consideration in November of whether the Affordable Care Act should stand, with or without Barrett on it.

So Democrats’ strategy is more focused on the election than the task at hand. They want to remind voters what is at stake with a conservative-majority court, by talking about health care in these hearings a lot.

Democratic senator after Democratic senator shared stories of constituents who rely on the Affordable Care Act, also know as Obamacare – a woman needing expensive kidney treatment, or a child with a heart defect, who require expensive health care and protections for coverage with preexisting conditions. And then they pinned Senate Republicans, especially the ones up for reelection on this committee, to the potential downfall of the law. The court with the Justice Ruth Bader Ginsburg on it upheld Obamacare; Barrett wrote critically about decisions that did so. And more than one Democrat brought up how Trump has hinted that he wants his Supreme Court justices to knock down Obamacare.

At least one Republican tried to fire back: “Every single member of the Senate agrees that preexisting conditions can and should be protected, period. The end,” Sen. Ted Cruz, R-Texas, said.

The last time Democrats talked about Barrett’s Catholic faith in a judicial hearing – for her seat on a federal court in 2017 – it didn’t go well. The top Democrat on the committee, Sen. Dianne Feinstein of California, questioned Barrett’s faith and how it influenced her legal thinking (“the dogma lives loudly within you, and that’s of concern”) in a way that opened Democrats up to attacks they were applying an unconstitutional religious test.

So they’re trying to avoid that now. It could be a tricky line to walk as Democrats bring up the possibility the court with Barrett on it could severely restrict or overturn Roe v. Wade.

But Republicans see an opening to make it sound as if Democrats are the ones who are extreme. So they gave lots of quotes like this one from Sen John Cornyn, R-Texas, summarizing what he said were attacks on Barrett: “America’s secular cultural elites aren’t sure that a faithful Christian can be entrusted with the law.”

It’s a battle line that Democrats don’t want to be drawn across.

Barrett’s nomination announcement at the White House turned out to be a coronavirus superspreader event. It led to a hospitalized president and Senate Republicans canceling regular business. But they’re under a tight timetable to get this nomination done before the election, so this hearing is on. That’s despite the fact that two Republican senators are recovering from the virus, and two more self-quarantined.

All these GOP senators need to get better to vote in person on Barrett’s nomination, or their carefully timed confirmation process could be in peril. Meanwhile, Democrats are bashing Republicans every step of the way for even holding it.

“We should not be holding this hearing when it’s plainly unsafe to do,” said Sen. Patrick Leahy, D-Vt.

Graham talked about the steps taken to ensure safety in the hearing while plowing ahead with the hearings despite coronavirus risks. “I made a decision to try to make the room as safe as possible, but to come to work. Millions of Americans are going to work today,” he said.