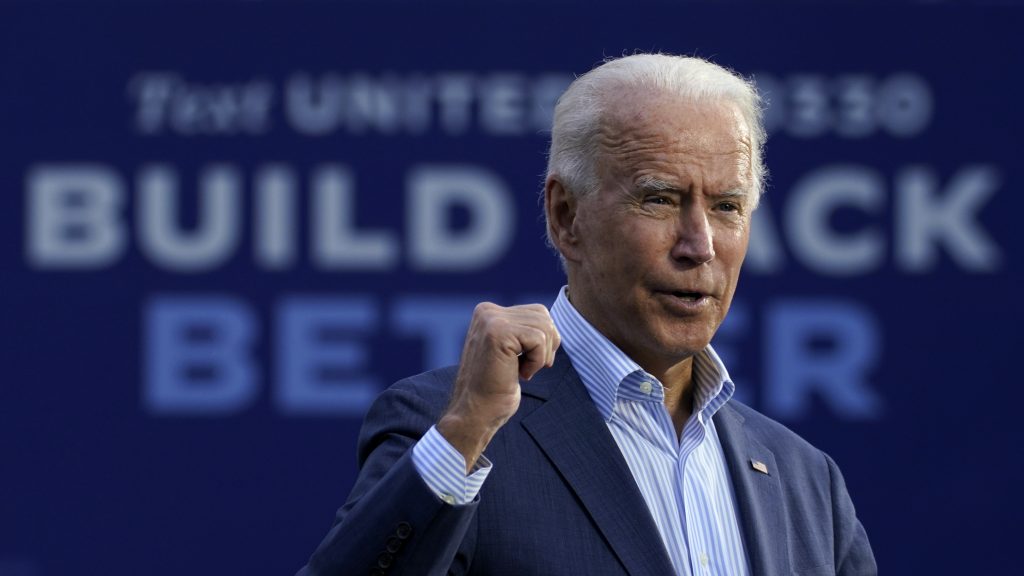 A top aide to Joe Biden on Sunday refused to say whether the Democratic presidential nominee would “pack” the Supreme Court if elected, leading to intensifying attacks from Republican foes, including President Donald Trump.

On CNN’s “State of the Union,” Biden deputy campaign manager Kate Bedingfield repeatedly dodged the question of whether he would add justices to the bench if Judge Amy Coney Barrett is confirmed, saying Biden had probably answered the question 15 times over the past week.

“I am not going to play Donald Trump’s game,” Bedingfield told host Jake Tapper. “I am not going to allow the terms of this debate to shift to a hypothetical that assumes, by the way, that the Democrats are going to lose.”

She said the GOP’s effort to secure Trump’s nominee before Election Day – and the potential consequences of a 6-to-3 court tilted in conservatives’ favor – should remain the focus.

“I think a serious policy question is not a game, and I don’t think it’s Trump’s game,” said Tapper, who noted that Bedingfield was “deftly sidestepping” his queries.

The interview, quickly clipped and disseminated across right-wing social media channels, capped a week of questions on this issue from reporters, all of which Biden declined to answer, saying it would distract from the real issue. But Biden’s refusal to engage in hypotheticals about the size of the Supreme Court has generated more news coverage about it.

The Trump campaign on Sunday claimed that Biden was “refusing to come clean on his plans to rig the Supreme Court in the far left’s favor.”

Trump tweeted that Biden refused to answer “because his puppet masters are willing to destroy the U.S. Supreme Court.” Similarly, during last week’s vice-presidential debate, Vice President Mike Pence declared that Biden and his running mate, Sen. Kamala Harris, D-Calif., were going to pack the Supreme Court “if they somehow win this election.”

Despite the attacks, Biden’s advisers and allies have calculated that it would be riskier to answer than it is to dodge. Clear opposition could upset liberals, they worry, and outright support would give Republicans an issue to cast Biden as a radical.

His advisers have also long thought that the topic animates Washington insiders but does not guide the decisions of average voters – which is one reason they rushed to make clear that Biden opposed the “defund the police” movement but have not offered a clear response on court-packing.

Many voters, they say, are not familiar with the intricacies of the high court and are less likely to have a strong opinion about the number of justices.

But avoiding the question altogether is a shift for the candidate. Before Justice Ruth Bader Ginsburg’s death, Biden publicly opposed the idea of adding more justices to the Supreme Court. “I’m not prepared to go on and try to pack the court, because we’ll live to rue that day,” he told Iowa Starting Line in July 2019.

“I think it’s a bad idea,” he said in August 2019 during a trip to Iowa. “It will come back to bite us. It should not be a political football.”

“I would not get into court-packing,” Biden said at an October 2019 debate. “We had three justices. Next time around, we lose control, they add three justices. We begin to lose any credibility the court has at all.”

When asked whether he would add justices, Biden has said that it’s a fair question and that he understands why it is being asked. He has even acknowledged that an answer would make a lot of news. But he has declined to say whether he agrees with those in his party who want to expand the number of justices on the Supreme Court.

That non-answer has increased interest, with reporters at each of Biden’s campaign stops asking about his court-packing position nearly daily.

And in recent days, Biden has become more defensive under questioning. “You will know my opinion on court-packing when the election is over,” Biden told reporters in Arizona on Thursday.

The next day, a reporter from KTNV in Las Vegas asked him about court-packing in an on-camera interview, adding that it was the top issue viewers had asked about in the past couple of days.

“Well, you’ve been asked by the viewers who are probably Republicans who don’t want me continuing to talk about what they are doing to the court right now,” Biden responded.

“Well, sir, don’t the voters deserve to know?” the reporter followed up.

“No, they don’t des-” Biden said before cutting himself off. “I’m not going to play his game,” he added, in a reference to Trump.

Republicans have seized on Biden’s non-answer, using it to suggest that Biden is hiding from voters. Sen. Ben Sasse, R-Neb., said on “Fox News Sunday” that it is “grotesque” that Biden has not said whether he would pack the court.

He added: “They’re talking about doing that to pack the Supreme Court.”