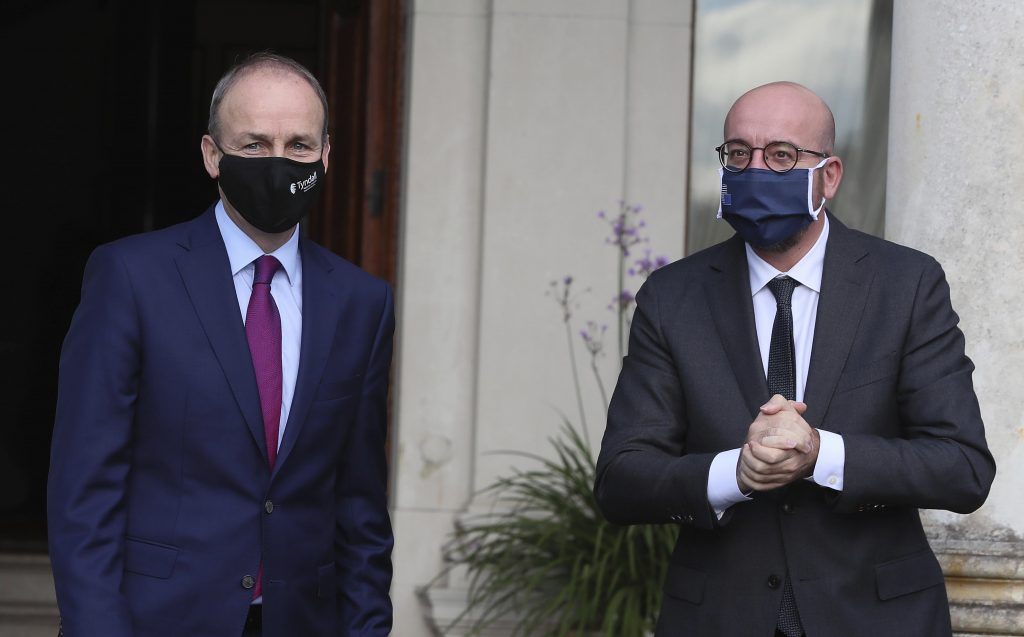 The European Union finally sees progress in trade talks with the United Kingdom, but insists a momentary change in mood between the oft-bickering sides is no guarantee that an agreement will be delivered on time, officials said Thursday.

Both sides are negotiating against the clock to get a basic trade deal delivered by the end of the month so that it can be approved by legislators in time to meet an end-of-year deadline with a transition period in the wake of Britain’s departure from the bloc.

British Prime Minister Boris Johnson wants a deal already by the time the EU leaders hold a summit next Thursday while the bloc’s nations feel there is time until early November.

“I would say that the mood appears to have changed,” Irish Prime Minister Micheal Martin said when he hosted European Council President Charles Michel. “But the mood is one thing. It does need substance to follow the mood,” he added, urging the negotiators meeting in London this week to speed up progress.

Michel acknowledged time was running out on a potential agreement that could save hundreds of thousands of jobs on both sides of the English Channel.

“The coming days are crucial. This is the moment of truth,” Michel said.

In diplomatic delegations in Brussels where member states eagerly follow the talks EU negotiator Michel Barnier has with his counterpart David Frost, there is the same sense of change in the air.

But they also acknowledged that on the three main sticking points — a deal that UK companies won’t seek to undercut their EU counterparts with low-standard products and excessive state aid, rights of EU fisherman to British waters and the governance overseeing the agreement — the sides have barely moved.

“We need significant steps to be made by our British friends in the coming days, not only on fisheries, but also on the level playing field and governance,” Michel said.

Especially on governance, the EU nations have become even more wary of Britain, after Johnson last month proposed plans on British trade with Northern Ireland that even the U.K. government acknowledged are in breach of the Brexit withdrawal agreement it signed with the EU.

“It’s now for the U.K. to restore trust and to put all its cards on the table,” Michel said.

In London, the government said the talks would go on straight through to next week’s EU summit.

British Prime Minister Boris Johnson’s spokesman, James Slack, said that “we have been perfectly clear about the need to work towards the Oct. 15 European Council. The EU has agreed to intensified talks. Those have been taking place this week and you will see more of them next week.”

If passed into law, the contested U.K. Internal Market Bill would undermine the EU’s previously agreed oversight of trade to and from Northern Ireland, which is part of the U.K and shares a border with EU member Ireland.

The bloc is furious that Britain plans to breach portions of the withdrawal treaty that were put in place to maintain an open Irish border, which has underpinned peace since Northern Ireland’s 1998 Good Friday accord.

“What’s at stake is what we cherish most. The Good Friday Agreement, the peace and stability of the island of Ireland and the integrity of the single market. This is not only an Irish issue. This is a European one,” said Michel.