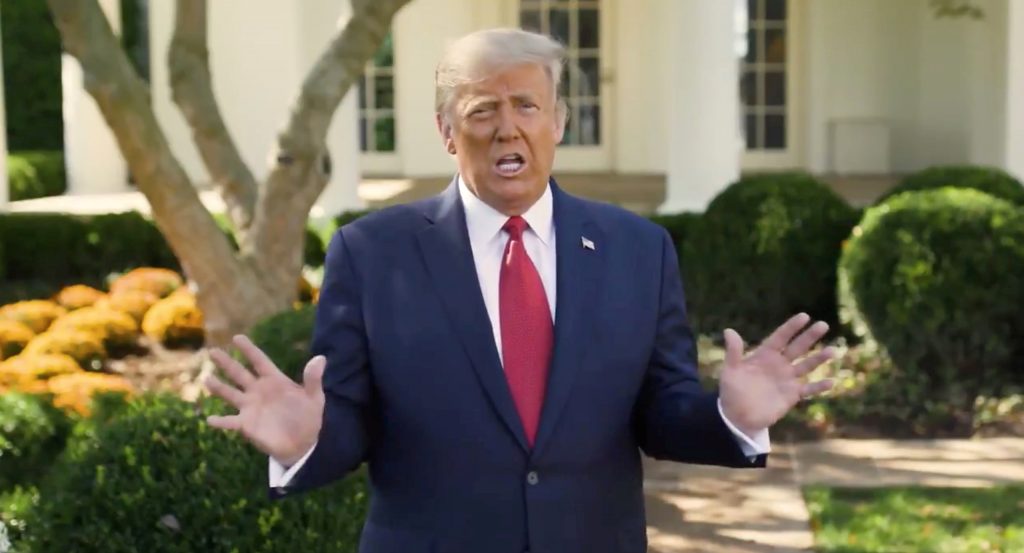 President Donald Trump, still confined to the White House where he is being treated for COVID-19, planned more steps on Thursday to try to reinvigorate a re-election campaign hit hard by his handling of the pandemic.

Trump is scheduled to appear in his first media interview since revealing last Friday he had contracted COVID-19. Fox Business Network said the interview would air on Thursday after 8 a.m.

Itching to get back out on the campaign trail since leaving a military hospital on Monday, Trump has called off negotiations with Congress for a fresh round of stimulus for the ailing economy and declared in a video that his illness was “a blessing from G-d.”

“I think this was a blessing from G-d that I caught it. This was a blessing in disguise,” Trump said in the video posted to his Twitter account on Wednesday, adding his use of an experimental medication from Regeneron Pharmaceuticals Inc had allowed him to experience first-hand how effective it could be.

He vowed to make the treatment available free of charge, but did not say how he would do that or who would pay the cost of the treatments. The United States is currently reporting more than 44,000 new COVID-19 infections each day.

Trump himself has not been seen in public since he flew by helicopter on Monday from Walter Reed Military Medical Center outside Washington to the White House.

Despite his illness, Trump has been looking for ways to get his election message out and cut into Biden’s lead in battleground states, advisers said.

A speech to senior voters is being contemplated for Thursday, they said.

Aides said Trump was impatient to return to campaigning and insistent on going ahead with the second presidential debate on Oct. 15 in Miami, although Biden said on Tuesday he would not participate if Trump was not virus-free.

Trump has had no COVID-19 symptoms for the past 24 hours, his doctor, Sean Conley, said in a statement on Wednesday

“He’s now been fever-free for more than four days, symptom-free for over 24 hours, and has not needed, nor received, any supplemental oxygen since initial hospitalization,” Conley said.

“The American people have witnessed what is the greatest failure of any presidential administration in the history of our country,” Harris said.

A wave of infections at the White House among Trump‘s top lieutenants and press aides has left the West Wing struggling to find its footing. At least 19 people close to Trump have tested positive.

Trump has depicted himself as a man who vanquished the disease and emerged stronger, telling Americans not to be afraid of COVID-19. Harris faulted him for failing to be honest with the American people about the risks posed by virus.

The latest Reuters/Ipsos poll, conducted from Friday to Tuesday, found that 56% of U.S. adults disapproved of Trump‘s handling of the coronavirus, with just 38% approving. Two-thirds said they believed he could have avoided becoming sick if he had taken the disease seriously, rather than eschewing face coverings and social-distancing guidelines.

In his video address, Trump repeatedly stressed how well he felt so far in his recovery from COVID-19. His doctors have provided only limited details about his condition.

The video’s release followed White House assurances that the 74-year-old president was back at the Oval Office on Wednesday, getting briefed about economic stimulus talks and Hurricane Delta.