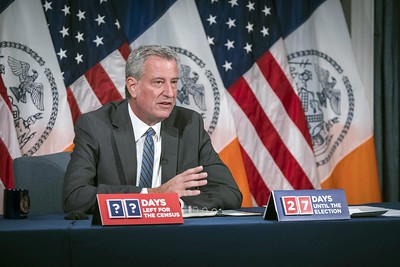 On Wednesday, New York City Mayor Bill de Blasio announced schools and non-essential businesses would be closed, and places of worship restricted to ten people, in Brooklyn and Queens neighborhoods that have been designated coronavirus ‘red zones.’

“[If] we act quickly and decisively, we can overcome this for all of us, for the whole city. And what are we being governed by? The facts, the science, the data tell us what’s happening, and we act on it. That is the one thing that has worked in this country and all around the world. So, we to stop this outbreak dead in its tracks for the good of all New York City,” said de Blasio.

Red zones are defined as neighborhoods with a 3% positivity rate over seven days.

The restrictions will be in place for fourteen days, and will be extended if the the case numbers do not go down.

People who organize mass gatherings can incur fines of up to 15 thousand dollars, and individuals who are not wearing masks or social distancing may be fined up to a thousand dollars.

Jewish communities in Brooklyn and Queens, such as Borough Park and Kew Gardens, are red zone areas.