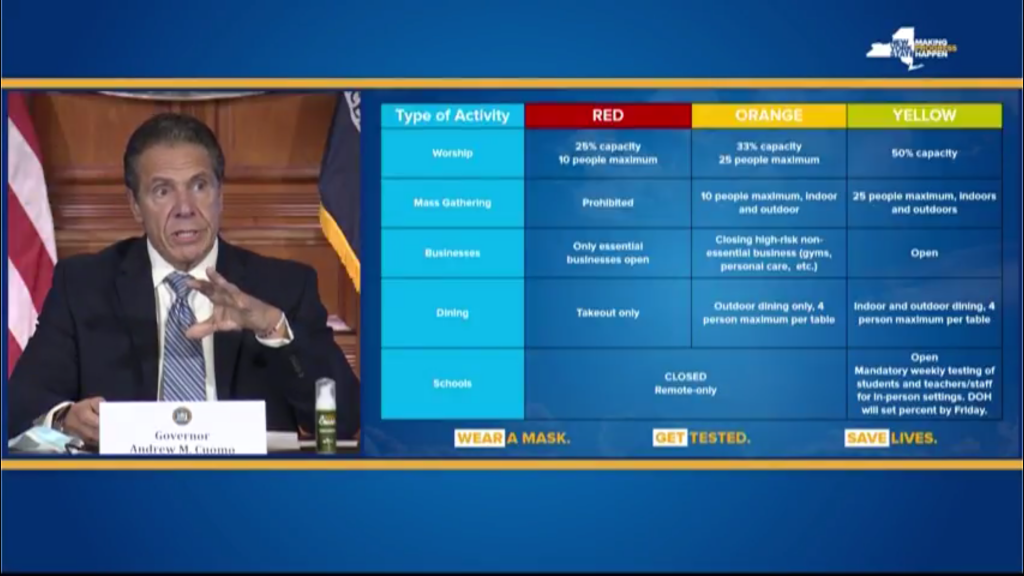 Jewish leaders said they were blindsided by New York Governor Andrew Cuomo’s announcement on Tuesday afternoon that houses of worship in the areas with coronavirus outbreaks would be restricted, with some allowed as few as ten worshipers. This came just hours after the Governor convened a conference call with community leaders, asking them for help in reducing occupancy in shuls to 50%.

During the call with Jewish leaders Tuesday morning, Cuomo indicated that if community leaders enforced the 50% guideline, shuls would not be closed. He said, “The current rule is no more than 50%. In any indoor gathering 50% of capacity … in a synagogue in any venue, any private venue. It’s 50% of capacity. That’s the current law. We have to follow that law. If we don’t follow that law then the infection rate gets worse. Then we’re going to have to go back to closedown. And nobody wants to do that. But I need your help in getting the rate down, and the rate will come down if we follow the rules on the mask and the social distancing and the 50%.”

Later that day, the governor announced that houses of worship in coronavirus hotspots could have a maximum of ten people at services, and non-essential businesses in those areas would be closed, in addition to his Monday announcements that schools in hotspots would be closed.

A participant on the call who spoke to Hamodia on the condition of anonymity expressed frustration with how it transpired, and stressed that Cuomo never indicated he was prepared to take such extreme measures when it came to shuls. “The governor stabbed us in the back by announcing this unprecedented lockdown, and he has the audacity to say that he discussed it with Orthodox leaders and they were very receptive. This is just unbelievable. This is something that our community will never forget. We were looking forward to the opportunity to finally speak directly to the governor, as we were promised.”

The participant added that the only questions Cuomo answered were several “softballs,” which he later found out were pre-approved by the governor’s office, which added to the overall feeling of mistrust.

The participant attempted to address Cuomo by pressing the button he was told to use to put a question forward, but it never went through.

“I along with my fellow community activists and leaders on the call were shocked to hear the governor ask his operator: “are there any other questions” and then we hear operator respond “there are no other questions sir,” and the call was promptly ended.” The participant later found out the questions had to be pre-approved and believes his attempt to raise a question was deliberately ignored.

“Had the governor taken my question,” the participant said, “he would have heard how detached from the reality on the ground he is. He would have perhaps heard how his draconian proposals are unfair to people who already suffered through the virus. In fact, we were ready to propose that over the holidays only people who have tested positive for antibodies should participate in shul gatherings. Instead the governor pretended that he was ready to listen to us…he lied to us. After telling us that he’ll limit shul participation to 50% capacity, he placed a limit of 10 people. We all feel used, targeted and enraged.”

Jewish organizations and community leaders have condemned what they deem to be Cuomo’s duplicity. Many expressed frustration they were not given a warning during Cuomo’s conference call.

Community activist Chaskel Bennett, who was not on the call but spoke to people who were, told Hamodia, “What Governor Cuomo did today was blindside community leaders who had already been working hard to tamp down on rising coronavirus numbers.” Bennett noted, “there was absolutely no discussion of reducing houses of worship to ten, and communal leaders feel completely betrayed by the governors unilateral decision. It has alienated an already skeptical and suspicious community, making it that much harder for leaders to get the community to buy in on important safeguards needed to stop the spread. The anger and dismay is real. Our schools and shuls are the lifeblood of the community. I worry this sets us back significantly in the ongoing fight against the deadly virus.”

In response to Hamodia’s request for comment as to why the governor indicated on the call that he would stick to a 50% limit but then enacted a 10-attendee limit, a Cuomo spokesperson said, “We were still in discussions with the epidemiologists at the time and they made clear that preventing large social gatherings is the key to breaking up these clusters.” The spokesperson did not respond to Hamodia’s request for comment on allegations about the governor only taking pre-approved questions.

In a statement, Senator Simcha Felder, Assemblyman Simcha Eichenstein, Councilman Chaim Deutsch and Councilman Kalman Yeger strongly condemned Governor’s Cuomo’s decision. They noted that though they represent the neighborhoods facing coronavirus outbreaks, they have not been involved in the decision-making process on how to best address the uptick in infection rates.

They vowed to continue to educate their communities on the importance of social distancing and masks, and indicated they would push back against the shul closures, stating, “Americans are constitutionally permitted to worship freely, and Governor Cuomo may be assured that we intend to exercise that right without his interference.”

In a statement published by Agudah, the organization indicated it would once again sue the Cuomo Administration for religious discrimination. The organization added that regardless of its opposition to the shutdown, it urged compliance with health guidelines.

Following the outcry after Tuesday’s events, protests were held that night in Boro Park. At the protest, Yeger told the crowd, “We are not going to be deprived of the right that we have in America, like everybody else in America — the right to observe our religion.”

While the protests were largely peaceful, some turned ugly: A group of teenagers among the protestors blocked a city bus, and according to social-media reports, an Orthodox Jew opposed to the protestors was attacked and hospitalized.

Video clips from the protest, widely disseminated in the media, also show a news photographer being pushed by protestors. Boro Park resident Mendy Teitelbaum told Hamodia that he was among those who pushed the photographer, because, he says, the photographer was “deliberately harassing” people.