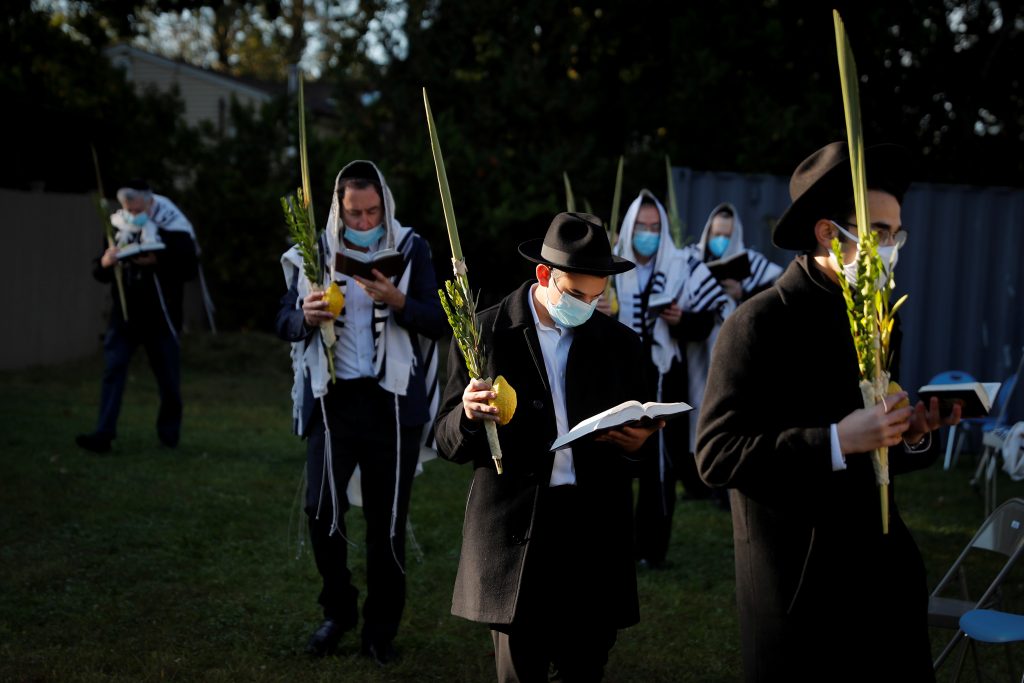 Rather than crowd into a synagogue, the group has congregated outside a neighbor’s house each day to observe the week-long festival of Sukkos, one of many Jewish holidays this time of year coinciding with a sharp rise in coronavirus cases among members of this insular religious community.

Rockland County, encompassing Monsey and lying about 40 miles (64 km) north of New York City, is one of the state’s most troubled hotspots. Since March, nearly 700 of its people have died from COVID-19, more than in 15 individual U.S. states, according to a Reuters tally.

A recent spike in infections after a summer lull has been a somber reminder that the virus is still spreading, especially in places where large groups gather for religious or other reasons without adhering to public health guidance.

The open-air service is one of many adjustments that Orthodox Jews throughout the world have had to make in their traditions. The High Holiday season that includes Rosh Hashanah and Yom Kippur is typically marked by mass prayer services, big family meals and travel. The celebrations traditionally feature group dancing. All of that now is curtailed because of the virus.

Two Rockland zip codes had positive coronavirus test rates top 15% over the weekend, compared to the state average of just over 1%, according to New York Governor Andrew Cuomo.

The viral spread has been especially acute in the Orthodox Jewish enclaves of Rockland County, as well as in New York’s Orange County and Brooklyn, areas where the governor says social distancing and mask-wearing have not been adequately enforced.

A drop in infection rates prompted some people – including, but not limited to, Orthodox Jews – to become more lax about mask-wearing and social distancing, several members of the Orthodox Jewish community told Reuters.

“It’s critically important for everybody to buy into this,” said Rabbi Dr. Aaron Glatt, an associate rabbi at an Orthodox congregation in Woodmere, New York, and chief of infectious diseases at Mount Sinai South Nassau.

Tuvia Rotberg, a bookstore owner, hosted the outdoor Sukkos services in a white, open-air tent. He launched outdoor services for daily and Sabbos prayers just as the pandemic gripped New York in March and has kept them up, even though synagogues now are open with limited capacity.

On Tuesday, Cuomo planned to meet with Orthodox Jewish leaders in Rockland and Orange counties and Brooklyn, after announcing the state would enforce mask mandates and social-distancing laws in those areas.

This week he ordered that schools be closed in 11 New York City neighborhoods where a high concentration of Orthodox Jews live. He also said he might enforce a new round of business and school shutdowns in Rockland County.

“I have to say to the Orthodox community tomorrow, if you’re not willing to live with these rules, then I’m going to close the synagogues,” Cuomo told reporters on Monday.

Health officials in Orange County on Tuesday shut down schools in the Village of Kiryas Joel and the Town of Palm Tree, which have large Orthodox Jewish populations, because of a burgeoning outbreak, News 12 Hudson Valley reported.

If there was nonchalance at the end of the summer, recent hospitalizations of friends and family have forced many Orthodox Jews to acknowledge the severity of the situation, community members told Reuters.