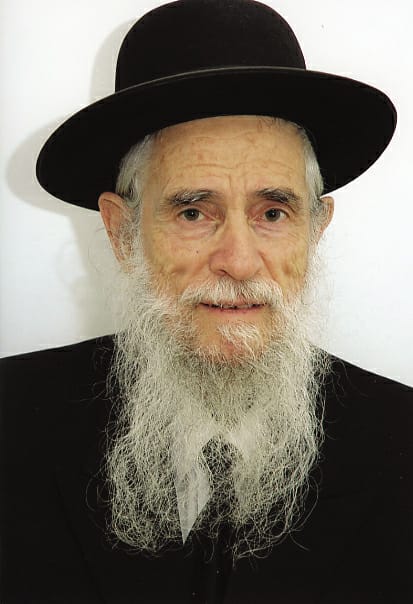 Hamodia is saddened to report the petirah of Harav Mordechai Cohen, zt”l, a Rosh Yeshiva of Slabodka Yeshiva and one of the leading marbitzei Torah.

Harav Cohen fell ill three years ago, and went into remission after treatment. However, the disease returned, and many davened for the recovery of Rav Mordechai ben Chaava. To their chagrin, his condition deteriorated and he returned his lofty neshamah to its creator on Monday, the third day of Succcos.

Rav Chananiah Tsulek stayed at his bedside in Bnei Brak and attended to him in his final days.

Rav Cohen was recognized for his tzidkus and anivus. The talmidim looked forward to the uplifting shmuezen that he delivered during Elul.

His close students were aware that he was well versed in the sifrei kabbalah, which were at times found hidden on his desk among his other seforim. He was known to have learned with some of the mekubalim with whom he had an discreet connection.

Nevertheless, he personified the “gadlus ha’adam” of Salbodka. His arrival at Kiryas haYeshiva projected a majestic atmosphere as the shine of his face, which was reminiscent of the days of glory of the past, was apparent even in the distance.

His tefillos were like counting coins, with a rare inner calm. He never raised his voice nor showed any anger, and was described by his serenity.

For half a century, he imparted Torah and yiras Shamayim at the Salbodka Yeshiva, teaching hundreds of talmidim throughout the years alongside the other roshei yeshiva, with whom he had a special bond.

In his shiurim which he delivered in the yeshiva, he would begin by slowly and patiently explaining the intricacies of the sugya, without any urgency or extraneous words. Only after seeing that the talmidim grasped his trend of thought and understood well the first basis of his sevara would he move on to the next steps in the sugya.

The last time he came to give a shmuez in the yeshiva was on Shabbas Chazon. Although he did not feel well that week, he nevertheless fortified himself to come. As he entered the car, he sighed and said, “What do I have left in my life today, how can I benefit the yeshiva? If they request a favor which requires a bit of perseverance in order to deliver a shmuez, I must brace myself and come.”

During that shmuez, although he was behind a special barrier built for the roshei yeshiva, Rav Cohen delivered the entire shmuez while wearing a mask, despite the difficulty it involved. He explained that he did it to prevent an chillul Hashem, and so that people should not be lenient in complying with safety guidelines.

The Rosh Yeshiva left over descendants who follow in his exalted ways.