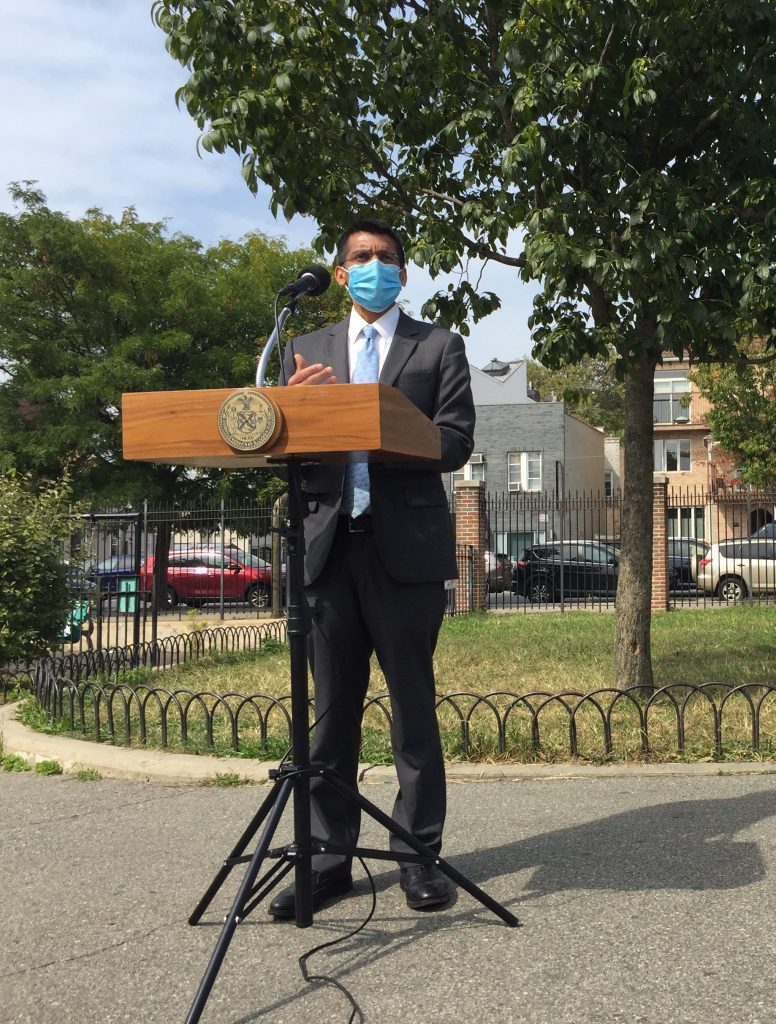 Months after New York City appeared to be winning the war against COVID-19, the virus is making a resurgence in some neighborhoods. While the latest outbreak, which began in mid-August, is nowhere near the deadly peak in March and April, as of Wednesday 10 zip codes in Brooklyn and Queens (out of 146 in the city) had exceeded the city’s threshold of a 3% COVID-test positivity rate, including four above 5%; and another seven areas are between 2% and 3%.

Officials are conducting outreach in affected areas, some of which include large Orthodox Jewish populations, stressing the importance of following health guidelines – such as wearing masks, avoiding large gatherings, social distancing and washing hands – and urging people to get tested. But they have also warned that if infection rates continue to rise, the city may impose severe restrictions on affected areas.

In a phone interview Thursday evening, New York City Health Commissioner Dr. Dave Chokshi spoke with Hamodia about the city’s efforts to stop the spread of a virus that has infected nearly 240,000 New Yorkers and killed over 23,000.

The Jewish community in New York was hit very hard by COVID-19 in March and April. Then, for four months, according to multiple medical officials in the community I have spoken with, there was virtually not a single COVID-related hospitalization in the Jewish community. What do you believe happened now that all of a sudden, after four months, the numbers started going up again in August?

It’s an important question. And I think the backdrop is what happened in March and April, but we also forget that in February it was similar: it ramped up so quickly, before the tragedy that we experienced in March and April. And I think what happened over the summer was unfortunately a similar prelude, with respect to probably a small number of cases in the community, but potentially some travel, some people who became complacent with respect to the ways in which we can prevent spread of the disease. And then more and more people unfortunately not taking the precautions that we needed, that allowed the virus to spread again in the community, and that’s what we’ve observed over the past couple of months.

Health officials have cautioned that people shouldn’t assume that because they have antibodies they can’t get the virus. But when I asked you at a recent press conference [about whether anyone with antibodies has subsequently been re-infected], you said that there’s a single-digit number of people worldwide who have had antibodies and then got sick again. I think a “single-digit number worldwide” is pretty much like saying it’s zero. So why should people who have antibodies not believe that they’re immune?

This is another really important area to clear up. I would make a distinction: what I said was that there are a single-digit number of cases in terms of people who have had a confirmed infection then becoming re-infected. That is slightly different than looking at someone who has had an antibody test come back positive.

So you’re saying it’s a single-digit number of people who got infected and then later re-infected, but you don’t know if those necessarily had antibodies. So in other words, it’s possible that of those that have had antibodies, the number of re-infected is zero?

It’s possible – but it’s also possible that it’s significantly higher. We just haven’t had the science to be able to say exactly what it is, which is why our guidance on antibody tests is very clear: regardless of what your antibody-test result is, you have to take all of the same precautions with respect to wearing a face covering and doing the distancing, etc., because we unfortunately just don’t have the hard facts right now that if you have a positive antibody test, it actually means that you’re protected.

Health officials are saying they believe that antibodies last for three months. But since you said there are no confirmed cases of anyone that had antibodies and later got re-infected, on what basis are they giving this three-month timeline?

The three months is also not a hard-and-fast rule. In some cases, antibodies wane sooner than three months; it might be later than three months as well. But the key point, and I want to repeat it, is that we don’t know that having antibodies is actually protective against infection with COVID-19. So nobody should change their behavior even if they have a positive antibody test.

We do know that many of the cases are in the Orthodox Jewish community, so that we can say is the case. Based on the spread that we’re seeing geographically, it’s very possible that it is in other cultural and ethnic groups as well.

And really, what it highlights is that we want to make sure that regardless of who it is, we try to contain the spread of the virus. Because the virus doesn’t respect any of our boundaries when it comes to religion or ethnicity or culture.

The Health Department has said that if the numbers don’t improve, it could impose massive restrictions in these areas, like limiting gatherings to 10 people and closing non-essential businesses. Is there a particular statistic that would trigger that? As long as officials continue to see that people are keeping the guidelines and making an effort to slow the spread, they won’t enact these restrictions? Or is there a specific statistic that, if it kicks in, officials would enact these restrictions?

There’s not a specific criterion or a threshold that I can give you. But the way that we think about it is really with respect to trying to prevent further spread, and particularly to try to prevent a citywide resurgence. So we want to do the things that we can in a more local way, because we think that that will be effective in trying to contain the spread.

I want to ask you about schools. There’s been some unhappiness among some of the communal leaders with the notion that if a school, which has maybe spent tens of thousands of dollars to implement social distancing, partitions etc., and maybe the school has a thousand kids, and if two kids get a positive test, they close the school. What exactly is the criteria for closing a school?

The distinction is when we find out about cases, there’s a specific threshold that we use to figure out when either a classroom should be shut down – which we recommend if there are one or more cases in a specific classroom, then everyone in that classroom should be quarantined – and then if there are multiple cases in the school, then we want to do what we do, which is investigate, learn a little bit more about the situation of the cases and figure out fundamentally whether there’s evidence of transmission occurring within the school; versus it reflecting transmission that’s occurring elsewhere in the community. Sometimes that does mean that we will recommend that a school closes down during the duration of the investigation while we sort those things out. And then, based on the results of the investigation, that’s when we make the determination if there is evidence of transmission occurring within the school itself, meaning that many, many people within the school are at risk of having been exposed – then we may, in those cases, recommend that the entire school close down for 14 days.

So I want to distinguish between the two different reasons that we may recommend a school close down: one is during the duration of the investigation; and then the other one is if we have evidence of transmission within the school, [it would close for the] 14-day quarantine period.

You and other health officials have had conference calls and discussions with Jewish leaders. But some of those leaders, while they say that they’re fully committed to doing whatever it takes to slow the spread, are also unhappy with the way that officials have gone about things: Last week, Thursday afternoon there was a conference call with some Jewish leaders; and then they say they were just blindsided by this email that went out from the Health Department Thursday night saying it would impose restrictions if the numbers don’t improve. They felt like there was this feeling [on the conference call that], “We’re going to work together to improve things,” and then all of a sudden they were just blindsided by that message. Similarly, on Friday there was a press conference where you and other officials said you want to work with the community, in a very positive tone, and then Friday evening, with no warning to the schools or to any leaders, a Commissioner’s Order [was announced, putting schools on notice that any violation of guidelines may result in closure]. Can you respond to that?

There are two things, and both are true. One is we are fully committed to working with community leaders and representatives – and you can just look at what we have done over the past two months, overlaid over the past several months, as evidence of our commitment to that. The second thing is that we must move swiftly at times to be able to effectively contain the spread of the virus.

And so we have to do both in concert: always trying to keep communication with the community open and as much dialogue as possible, but then, when it does look like there are steps that we have to quickly take to contain the spread of the virus, to not delay in doing that. Our job is to try to do both as effectively as possible at the same time.

Do you, in retrospect, think that anything was wrongly handled?

And so those are things that we’re committed to doing.

Officials are repeatedly saying people should get tested. I got a rapid test today, which was negative. If I don’t feel sick, when should I take my next test? How often should people get tested?

That’s a very good question. It depends on your exposure and your risk, but we’re actually in the process of finalizing some more specific guidance about that, and we hope to get it out next week.